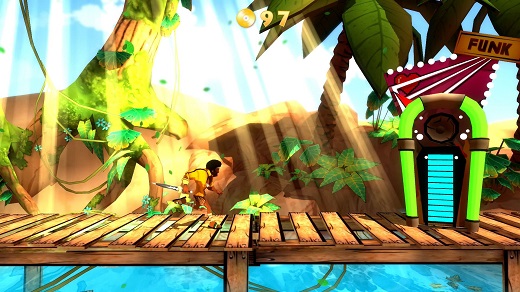 HIGH The main character can buy and wear a Jason mask. So that's good, I guess?

WTF How is the music in this music-themed game so awful?

Funk of the Titans is a two-button platformer that takes players to the ancient past where Perseus is now redesigned to resemble Black Dynamite more than any previous iteration of the mythological figure. He is dispatched by Zeus to defeat three rival musical styles to prove the supremacy of Funk, the preferred tunes of Mount Olympus. Written out, that actually sounds somewhat promising, with the potential to a likeably mad romp. Funk of the Titans isn't likeable, though, and it manages to squander what little goodwill the premise engenders through terminally awful gameplay.

Normally the purview of smartphone games, the two-button premise is attractively simple. Each level consists of Perseus sprinting headlong into danger, and it's up to the player to correctly time his jumps and sword-swings as the situation dictates. It's not a complicated formula, and if well-implemented, this kind of basic-input game can be a pleasant distraction for bite-sized bursts of gameplay. Sadly, Funk of Titans doesn't get the formula right, and its mixture of design flaws and technical shortcomings conspire to render it utterly worthless.

For a game whose options boil down to jumping over obstacles or hitting them with a sword, Funk of the Titans is shockingly buggy. Even slightly mis-timing a jump leads to getting stuck inside ledges. Taking damage would frequently lock me into a 'stunned' pose until I restarted the level, and since collision detection occasionally switches right off—which is bad, since I wasn't able to attack enemies, but good, since they weren't able to attack me, either—I was often able to march straight through all of my foes until the level was complete.

There are plenty of bugs outside of the core gameplay as well—frequent crashes, hang-ups when the game would forget to load the results screen at the end of a level, and most strangely, a bug that causes the game to log the player's account out every time they unlock an achievement, dumping them back to the main menu. I don't know if I've ever seen this many bugs in a single game before. It's simply shocking.

Even beyond the omnipresent bugs, the actual gameplay of Funk of the Titans offers little to recommend. The biggest problem comes from the fact that the developers decided to place the camera far too close to the action, presumably worried that Perseus and the enemies wouldn't be recognizable on a cell phone screen if they were too small. Not wanting the game to be unfair, the developers have everything move at an achingly slow pace to ensure that players will always have time to react to any new threat that pops up from the edge of the screen.

I can't fault their instincts at wanting to keep things playable, but the effect is to create a tediously slow game in which players watch Perseus lumber around with all the time in the world to deal with the skeletons that are out to get him. The only thing that this kind of 2-button experience has going for it is the thrill of kinetically propulsive action and instinctual twitch responses to threats, and Funk of the Titans can't even get that right.

In the stellar Rayman Legends there are a series of music themed levels in which Rayman is set barreling forward at high speeds, forcing the player to react by either striking foes or leaping over traps. The levels are constructed and timed so that the player's actions become the notes of a song—transforming it into a perfect music-themed two-button gaming experience.

That game managed, in a couple of bonus levels, to accomplish something that isn't even on Funk's radar. Setting aside gameplay, level design, and basic functionality, it can't even get the music right—the final nail in the coffin is the fact that a game supposedly themed around music has nothing to offer but beats so aggressively generic that they sound like they were ganked out of a PS1-era Crash Bandicoot game. Rating: 1 out of 10


Disclosures: This game was obtained via publisher and reviewed on the Xbox One. Approximately 6 hours of play was devoted to single-player modes (completed 1 times).

Parents: According to the ESRB, this game contains mild blood, mild fantasy violence. Don't let your children play this game. Sure, there's nothing particularly objectionable about it, but it's awful, and will make them sad.

Deaf & Hard of Hearing: You will be fine with this one. There are absolutely no audio cues that will affect your gameplay in the least.

Damn, this is sad. I wasn’t sure I was going to play FoT but from the previews it at least looked interesting. Shameful to hear it was botched in execution. Control issues and bugs aside, if a game centered around rhythm can’t provide good music, it has failed beyond all doubt.

Love the parental disclaimer. I’d like to see that in more game reviews.