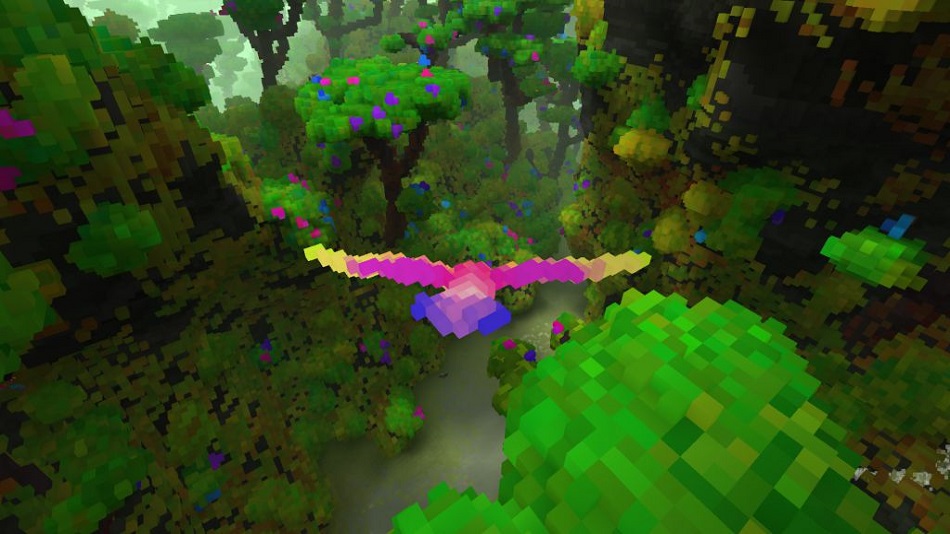 Meditative is a good word for it. Passive, or chill. Relaxing.

These are all strong ways to describe a particular style of experiential title which drop players in a location, pipe in soothing music, and let them drift through a world with no goals, objectives, checkpoints, or foes. Fugl‘s particular angle on this is to capture the thrill of flying. Despite quite a few technical issues at the moment, it’s well on its way.

Players take on the role of a flying creature that finds itself in a lush voxel-built world. They can flap to gain speed and altitude, glide for extended periods of time, or hover in place to take in their surroundings — which is all the game really offers. Luckily, there are plenty of beautiful surroundings to take in. This is an elaborate, block-shaped ecosystem, packed with birds in the sky and fish in the sea, all frolicking with no particular cares in the world. 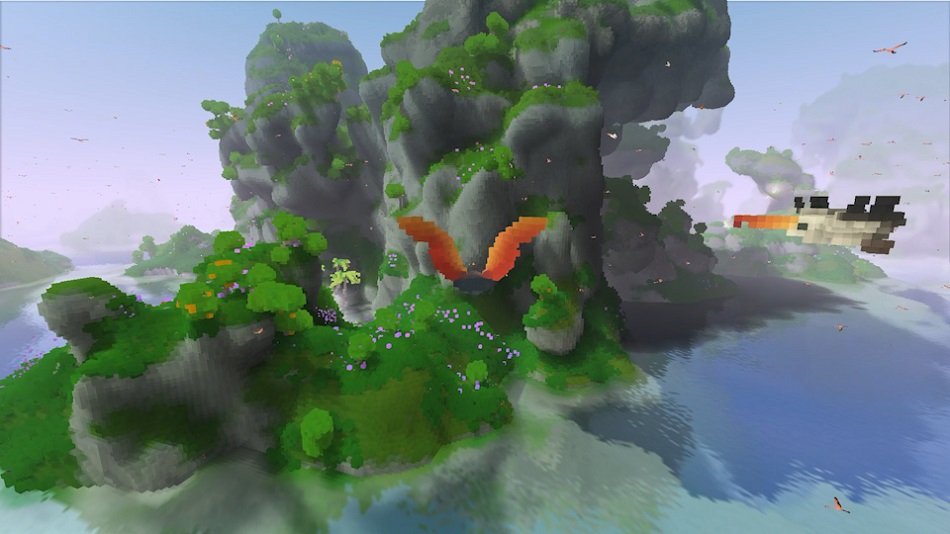 The most interesting mechanic is the way the player’s avatar transforms based on the context in which it finds itself. Fly high up into the sky and gain speed, and the bird will transform into an eagle. Dive into the water and suddenly it will morph into a flamingo or seagull. While I’m not sure what triggered it, at various points in the game I ended up as a moth and a bat. In the hour I spent in its world, I was consistently surprised by these changes, as well as the decent number of biomes I was gliding over.

At the moment, Fugl is still in Early Access and it isn’t without issues. For starters, it crashed every time I attempted to return to the main menu. The bird will get stuck in nearly any piece of scenery it touches, necessitating the frequent use of the ‘reset’ button. There’s a mirrored wall at one end of the cylinder that makes up the world which is meant to repel the player, but sometimes it will let the player through and trap them in a negative world where the bird is prone to turning black and exploding. The reset button will respawn the bird inside this nega-zone, forcing the player to return to the main menu, which, naturally, prompts another crash.

Even with these early-days technical failures, Fugl does a good job of encouraging a calm state. With its soothing music and brilliant colors, it’s a pleasure to let the bird soar and glide around its island-dotted seas, go zooming through its purple stone canyons, or dart through tiny openings in and out of caves. As a meditative experience in its purest form, Fugl is already a perfect game for lowering blood pressure. I can only imagine as development continues and bugs are ironed out, that it will only get better from here.

Kinda reminds me of “everything” with the transforming into different animals and all that.