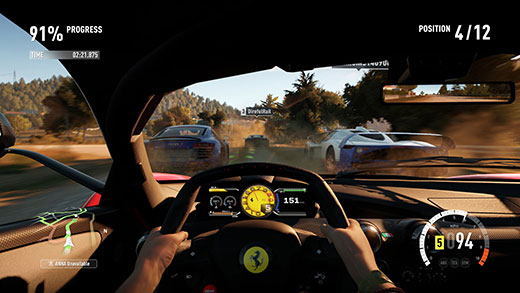 HIGH Being allowed to try drifting a hairpin turn over and over again until I get it just right.

LOW Gosh, that photography mode couldn't load slower, could it?

Microsoft's answer to the Test Drive Unlimited series, Forza Horizon 2 puts players in a miniaturized version of Southern Europe and offers an opportunity to compete in hundreds of different races with an eye towards collecting an exhaustive variety of cars. While the setting may not be as impressive as Hawaii or Ibiza, the game truly makes the genre its own with its addictive 'rival' system and daringly crafted off-road tracks.

Set at the titular Horizon Festival, the game asks players to work their way through a series of championships until they've accumulated the roughly 100 race wins necessary to be crowned victor. While that might sound like a daunting task, the game's greatest strength is its use of addictive gameplay mechanics to keep players laser-focused on their goals, always striving to improve their skills a little bit at a time.

The game's career races are broken up into dozens of 'championships' in which players select from a particular class of cars to face off in three or four races. These championships all take place in one of six hub areas of countryside that tracks are constructed around. While this is theoretically an open world title (when players aren't in a race they can drive anywhere around the map they'd like), things are kept moving forward with the inclusion of ‘road trip' competitions that make driving from one hub to another an event rather than a chore.

The game is absolutely packed with little challenges. For example, in addition to the regular traffic which populates the map, players will constantly run into AI representations of other players. These 'drivatars' (to use the game's term) can be challenged to a race at any time, with the game selecting a nearby point as a finish line, then encouraging players to reach it any way they see fit.

Even more impressive is the 'Rivals' system which constantly generates new goals for the main races. A truly inspired notion, whenever a player completes one of the main races, a notification pops up pointing out that some other player managed to complete the same course just slightly faster, then offers up a bounty for beating their time. While I'm not normally a competitive person, I found myself enthralled by the notion that someone else had cleared a race just a third of a second faster than I had. Throughout the length of my time at the Horizon Festival, I found myself playing same races over and over again, always managing to improve my driving line just a little each time. The ghost car representing another player's actual run provides the perfect motivation to keep me striving just a little harder.

Horizon is also incredibly user-friendly. Not only does every race in the game have an optimum driving line set out for players to follow, but at any given moment a race can be rewound up to roughly 15 seconds, giving drivers the chance to practice a particularly hairy turn without having to restart the whole race each time. This simple mechanic (unavailable in multiplayer) turns every race into a learning opportunity.

Forza also offers a robust tuning mode for all of its cars, giving players a chance to install new parts and adjust things like gear ratios and the downforce. I know so little about cars that none of these options meant anything to me, but I was able to tell that they have no practical effect on the single player game at all. Every car's overall stats (speed, acceleration, handling etc.) are compressed into a number from 1 to 1000, representing the car's quality. Simply put, irrespective of a driver's skill, a 278 scoring Volkswagen Beetle is never going to win a race against a 650 scoring Porsche. While it might be satisfying to buy new parts and turn it into a faster and tighter version of itself, doing so will never give players an advantage in the main game because all the opposing cars will invariably be within about 30 quality points of whatever the player is driving.

While it boasts many achievements, Forza Horizon 2 has a few drawbacks.

After playing through some championships, it became clear that while there were certainly a large number of different track layouts, there aren't nearly enough to keep surprising players for more than a few hours—by my second trip through all of the hubs I was starting to see plenty of reused courses. The hub system also gets strangely restrictive in the post-game. After winning 15 championships and becoming the Horizon victor I, somewhat naïvely, believed that the game was going to open up and let me complete the remaining hundred+ championships in whatever order I chose. This isn't the case. Instead, the game is bound and determined to lock single players into the "road trip to a hub, win one championship road trip to the next hub" model for seemingly the entirety of the single player experience. There's still plenty of open world content available in the single player game like finding rare cars in barns or beating speed trap records, it just feels strange that the races don't open up at all after the "story" is over.

With a huge map, hundreds of cars, and countless racetrack possibilities, Forza Horizon 2 is a stellar open world racing game. Rating: 9 out of 10


Disclosures: This game was obtained via publisher and reviewed on the XBONE . Approximately 20 hours of play was devoted to single-player modes (completed 1 time) and 5 hours of play in multiplayer modes.

Parents: According to the ESRB, this game contains mild lyrics, mild suggestive themes, mild violence. You should be fine with your kids playing this game. It's safe car driving with absolutely no pedestrians to hit. That being said, is does encourage reckless driving pretty intensely, so if your kids are learning to drive soon, be sure that they get that it's just a fantasy. Real cars cost money to repair.

Deaf & Hard of Hearing: You will be fine with this one. There are absolutely no audio cues that will effect your gameplay in the least.

Forza Horizon 2 is great, but one thing I wish it shared with the original is the diversity of the game world. Colorado had areas with mountains, desert, plains, a little suburban and so on. Horizon 2’s game world looks good, but lacks different types of environments.