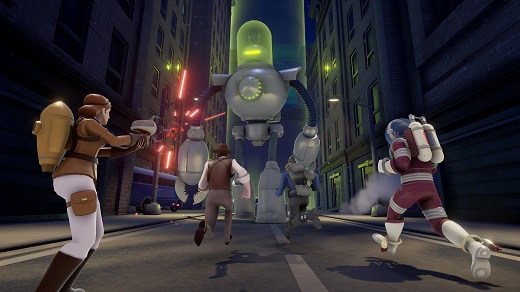 WTF Seeing "You will respawn at the end of the round" in a one-round map. Thanks.

The Earth Defense Force series has done well updating this trope with their clunky, towering death machines, and I've loved every minute of it. So, it's completely understandable that a developer would try to drop '50s robots into a tower defense game—it's an accessible genre in constant need of new settings, and ‘50s robots seems like be a great one to try. The attempt doesn't guarantee success, however, and Fortified doesn't get much right beyond its monster design.

Fortified asks between 1-4 players to battle an onslaught of alien metal, using a wide variety of weapon emplacements and recruitable soldiers while directly controlling one (of four) classes. These forces defend anti-UFO missiles, trying to buy enough time so that the Army can shoot down the invaders' ships in orbit.

This may not seem like much of a problem—after all, plenty of other TD games have players defending the same magic crystal or data core for hours on end. The problem is that Fortified doesn't just have the same goal for every mission—they all take place on essentially the same map.

Sure, the layouts are different, but it's unmistakably the exact same buildings providing the maze walls. Every level is set deep inside the most generic city imaginable—red brick walls, light grey sidewalks, dark grey roads. Some missions are during the day and some are at night (and in the back six of the game's 12 missions, it's snowing!) but it all feels exactly the same. This isn't a long game—each of the levels takes five or ten minutes to play—but I was sick of seeing the same bland, lifeless visuals long before it was over.

The core gameplay doesn't fare much better. It's surprisingly difficult to play solo—all of the weapon emplacements are woefully underpowered, as the developers clearly expected they would only ever be used in tandem with a human player. Of course, most of the maps require 2-4 avenues of attack be covered simultaneously, leaving single players high and dry. Their only option is to spend all of their money on soldiers who can be stationed around the map, but even then it's a stopgap solution at best. Playing solo is essentially impossible past the lowest difficulty setting.

I did manage to get enough multiplayer matches going to see the whole game, but I was left wholly underwhelmed by the sterile, weightless feel of the combat. The robots look good enough when they're walking or hovering around, but they fail to react in interesting or believable ways to being attacked. There are a few emplacements and guns that can toss them around the map, but fighting these alien robots boils down to continuously firing at them as their health bars are slowly whittled away, until they finally keel over and disintegrate into nothingness. Where are the sparks, or the explosions? Where are the bits of crushed droid littering the map? Where are all of the things that make fighting robots in video games so thrilling? This kind of bland death animation may work fine in bird's-eye-view Tower Defense, but when I'm five feet away from a robot and looking it straight in the optics, I want to see something thrilling.

With a dull location, uninteresting combat and repetitive missions, Fortified only has its ‘50s robots to recommend it. While I can't deny that devotees of the period will no doubt find something to like in this menagerie of tin monsters, anyone looking for a solid Tower Defense/Shooter hybrid will have to look elsewhere. It won't be hard to do better than this. Rating: 3.5 out of 10


Disclosures: This game was obtained via publisher and reviewed on the Xbox One. Approximately 6 hours of play was devoted to single-player modes (completed 1 time) and 4 hours of play in multiplayer modes.

Parents: According to the ESRB, this game contains violence. Don't worry about this in the least. Yes, it's possible that the robots might be a little scary to more impressionable youths, but by and large this is as harmless as sci-fi action and violence comes. Robots shoot lasers, then get blown up by guns. No blood, no gore. Honestly, I'm surprised this is even a T. It borders on E 10+ territory.

Deaf & Hard of Hearing: You won't have any trouble here. There are no important audio cues to keep you from enjoying the game.

Remappable Controls: The game allows players to invert the X/Y axes of the aiming stick, but offers no other customizable controls.

Colorblind Modes: There are not colorblind modes available in the options. The only color-coded parts of the game are the upgrades that each weapon and structure has—but their effects are all explained clearly in text when players are selecting them.