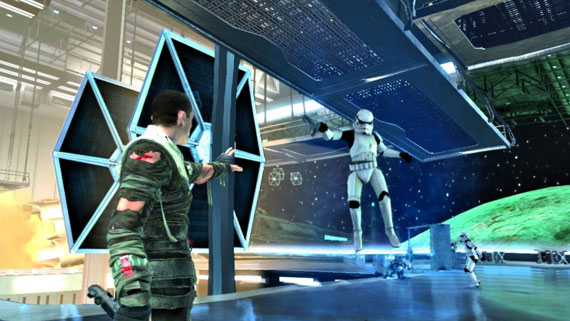 First off, I was ecstatic to see that the central gameplay mechanic was a complete rip-off of Psi Ops’ telekinesis. I was a huge fan of Psi Ops when it came out, and was saddened when middling sales and mediocre reviews led to it not going on to revolutionize videogaming. Sure, we would have all gotten sick of throwing giant objects around, crushing all the puny humans in our path—actually, come to think of it, we probably wouldn’t have. Why didn’t that game sell more copies? How on earth was Destroy All Humans the only title lining up to rip it off?

Well, now there’s a second* game out there riding on Psi Ops’ coattails, and it delivers the ‘evil god’ action just as fantastically well as its predecessors. Force Unleashed's main character can toss any of the game’s dozens of random metal crates around crushing Stormtroopers and Rebel scum alike. He even one-ups Psi Ops’ main character in his most cruel technique—while Nick Scryer could dangle foes in the air and then riddle them with assault rifle ammunition, Force Unleashed as-yet-unnamed character can dangle them in the air and throw a lightsaber into the center of their chests. It’s an improvement of degrees, but an improvement nonetheless. Being able to grab a TIE fighter from its landing hook and then slam it down to the hangar floor is a cool enough feat that it totally makes up for the fact that the slightly wonky targeting makes grabbing that TIE fighter quite a chore most of the time. Although, to be fair, I’m sure the targeting issues will be worked out before the game is released—a simple switch of the reticule from blue to gray when the selected item is out of range would go a long way. 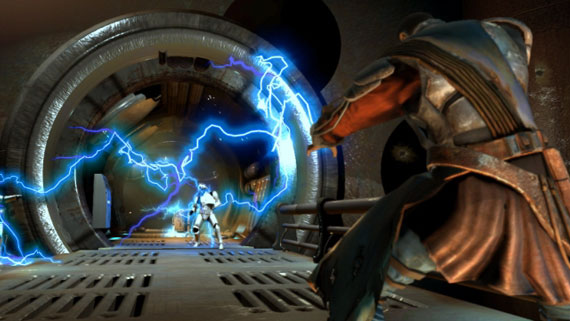 That’s the end of the game’s positives, though, because, while it largely succeeds as an action game, Force Unleashed stumbles badly in its presentation of the Star Wars universe. The first mistake? The Lightsaber completely sucks. It seems like job one when making a Star Wars game would be to make sure that the lightsabers are top-notch, but apparently that was lost on the developers over at Lucasarts, since their lightsabers are woefully underpowered. Here’s a tip: If you have to hit someone more than once with a lightsaber, it’s not a G-D lightsaber! This isn’t Devil May Cry—I shouldn’t have to hack away at my opponents like I’m chopping down a tree with a butterknife. Even trying it at the easiest difficulty I was forced to hit enemies 2-3 times to kill them. What’s the point of being a Jedi if I can’t cut a brutal swath through my enemies? Even worse, there are enemies with clubs that can actually block a lightsaber! What kind of world are we living in where a lightsaber can be blocked by anything other than a lightsaber? If they’re that useless, why not just carry a gun? Would having to hit enemies a single time make the game a little easier? Sure, but just make the enemies shoot a little faster and more accurately. There, balance is restored.

While I’m on the subject of the lightsabers, here’s thing that really shocked me. I was unable to cut my enemies to pieces. No severed heads, no flying limbs, no sundered torsos. Robots can be cut in half just fine, but humans? Not so much. Again, what’s the point of wielding an impossibly “sharp”, superheated length of contained light energy if I can’t use it to split a man from knave to chops? It’s possible that this oversight was some kind of a ratings issue, but if that’s the case, they should have looked to the example of Bionic Commando Rearmed. Here’s a game with absolutely no realistic violence of any kind. No blood or torture or excessive nudity, but it still got an M rating. Why? Because right at the end, in an updating of a notorious moment from the original NES game, there’s a cutscene that can only be described as unbelievably gory. Could it have been cut seamlessly, and as a result, dropped the rating down to a T? Sure, but the developers knew what the fans wanted, and they gave it to them. There’s not a film in the original Star Wars trilogy where a hand or arm isn’t severed. In the new trilogy an older, more unpleasant George Lucas moved on to decapitations and split torsos. Bionic Commando has a tiny fraction of Star Wars’ fanbase, yet the developers understood the kind of things that were important to the fans, and made sure to include them. Besides which, it’s not like an M rating would have hurt sales. It’s a Star Wars game. Parents are going to buy it for their children regardless of any content warnings. 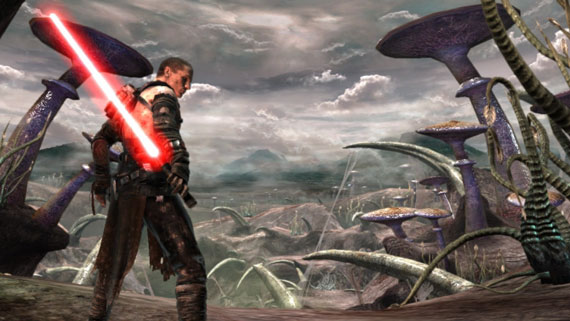 And this is a totally aesthetic thing, but why does he hold his lightsaber like such a jackass? This is the swordfighting equivalent of turning your gun sideways. It doesn’t help, it just makes you look like you don’t know what you’re doing**. It’s like he doesn’t understand that fifty percent of what the lightsaber is there for is to deflect blaster fire. Not easy to do when the sword is behind your back.

If a complete botching of the lightsabers wasn’t bad enough, the game also features a weird decision drawn from what I like to call the “Todd MacFarlane School of Design”***, in which developers take something that was perfectly good to start with and, in trying to make it just a little bit ‘cooler’ or ‘edgier’, totally ruin the effect. The Force Push, once the coolest move in the Jedi arsenal, now has a visual to go along with it. Instead of the main character just gesturing and watching enemies cartwheel into the distance, now the move is accompanied by waves of blue energy cascading forwards along the path of destruction. Couldn’t they see that this robs the move of its effectiveness? What makes the Force Push so amazing is that it’s the most awesomely casual thing a character can do. Just a simple flick of the wrist and destruction ensues, with no visible cause. It’s the ultimate example of just how mysterious and powerful the Jedi are.

When the game Bullet Witch has a better representation of the Force Push than a Star Wars game, you know something’s profoundly wrong. 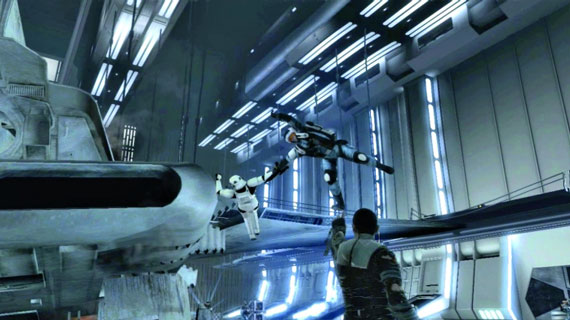 All of this rampant complaining shouldn’t suggest that I have no interest in playing the game. I love Psi Ops so much that if fifty games ripped it off as effectively as Force Unleashed does, then that would be fifty more games I owned. That being said, the Jedi thing really shouldn’t be that hard to get right, and if the developers have made mistakes this fundamental, it makes me deeply concerned about the rest of the Star Wars content in the game.

* (Are there more than two? If there are, please tell me so I can go and buy them immediately.)

** (Yes, I know ninja hold their swords like that, but they have a practical reason—putting the short blade of a ninja sword behind their arm keeps it from reflecting light, allowing them to approach enemies unseen in dim surroundings. Also, the back of Ninja swords are blunt. This guy constantly looks like he’s going to slice the back of his own head off.)

***(As first theorized in my review of Evil Prophecy)

The character’s name is Starkiller

Daniel, I always go to your reviews because I think they kick butt. I respectfully disagree with you in regard to this demo, however. I thought it was really good and it had me wanting more. The telekenesis may have been a rip off of psi ops, but it really works. The way you blow the doors open is pretty cool since the physics depend on where you hit them and how many times. The throwing of the cargo is cool, and the saber fighting was fun. I agree that it could be more of a bad ass weapon, but… Read more »

Well, I have to admit that game got me hooked up from the videos… Now if the demo is so unconvincing… Still, suppose it turns out a good to great game that’s gonna be worth having… would they maybe consider it for PC?

Seriously though, without having tried the demo, it sounded really interresting > Darth’s secret apprentice, able to grasp objects and people > using the force freely… It had me convinced.

Oh well. We shall see.

Nope. Not coming to pc. And by the looks of it, we’re not missing out on anything.

I thought the demo was boring. The combat just wasn’t satisfying enough.

@ Anonymous, when you say:
“After playing Jedi Knight and Academy I was thinking this would suffice since it wasn’t coming on PC, but holy moly it’s pretty dissapointing. Feels just right on the console. I agree with everything you said and then some. The jump just feels way over done, too quick, the whole game is.”

Sorry, I’m confused, are you sad because it’s not coming out on the PC or did I get it wrong?

Also, again, sorry for my rant, but suddenly I’m striken by doubt, is it or is it not intended for PC?

After playing Jedi Knight and Academy I was thinking this would suffice since it wasn’t coming on PC, but holy moly it’s pretty dissapointing. Feels just right on the console. I agree with everything you said and then some. The jump just feels way over done, too quick, the whole game is. Also, on the topic of hacking with the lightsaber, what the heck is the stop and go like out of street fighter? What is that? Enemy AI is completely bonked, they will just stand around picking their noses waiting to be gripped. So sad. Not going to get… Read more »

What’s the point of the weilding the baddest weapon in the Galaxy far far away if you have to use it like a Machete? I sincerly hope this is the only real problem with this game.

Hello hello, how are you? As I haven’t DLed the demo and therefore haven’t tested it, I can’t provide any insight. However, as much as I’ve read with much interrest your preview, more so because I think this game is very promising to me, at least after seeing all the videos over at IGN, I really like Star Wars, and though I haven’t actually played any SW games, this game looks like it’s gonna be amazing. At least, it should, well, I hope it will! But, not that I haven’t read your preview, the only thing really that bothers me… Read more »