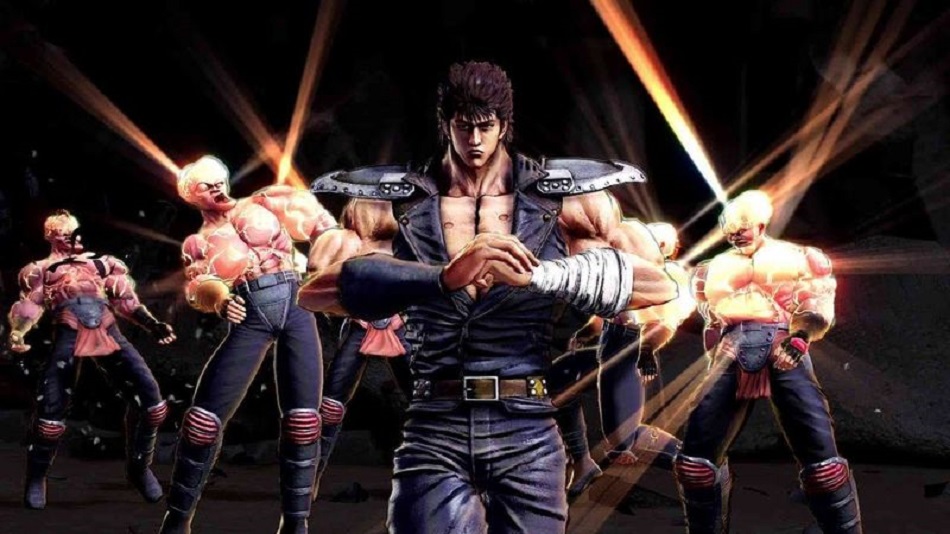 HIGH The perfect use of slight controller vibration during the Thouzer fight.

LOW The sheer amount of grinding required for high-level parts.

I’m not sure there could possibly be a better developer to create a Fist of the North Star game than Yakuza Studio. The devs were already famous for making a dramatic series about struggling to be an honorable person in a completely corrupt world — moving that same premise to a Mad Max-themed post-apocalyptic hellscape doesn’t seem like much of a stretch. The accompanying gameplay of 1-on-20 brawler battles with occasional boss fights is also well within their wheelhouse. If they didn’t manage to knock this one out of the park, it would have been quite a shock.

Of course, they didn’t just knock it out of the park — they smashed it into the stratosphere like a punk motorcyclist hit by an I-beam swung by the strongest man on earth. Which, naturally, is one of the minigames featured in FotNS. And as a bonus, they even created a skin that makes the protagonist look just like Kiryu…

From the jumping-off point, the developers make it clear they’re going to make this adaptation their own, rather than just retelling the classic Buronson and Hara manga from 1983. I won’t spoil story details, but the plot is going to be significantly different than what series fans might expect. While the manga’s Kenshiro was a man with nothing to live for but the knowledge that justice must be served, FotNS’ version has been transformed into something far closer to Yakuza’s Kazuma Kiryu — a man who’s out of step with the world, struggling to relate to the regular people around him, and willing to risk it all to do the right thing. 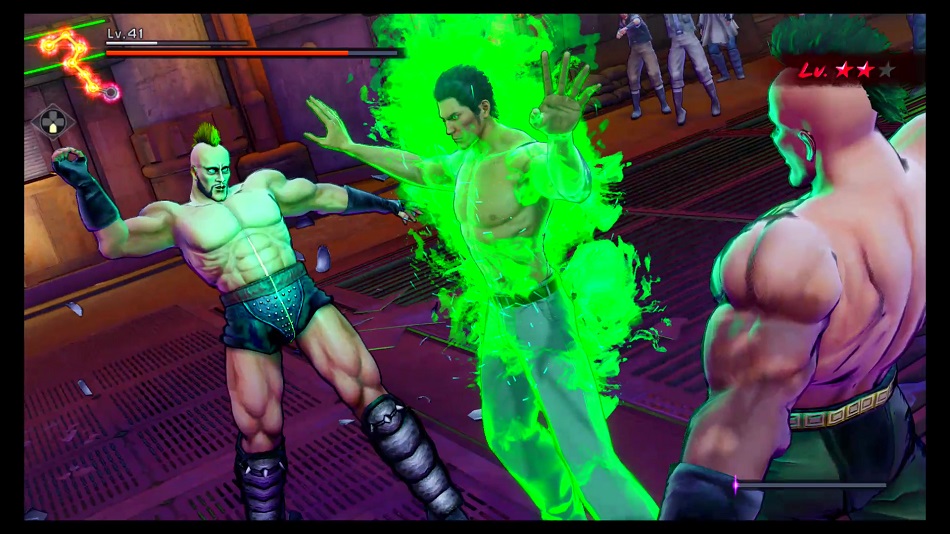 They accomplish this new approach to the material by massively altering the setting. To put it mildly, the world of Fist of the North Star was always thinly-sketched. There was a nuclear war, Japan was rendered a suspiciously non-radioactive desert, and feudalism returned. The core was seeing legendary martial artists battling in a world of stick figures.

In contrast, the FotNS developers have gone out of their way to humanize the game’s world. Centering on a single town completely changes the story’s focus, and instead of a wandering ronin killing some local thugs and continuing on his way, Ken is transformed into a member of a community — a man rising from being a prisoner to a pillar of a society as he touches the lives of those around him. There are also themes about exactly how a society should function – the town of Lost Paradise is essentially an Eden, as it’s one of the few bastions left offering fresh water and electricity. At the game’s outset its citizens hide behind its walls, watching with regretful eyes as would-be refugees starve just meters away. Obviously this cannot stand, and there’s a man who makes heads explode ready to weigh in.

Speaking of exploding heads, the game is full of them. Almost pornographically violent, FotNS takes the basic Yakuza fighting system and adds hypergore. Kenshiro is the master of a martial arts style that uses acupressure to manipulate the human body — on one hand, it can cure almost any illness. On the other, it can cause the human head to explode like an overripe melon blasted by a shotgun, and Ken does a lot more of the latter than he does the former. Even during the doctor-themed minigame he takes time out from fixing bodies to murder some goons. 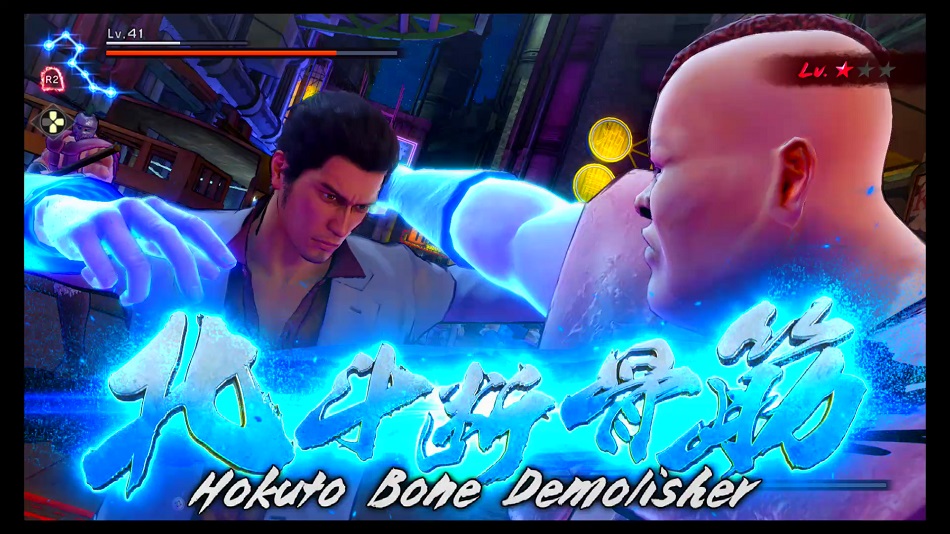 The Yakuza fighting system was already exceptionally well-balanced, but the improvements here are simply stunning. Kenshiro is incredibly strong, but instead of shying away from that and finding a plot device to cripple him in some way, the developers have leaned into it. The player starts out OP, and just gets stronger from there. To unleash power attacks, all the player has to do is hit an enemy enough times to weaken their resolve, then a single button press can put them into ‘shock’ state where they’re vulnerable to instant-kill attacks. Bosses are still a challenge, of course, but the game does an exquisite job of making it feel like Ken is a terrifying monster in combat.

Fist of the North Star does falter in one respect – the wasteland buggy sections. Outside the city walls is a huge open area, and a few chapters into the game, the player earns a vehicle to traverse it. There are special items to find, random encounters to get into, and settlements with their own substories to complete. The problem is one of size — the wasteland is just too big, with too little to do within it. It takes forever to drive anywhere with the starting buggy, and the only way to make it faster is to drive around picking up wasteland junk for hours on end. There are interesting stories out there in the sand and the racing minigame can be solid if players are willing to invest the hours necessary to get their buggy into tip-top shape, but I can’t see anyone but the most die-hard devoting the necessary time.

I said that this is a perfect match of developer and IP, and that’s not an exaggeration. The Yakuza Studio has not only produced the best Fist of the North Star game ever, but also one of their best overall. This is a setting more raw and  gloriously over-the-top than their usual, but they never tamp down the humanistic streak that defines the entire series. Wipe away the blood and guts, and underneath is a beautiful story about the importance of working together, and how selflessness is the ultimate virtue. Rating: 8.5 out of 10

Disclosures: This game is developed by Hokuto Ga Gotoku Studio and published by SEGA. It is currently available on PS4. This copy of the game was obtained via publisher and reviewed on the PS4 Pro. Approximately 60 hours of play were devoted to the single-player mode, and the game was completed. There are no multiplayer modes.

Parents: According to the ESRB, this game is rated M and contains Blood and Gore, Intense Violence, Strong Language, and Suggestive Themes. Keep the kids so far from this one. There’s no nudity or drugs, but there’s constant swearing, intensely brutal violence, and quite a bit of sexual innuendo in conversation. Also, I’m not sure how they missed the ‘alcohol’ warning. Ken works as a bartender in the game, and numerous characters become drunk as part of that plotline.

Deaf & Hard of Hearing Gamers: I played most of the game with the sound off, and encountered no difficulties. The game has both English and Japanese audio tracks, and all dialogue is subtitled. Those subtitles cannot be resized. This game is fully accessible. 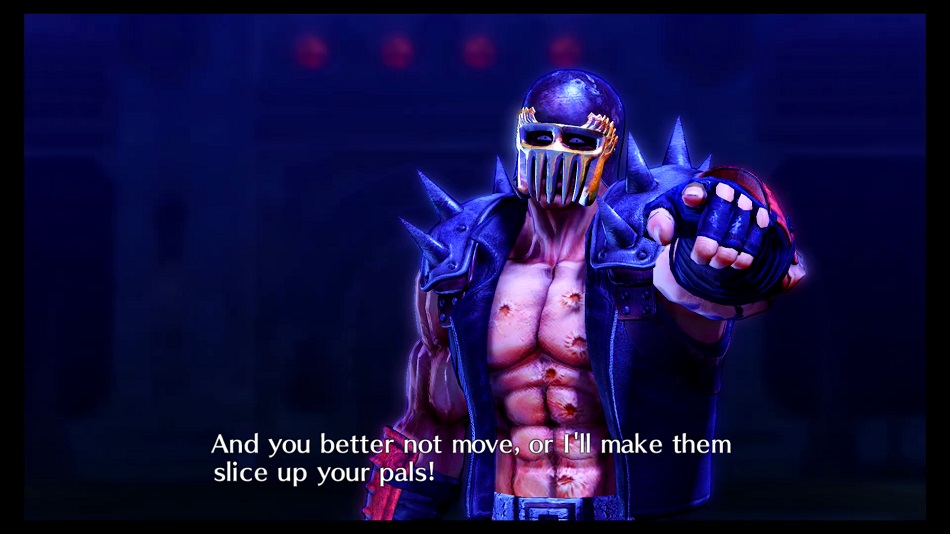 Remappable Controls: No, this game’s controls are not remappable. There’s no diagram for the controls, but it uses a fairly traditional 3D melee control system with the left stick controlling movement, right stick handling camera positioning, and face buttons employed to attack, block, and perform special moves.