A Sword Is Your Best Friend 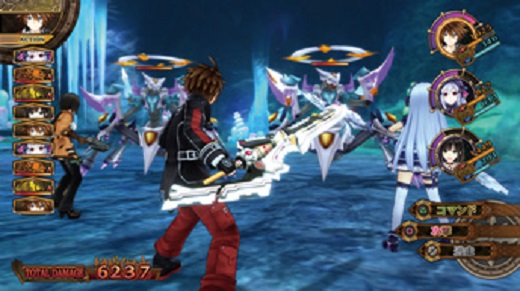 HIGH Literally any of the adorable monster sidekicks. They're all great.

LOW Killing twenty Earth Golems in a row to farm the gems I need.

WTF Wait, is the game almost over? It's only been 20 hours… Oh, I see what's about to happen!

I'm not in any position to ask favors from Compile Heart, the developers of Fairy Fencer F. I've played enough of their games to know what I'm getting into when I boot up the PS3.

There will be girls in fetish costumes. Many of the respawning field enemies will be drawn from a large pool of recycled 3D models. At some point, two female characters will get into an argument about breast size, probably during a bath scene.

These are known quantities going into a Compile Heart game, and only a fool would expect different, but what I wanted on top of all that other stuff—what I hope for every time I start one of their games—is a story and setting worth spending 40 hours in.

This time, they delivered.

Set in the standard 'fantasy world with ancient high-tech ruins', FFF takes a cliched premise (Ancient Gods and Demons are Sealed Away, competing forces want to release them) and twists it into a nearly unrecognizable shape by making quest items into characters with their own stories and opinions about the fate of the world.

Players start out as Fang, a starving young adventurer who becomes a 'Fencer' by pulling out a 'Fury' from a stone, releasing the 'Fairy' living inside the magic weapon. The alliteration can get a little confusing at times, but the gist is that every hero receives, along with the only weapon they'll use for the rest of their lives, a magical sidekick. It's not unlike the premise of The Golden Compass, if people's Daemons could have been men in suits, or mouse-ladies, or giant robots. In this world, it seems, Fairies can be any Japanese genre archetype at all!

To its credit, the game wastes absolutely no time on backstory or exposition. Players are expected to accept the outlandish premises of FFF's world and just blaze ahead. It's a winning strategy, as I found myself excited to watch the world map open and add new locations, knowing full well that each new area would introduce more bizarre characters and strange plot twists.

Fairy Fencer's world is relatively contained—there's a hub town for shopping and plot, then a series of dungeons to visit—but the developers manage to take the story in such unusual directions that it's impossible not to be impressed by their audacity and skill. Is it fundamentally another story about a scrappy group of underdogs trying to stop the resurrection of an evil God? Absolutely. But the places the story goes on its way to the inevitable final conflict are fascinating enough to justify the trip. 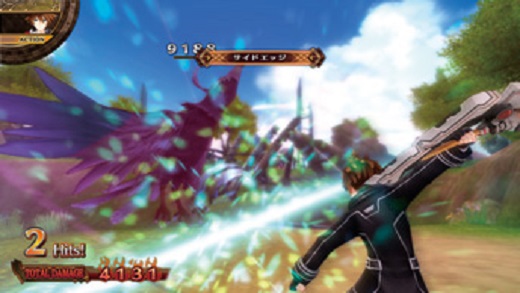 FFF's combat and world-shaping mechanic are also high-caliber. Players make a three-person combat team for turn-based combat which takes place in the same field where enemies were encountered. There's nothing new in the combat, but it's well-balanced, with each character having enough unique skills that there's always a situation they can be useful in.

World-shaping is FFF's feature for making dungeon-crawling more interesting and rewarding. Over the course of the game, players will come across plenty of extra furies that have special characteristics—bonus gold, changing monster types, doubling all damage—and by stabbing those swords into the ground near a dungeon, they apply those stats to the area ahead, making it easier or harder depending on their tastes. Anyone interested in seeing something other than the worst possible ending will be heading back to the same dungeons numerous times, and this mechanic does a great job of keeping that experience fresh.

The game only falters when it comes to its character advancement and sidequests. Rather than having players constantly buying or crafting weapons, all the game's heroes stick to their own personal Fury, which can be upgraded with Weapon Points earned alongside Experience and Gold after fights. It starts at 1 point per enemy, but eventually starts scaling upwards.

At first it seems like a good system: fight to earn points to boost stats and unlock attack combos and spells, and it largely works. However, there's a problem—when new characters are added to the party, they'll already be at a level equivalent to the main characters, but their Furies won't be leveled up at all. They'll have a few points to spend, but the amounts aren't comparable to how many points players have already obtained for Fang's Fury, and with underpowered weapons, newer characters can prove to be major liabilities in combat.

FFF's sidequests are also problematic because they're based around a job board: players agree to find a certain number of items or kill a certain number of enemies in exchange for a reward. Not bad in theory, except that the game doesn't do a good job of letting players know where those enemies and items can be found.

There's an enemy guide which adds a listing every time an enemy is killed, but that listing doesn't mention where the enemy was found, so unless players are taking notes, they'd better hope they can remember exactly where they ran into King Mecha Penguin. Item hunting is worse, because many of the mid-to-high level quests require the player deliver items that have to be stolen from enemies. This wouldn't be such a chore if it wasn't for the fact that only one character can perform steal attacks, and they have an extremely low success rate.

Those problems can't overshadow all of Fairy Fencer F's great qualities, though. A solid story and engaging characters go a long way towards justifying a JRPG's existence, and the world of FFF is quite charming. FFF is an interesting new series and I hope it continues—it seems like there are many more stories to tell about a world full of brave swordsmen and their talking kitten sidekicks. Rating: 8 out of 10

Disclosures: This game was obtained via publisher and reviewed on the PS3. Approximately 60 hours of play was devoted to single-player modes (completed 2 times).

Parents: According to the ESRB, this game contains blood, mild language, partial nudity, suggestive themes, violence. Expect the normal amount of JRPG salaciousness. There are scantily-clad ladies everywhere, a bath scene, innuendo-laden dialogue, and alternate bathing suit costumes for the main characters. That's about it for objectionable content, though. The violence is almost completely bloodless, and there's no drinking or deeply troubling messages.

Deaf & Hard of Hearing: It's a JRPG—no vital audio cues, and everything is written clearly onscreen.