The Keyboard is Mightier Than… 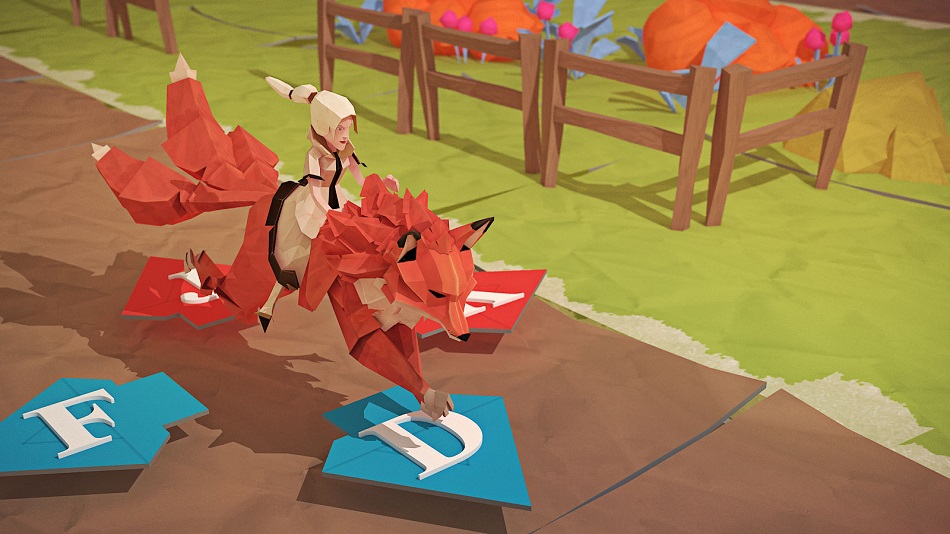 LOW Getting killed because the game thinks I want to open a chest a hundred meters away.

WTF Wait, so this isn’t the story of me writing the story? What?

I will never understand why typing combat games aren’t a bigger genre. Other than House of the Dead putting out the occasional game, it’s essentially a dead genre. But why? Typing tutorials are still necessary, it’s a good skill to have, and watching enemies catch bullets as I strike keys adds a certain thrill to typing out the word ‘mordantly’. Now Epistory can be added to the short list of typing action games – it even adds a little RPG-lite gameplay into the mix.

As Epistory begins, players are whisked into a isometric papercraft world and placed in control of a young girl riding a fox. She’s on an adventure through a world constantly being built by her typing. As the player explores the forest hub world, they’ll first encounter dead bits of grass or falling rotten trees – they have to switch into typing mode and type out the words that appear, then suddenly flowerbeds will sprout and tall evergreens will replace the fallen logs.

While most of the typing is centered around combat or puzzle-solving, my first in-game experiences were with bringing nature back to a blasted land and feeling like I was making a creative contribution to the world. This is exactly what one should be getting out of a typing game, I think.

Make no mistake, though, there is a lot of combat in Epistory. The world is loaded with disgusting insects that can kill the fox/girl team in a single bite, so players will constantly find themselves dropping in and out of typing mode to attack foes by spelling out words that appear over their heads. These words can range from a single letter for mosquitoes, all the way up to 32-character behemoths hovering over the heads of bosses. 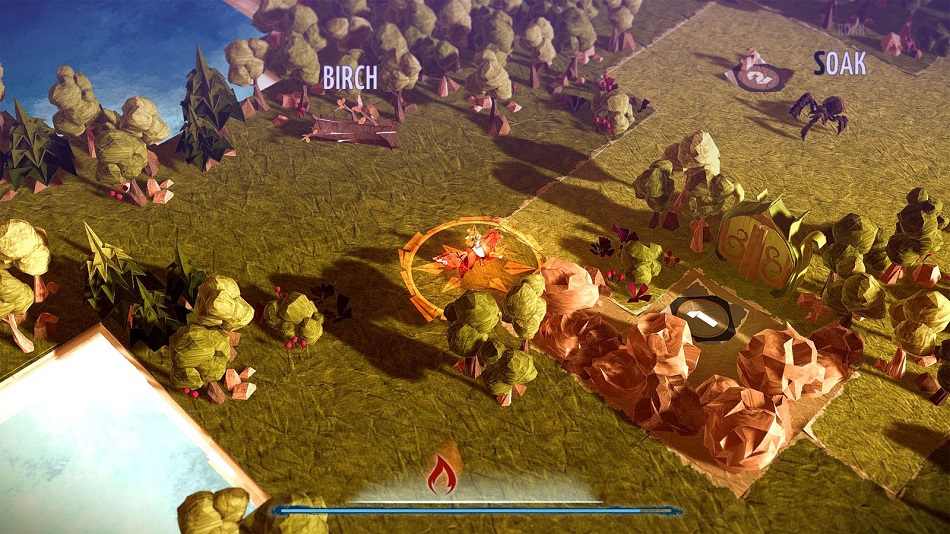 While monsters occasionally show up in the wild, they’re largely relegated to combat arenas where the player steps on a circle and the camera pulls back to let them get a look at the hordes of words swarming in from all angles. This kind of combat can get overwhelming fast, but the game does a good job of offering a wide variety of powers to make things a little easier.

Once they’ve been unlocked, the player can type fire, ice, wind, or spark to switch to different elements, with each one having a distinct effect on foes. Ice and wind manage enemy movement to buy the player time, fire automatically destroys the next word coming up over a monster’s back and frees the player to move on to another foe, and spark chains to all nearby enemies, doing huge amounts of damage with a single word. While manually switching between powers by typing out their names may seem daunting at first, it quickly becomes second nature, turning combat into a tense, rewarding experience. After all, players aren’t just squashing bugs – they’re practicing a valuable professional skill.

Epistory‘s adventure and puzzle sections are less satisfying than the combat, but it’s not a failure of design, so much as it is one of camera placement. The world is grid-based, but the isometric camera means that pushing up moves the fox diagonally within the world. Most of the puzzles revolve around running across floor panels in a certain sequence, or lining up perfectly angled shots with gusts of wind, but both activities are transformed into chores by inexact character movement. There aren’t any time limits, so all of these puzzles can be muddled through — it’s just too bad they’re not as smoothly designed as the combat is.

There is one problem with the combat, though – it’s not a major flaw, but it’s the kind of easy-to-overlook error that can prove incredibly frustrating at just the wrong moment. When in combat arenas, the game automatically switches over to typing mode, since the player has to focus on identifying and dealing with threats. Unfortunately, Epistory doesn’t turn off environmental tasks – chests to open, debris to destroy, and the like – and some of those words can be difficult to see deep in the background. When I’m focused on burning an armoured worm slinking towards me, the last thing I need is for the text parser to get hung up thinking I’m trying to open a chest a mile away. Since the player can only type at one object/foe at a time, it’s possible to get trapped halfway through the wrong word while a threat draws close.

Minor quibbles aside, Epistory is a solid typing adventure. The story mode is around five hours long, and a leaderboard offers plenty of opportunities to test typing skills against the rest of the world. While the plot never builds to the kind of interesting levels that the introduction suggests (in fact, an end-game twist is something of a headscratcher) the gameplay is so well-made that it’s hard to fault the rest.Rating: 7.5 out of 10

Disclosures: This game is developed by Fishing Cactus and published by Plug In Digital. It is currently available on PC. This copy of the game was obtained via publisher and reviewed on the PC. Approximately 6 hours of play were devoted to the single-player mode, and the game was completed. There are no multiplayer modes.

Parents: This game was not rated by the ESRB, but it contains fantasy violence. There’s nothing scary or excessively violent here. No swearing or questionable content, either – some voiceover and text onscreen makes reference to slightly mature themes, but really, this game is suitable for anyone of an age where they’re learning to type.

Deaf & Hard of Hearing Gamers: There are no audio cues of note. It’s fully accessible.

Remappable Controls: No, this game’s controls are not remappable. Of course they aren’t. It’s about typing on a keyboard.

Note that it’s compatible with various keyboards layouts, including Dvorak.