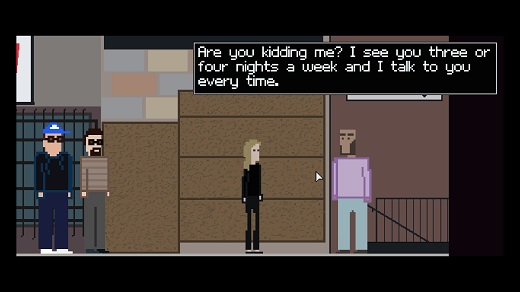 LOW The text to click on things is white, like the items and backgrounds. How did this get through testing?

WTF Your burden? Please tell me that wasn't a GWBW reference.

After reviewing Gods Will Be Watching, I thought I'd never have to go back to that unbelievably specific kind of game again. Pixel-based, pretentious, needlessly obtuse, recursive to the point of self-negation… that's a lot of terrible boxes to for one game to check off, and I was both disheartened and surprised to find myself noticing all of them as I played through Epanalepsis. The game may be only an hour long, but it manages to pack a whole lot of annoyance into that short timeframe.

A point-and-click adventure game, Epanalepsisis is quick to point out on its Steam page that it's 'narrative-focused', which is a polite way of saying 'offers no gameplay of note'.

The story takes place over three time periods, each with just a handful of rooms to explore. Only two have things that can remotely be considered 'puzzles' to solve, and there are only three decisions that need to be made, although they don't have much of an impact on anything as far as I could see.

The 'gameplay' revolves around walking left or right along a 2D plane, and clicking on things to hear the character talk about them. This proves to be the game's one source of mild entertainment, as the developer has actually done a decent job of writing the character's thoughts.

The first segment features the best-developed protagonist, Rachel. She's a twentysomething slacker in the year 1993 who's broke, depressed, drinks too much, and full of loathing. She's not a blast to be around, obviously, but her inner monologue feels true, and the decision she has to make at the end of her chapter—chase self-pity until it destroys her or try to get on with her life—is the only one in the game that actually has relatable stakes.

Anthony, the star of the second vignette, is a broad hipster stereotype, and his comments on the world around him, while mildly amusing, don't do anything to build up the overall narrative. When his story ends abruptly, without ever offering the chance to make any kind of a story-altering choice, I had a hard time caring one way or the other.

In the final section the player controls a robot which has been hijacked by anarchists in the dystopian future of 2033. In its own way, the robot is the funniest character in the game—the world around it is full of tiny infractions and petty crimes, suggesting a totalitarian future just 18 years off, but the fact that it's no longer working for the government leaves it unable to tattle on all of the misbehavior it encounters. It's a good bit of writing, but once again, the near-complete lack of story makes the whole trip into the future feel pointless.

At the end of it, a third key decision point is reached, but the game has done such an incredibly poor job of explaining the situation and stakes of that decision that even after I'd made it I still had no idea what was going on.

I played through Epanalepsis twice, making different choices at the game's binary decision points and found no meaningful changes to the story based on my involvement. There are tiny hints buried within the frustration that connections exist between the three vignettes, but there simply isn't enough story to latch onto, even if one wanted to figure out the mystery. There are many potentially-interesting stories to be told about regular people whose lives are briefly interrupted when they brush up against things beyond their understanding. Epanalepsisis is not one of them. Rating: 2.5 out of 10


Disclosures: This game was obtained via publisher and reviewed on the PC. Approximately 2 hours of play was devoted to single-player modes (completed 2 times).

Parents: This game was not reviewed by the ESRB, but it contains violence, blood and gore, suggestive themes, alcohol use, tobacco use, drug use. I can't imagine your kids wanting to play this game, but if for some reasons pretentious ruminations on the futility of affecting fate appeal to them, the game really isn't all that harmful. Yes, the content warnings are a little scary, but in the actual gameplay those mostly amount to passing references.

Deaf & Hard of Hearing: Graphic adventure, no audio cues, you'll be mostly fine. I say mostly because there's one drawback—you can press a button to save the game at any time, but there's no onscreen confirmation that the game has been saved, just a quiet chime. This is a strange choice. One of many.