The Legend of Elliot 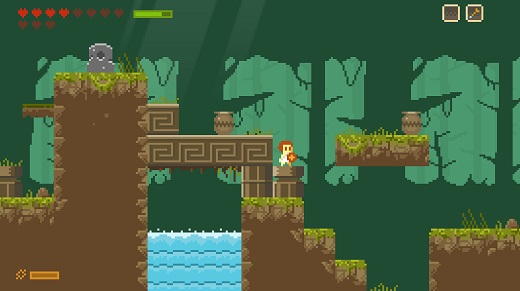 LOW When it had been been five hours since I beat a dungeon, and I still had no idea where I was going.

WTF If there's going to be a level cap, warn me about that before I spend all my skill points in stupid ways, huh?

If Volgarr the Viking's game-length tribute to Rastan surprised me, then Elliot Quest's attempt to redeem Zelda 2: The Adventure of Link leaves me absolutely baffled.

The overworld exploration, hidden temples, spell system, and RPG-lite leveling mechanic of Elliott Quest are all cribbed directly from the second game in the Zelda series, released in 1988. That's not to say that it doesn't bring current ideas to the table—there's a branching storyline, secret bosses, and even a truly confusing morality system. These two halves of the experience contribute to the central conflict in Elliot Quest's design—the game can never figure out exactly how retro it wants to be.

Set on a mysterious island, the game puts players in control of Elliot. Armed with his trusty bow, he must discover the source of the evil power that threatens to destroy his homeland. Exploring temples, fighting bosses, collecting crystals—this is all well-trod ground, and Elliot Quest delivers most of it exceptionally well.

This is especially true in the dungeon design—the developers are adept at creating environments that seem frustrating at first, then simple to traverse once players have found that area's upgrade. The boss fights are similarly satisfying, with each one giving players a chance to try out their new skills and powers. They're final exams teaching how to master the game as player progresses.

Unfortunately, this spirit of instructional gameplay doesn't go far enough outside the temples, and the game gets into trouble by massively under-explaining things to the player. While it's true that Zelda 2 also failed in this respect, Elliot Quest's refusal to help is a more egregious failure, since nearly 30 years later, its developers should be well aware of that game's shortcomings and shouldn't have re-created them.

Take, for example, the game's overworld map. Players are free to guide Elliot around it, looking for areas to explore. Eventually, players will stumble into a location that can be entered, and a bubble appears over Elliot's head to show they've found something important. Some of these areas are easy enough to identify, and the icons tip players to locations of interest. Unfortunately, these notifications are inconsistent, and about half the time players are expected to just go wandering around until they happen upon a location whose visual blandness hides a secret area.

This brings me to the game's bigger problem—its semi-open world is unstructured to the point of absurdity.

Just a few hours in, the player will have discovered a dozen different locations that are initially impassable, but they can be explored later once certain perks have been obtained. It's standard enough for the Metroidvania genre, but since the game offers no way to keep track of these locations, players will find themselves suddenly granted a new ability and then be left scratching their heads, wondering which exact screen of the game's 10 optional labyrinths they're supposed to use it in. I played Elliot Quest for 30 hours, and I would say nearly half of that was spent traveling around the overworld struggling to remember where I was supposed to go next.

While it's true that I used to play the original Zelda games with pen and paper to take the copious notes required to beat them, Elliot Quest is far more complex and hostile to casual players than Zelda ever was. Would it really have that been that difficult to put a symbol over discovered areas in the overworld, letting players find their way back to areas already explored? Once they get a new power, why not change the color of those markers so players know the general area they should use it in? I'm not asking for a walkthrough, it just seems like the developers are actively opposed to the idea of the player making it all the way to the end of their adventure.

Where Volgarr took the best parts of a classic arcade game and added just enough modern depth to create a truly satisfying experience, Elliot Quest takes the most frustrating and time-consuming parts of early action-RPGs and adds a layer that makes the game impenetrable. The core gameplay and dungeon design shows that the developers knew what they were doing, and that they're capable of improving on Zelda 2's legacy, rather than merely following in its footsteps. The fact that they didn't take advantage of advancements in modern game design and usability keeps Elliot Quest from being anything more than a too-faithful tribute to a flawed game. Rating: 5.5 out of 10


Disclosures: This game was obtained via publisher and reviewed on the PC. Approximately 30 hours of play was devoted to single-player modes (completed 1 time).

Parents: The game is not rated by the ESRB, but it contains blood, fantasy violence. You shouldn't have too much trouble letting your kids play this. The gameplay largely involves killing monsters with arrows, and it's far enough into the realm of fantasy that you should find it fairly harmless. There's a few cut-scenes that meditate on morality and loss, but they're a fairly small portion of the game, really.

Deaf & Hard of Hearing: You should have no trouble playing the game. There are no audio cues at all that might interfere with you navigating the island of doom.