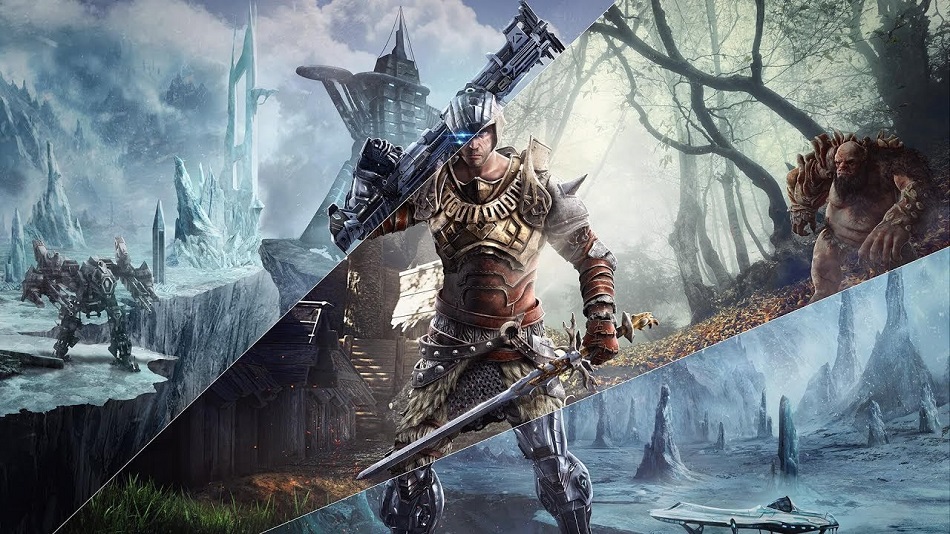 LOW Trying to hit anything further than twenty feet away with a bow.

WTF Is there seriously not a character sheet? I have no idea how much health I have.

Elex is, at times, like an all-sprinkles sundae. The developers have taken every element that players respond to and crammed it all into one title. Magic! Lasers! Mutants! Mad Max people! It’s all here. The result should feel like an overstuffed, stumbling Frankenstein unsure what it’s supposed to be, but to the developers’ credit, they’ve managed to not only wrangle this amorphous beast into a coherent whole, but also built a strong action/RPG out of it.

Set a hundred and fifty years after a meteor made of a magical mineral called ‘elex’ nearly wiped out human civilization, Elex tells the story of various factions that have come into being since the cataclysm.

The world has broken up into four distinct areas, each one with a different relationship to elex. The villainous Albs consume it to speed human evolution, frequently creating hideous mutants. Clerics are a religious sect who build machines powered by elex, worshiping the meteor as divine intervention. Berserkers are essentially Vikings who’ve managed to find a way to transform elex into a source of magic to purify the polluted world. And Outlaws? Well, they’re a bunch of scumbags who hang out in the desert doing drugs. 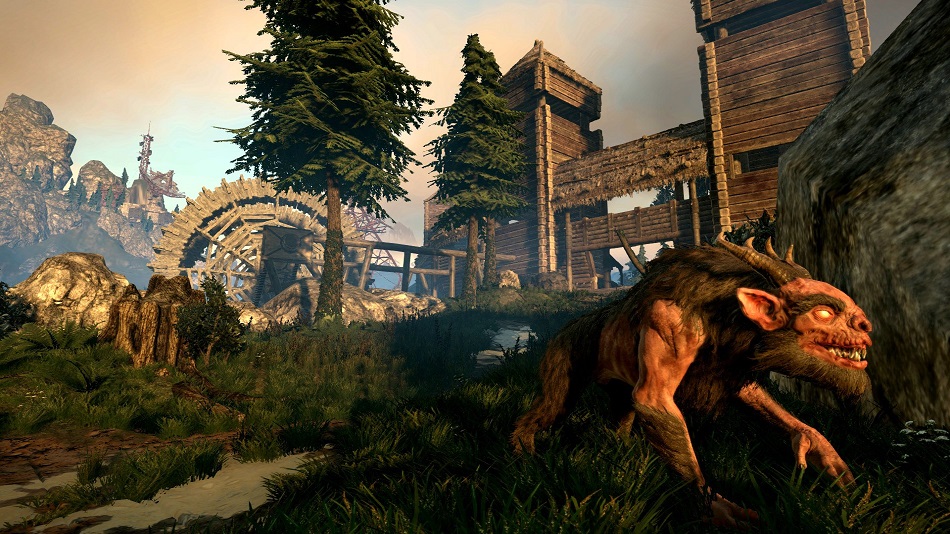 The player controls Jax, an Alb military commander who’s betrayed by his own people and left for dead. Cut off from the source of his powers, he’s reduced to a weakened husk and forced to learn new skills. he’ll have to align himself with one of the factions if he wants to survive, so the player is spoiled for choice when it comes to the type of character they want to build.

While each faction has melee and ranged weapons that all share basic controls, there are huge variations in the way Elex plays with each of the three options. Berserker magic allows players to quickly swap between swinging a claymore and tossing fireballs. Clerics have an array of super-powerful energy weapons, and their ability to control minds makes conversation-based quests considerably easier than they would otherwise be. Outlaws have access to a wide variety of stims that they can use to buff themselves to superhuman levels.

Players are free to build a character and play however they want. Even those shy about excessive combat will have a wide variety of options here. While there are a number of unskippable fights, I was shocked by how many options existed for avoiding conflict. Bribery, skill checks to open dialogue choices, quests with two or more competing parties that can be played against each other – there’s some fantastic adventure design here, and that’s not even mentioning the native fauna. 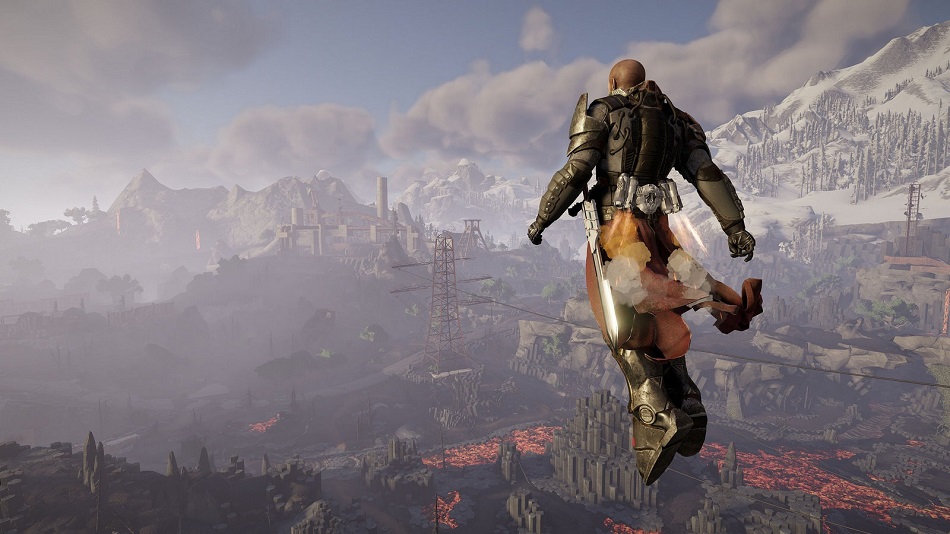 All of the local animals have been warped into vicious monstrosities that constantly hunger for flesh, and in an especially nice touch, the monsters are all so unrelentingly hostile that they can easily be pitted against one another. Whenever I found myself outmatched by an enemy force, I would find a pack of raptor-like monsters and let them chase me back to my foes. Before I knew it, my lizard pursuers would have the opposing force winnowed down to a manageable size, or they’d occasionally even finish a quest for me.

The monsters also act as soft gates to certain areas. Just like the player, monsters have levels – if they’re 1-5 levels above the player, they’ll take reduced damage and inflict more pain. Anything more than five levels above the player will be essentially unkillable. Sure, they’ll go down after being feathered with a hundred arrows, but arrows aren’t cheap so it’s better to wait until Jax is stronger before taking them on. The unfortunate side effect of this design is that it essentially locks the player into the Berserkers’ realm for the first five hours or so of gameplay. It’s a huge area and there’s plenty to do, but Elex doesn’t open up and reveal its true depths until Jax makes it to level 10 or so.

Once it opens up, though, Elex‘s world is magnificent and sized perfectly for a single player experience – it’s huge enough to take dozens of hours to explore, but densely-packed so that players never feel like they’re walking for the sake of walking. Around every bend there’s a dilapidated building or secret cave to explore, and nearly half the time I’d find myself stumbling on quest-related monsters and items before even discovering that they were a thing. In addition to quick-travel teleporters established in every region, the player also has access to a jetpack that lets them rapidly climb cliffs and buildings alike. 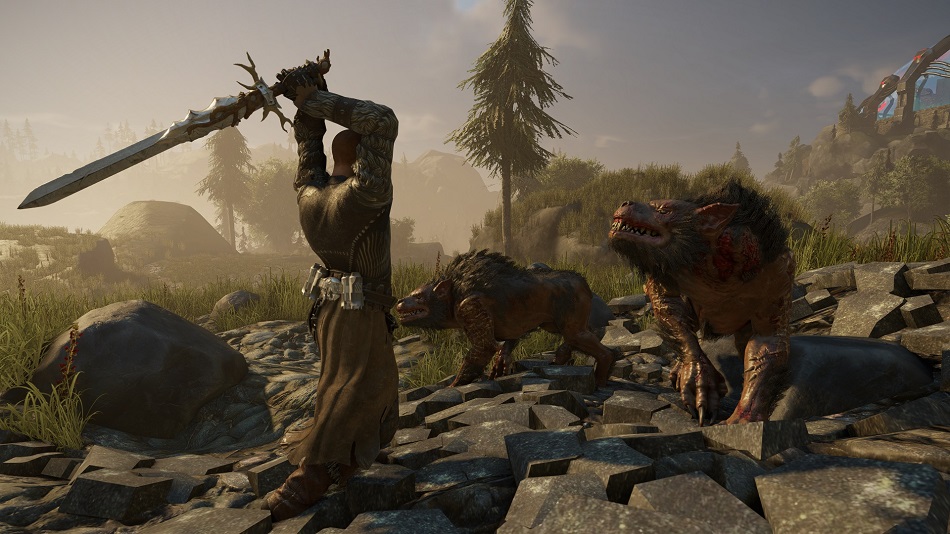 It’s a great addition to the open-world concept, as it makes the player feel they’re truly free to go wherever they want. Other than three small shielded areas, the player has full access to the entire map right from the start. It also lets the devs build some truly stunning vertical architecture. Elex is loaded with cliffside buildings, waterfalls, and sprawling industrial complexes, all with various platforms for players to perch on while planning their next move.

For all its strengths, there are some notable downsides to Elex. Its ambitious visuals can cause framerate dips during large-scale battles, and a quirk in the aiming system makes bows difficult to fire at anything past point-blank range. Most importantly, the map is weirdly uninformative. There’s no ‘points of interest’ system, so players are asked to remember which grey square is which when it comes to important buildings. More importantly, quest-givers are not listed on the map. If players want to see a good chunk of the hundreds of quests, they’d better get used to wandering around towns, searching out anyone with a non-generic name. The developers’ failure to mark anything but stores and trainers on the map means that players can easily miss huge amounts of content.

Elex is the best game Piranha Bytes has ever made. They’ve taken all the lessons learned on plotting, worldbuilding and character development from their work on Risen and Gothic and applied it something far more ambitious. The result is a truly great action-RPG, full of interesting characters, memorable quests, and amazing environments. While Elex‘s story comes to a satisfying conclusion and all the questions Jax starts with are definitively answered, it ends with the suggestion that there’s a much bigger story on the way, and I can’t wait for it to arrive. Rating: 8.5 out of 10

Disclosures: This game is developed by Piranha Bytes and published by THQ Nordic. It is currently available on PC, XBO and PS4. This copy of the game was obtained via publisher and reviewed on the PS4. Approximately 40 hours of play were devoted to the single-player mode, and the game was completed. There are no multiplayer modes.

Parents: According to the ESRB, this game is rated M and contains Blood, Strong Language, Suggestive Themes, and Violence . No kids allowed in this one, folks. Boozing, drug use, cannibalism, bloody violence, torture chambers, constant swearing, romanceable heroines, government conspiracies, world-ending meteors, giant killer turkeys — this is a checklist for everything you should keep the kids away from.

Deaf & Hard of Hearing Gamers: You will frequently be surprised by attacks from enemies – initial attacks only have audio warnings, but once you’re getting hit, there’s visual feedback. Luckily, there’s a perk you can buy that puts all enemies on the minimap, whether they’re attacking or not. All dialogue is subtitled.