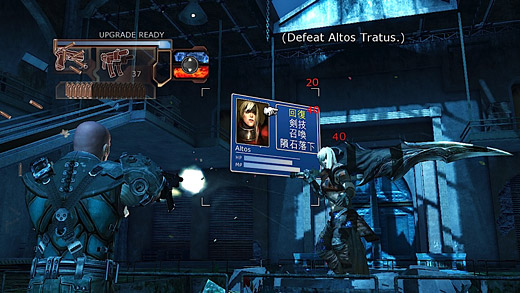 LOW The rest of the game.

WTF Doing a William Shatner impression does not count as a "joke."

The defining moment of Eat Lead: The Return of Matt Hazard happened in first of the game’s two "generic warehouse" levels (not to be confused with the "generic dockyards" level, which features warehouses). I'd just passed a checkpoint after killing a few water-gun-toting enemies (no doubt an incisive dig at the briefly-popular-five-years-ago trend of non-violent shooter games for younger kids) when I walked through a door and found nothing on the other side. Matt Hazard (the main character) plummeted through the floor, leaving me helpless to do anything but watch as the level's geometry disappeared into the sky above. "Aha!" I thought. "This must be a metatextual trap, where my character has fallen through a glitch in a 'poorly-tested' level!" I assumed that Matt would make some kind of a quip about the bad design, and I'd be rescued by the helpful magic entity who guides Matt through the game (named, not coincidentally, QA). Two minutes of uninterrupted falling later I was faced with a shocking realization. This wasn't an in-jokey reference to bad games, it was just a bad game.

Eat Lead is the story of a video game character who finds himself the target of the president of the company who makes his games. Just how the rules of this "Roger Rabbit but with video games" world work is never made explicit, but a muddled concept is a far smaller problem than the utter lack of empathy players will feel for the main character. The stakes of the game are some of the lowest I've ever encountered—if the player were to lose, the only consequence would be the loss of a single generic catch-phrase spouting video game hero. It's not like there's a short supply.

At least the gameplay is relatively competent. A cover-centric third-person shooter in the Gears of War mold, the hiding and aiming work as well as anything else on the market. While the animation is a little on the stiff side, it's more than made up for by the entertaining Tron-style "de-rezzing" that happens to enemies whenever they're killed. The gameplay fundamentals are decent enough that it's a little sad that they're employed in such mediocre situations.

The level design is almost shockingly bad—the game's premise (game hero has assets from random games thrown at him) should allow for unlimited possibilities, but other than the back room of a dance club transforming into a missile silo and a cruise ship turning into a galleon, the levels are inexcusably bland and repetitive. In addition to the three warehouse sections mentioned earlier, there's a restaurant, mansion, and an interminably long sequence set in an office building. It's clear that no one's imagination was being stretched during the design phase. 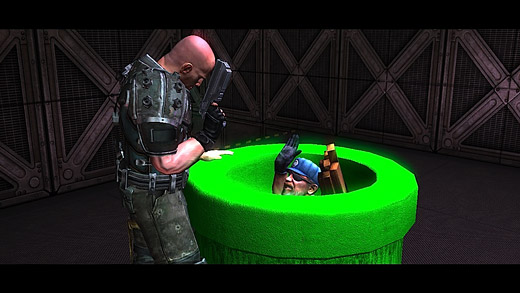 Just as disappointing is the character design. Despite the fact that Matt's foes could theoretically come from any genre, or any point in game history,  there's a numbing sameness to them. Be they old-west bandits, generic criminals or space marines they all follow simple "spawn in, find cover, shoot from cover" routines. Although it's possible that I'm being a little too harsh on the developers—it's probably good that they stuck to meat and potatoes for most of the game, because their flights of fancy are unmitigated disasters.

The only interesting enemies are the "Secret Soldiers of the Wafferthin", 2D enemies resurrected from the birth of shooters, who can flip 90 degrees and become invisible to the naked eye. It's conceptually interesting but frustrating in practice. The Nazis can't shoot or be shot while sideways, so the majority of my time fighting them was be spent standing in place, waiting for them to turn and become viable targets once more. Another odd choice is the inclusion of a Hydra from God of War, which wouldn't be such a chore if the game's camera were up to the task. It's not, though, and I racked up more deaths on this fight than the rest of the game combined, constantly flattened by one-hit kills from places I wasn't allowed to look.

All of these faults pale in comparison to the game's greatest sin—it's a comedy that fails to be funny. So many of Eat Lead's faults could have been overlooked if the game had simply been willing to aim a few jokes at itself. I would have had a lot more respect for the game had it been willing to look inwards and make some self-deprecating cracks about its own shoddy production values and poor design choices. Of course, that would have required a level of self-awareness that the developers clearly lack.

Another thing the developers lack: seemingly any knowledge about video games. The first rule of satire is that you must be intimately familiar with the subject you're satirizing. It doesn't help that the main character is a parody of Duke Nukem, a character who hasn't appeared in a new game in nearly a decade, and that no one has cared about for slightly longer than that. Eat Lead, a purported satire of gaming, has absolutely nothing to say about video games. One of the game's main characters is Dexter, Matt's "old partner" from a series of games. The entire premise of the character is predicated on there being such a thing as the "buddy cop" genre of video games. Since such a thing does not, in fact, exist, the joke misses is mark. In that there was no mark to hit. In one egregious example, the developers tried to excuse shoddy gameplay with an out and out lie about video game history. A loading-screen tip explains that the 2D foes can't be hit by melee attacks (which makes them all the more frustrating) because they're from 1993, when shooter games didn't have melee attacks. Ahem: 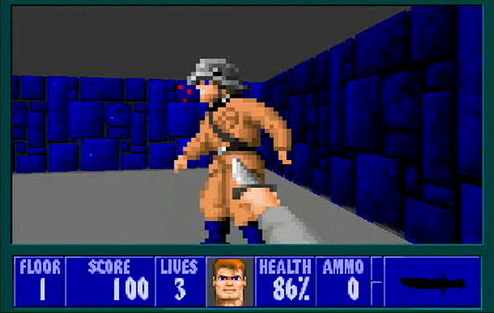 There's precisely one good moment in Eat Lead, and that's the Final Fantasy boss fight. After fighting his way through (where else but) another warehouse, Matt is faced with a character designed to answer the question "What if Cloud Strife and Sephiroth had a child?" (Also answering this question? 30% of fan-fiction) He floats in the air, speaks in text bubbles, and can only attack after his action bar fills up and he selects a spell from a menu. The weird dichotomy of watching a Final Fantasy character do Final Fantasy things while I ducked behind a broken wall and blindfired round after round of SMG ammo at him was a legitimately funny, entertaining moment. If only the rest of the game had offered some fraction of this scene's inspiration, Eat Lead might have even been worth buying, rather than just taking up space in the budget bin. Rating: 2.5 out of 10.

(* The pun in the picture's alt text is funnier than anything in the game. And it's not a funny pun.)

Disclosures: This game was obtained via retail store and reviewed on the Xbox 360. Approximately 8 hours of play was devoted to single-player modes (completed 1 time).

Parents: According to the ESRB, this game contains language, mild suggestive themes, violence. You shouldn't have too much trouble letting your kids play this. All the humour is PG-Rated, and the violence has been completely sanitized. It's not good, though, so if they like good games, you might want to take a pass.

Deaf & Hard of Hearing: You will find themselves neatly foiled. While the gameplay itself requires no audio cues, there are no subtitles of any kind. Apparently people with hearing impairments don't deserve humour in their games. I'd assume they will doubly appreciate the myriad, wholly unskippable, cut-scenes.

As bad as it might be in the final execution, you have to admit that it was a nice attempt at poking fun at games, genres and industry mainstays like the JRPG.

I didn’t play the game, but I did catch the
video I (hopefully) posted below. Had the rest of the game been pulled off as well as that cutscene–some of the gameplay is on display in that same video and leaves something to be desired–Eat Lead would be in Serious Sam territory as nice low-budget satire.