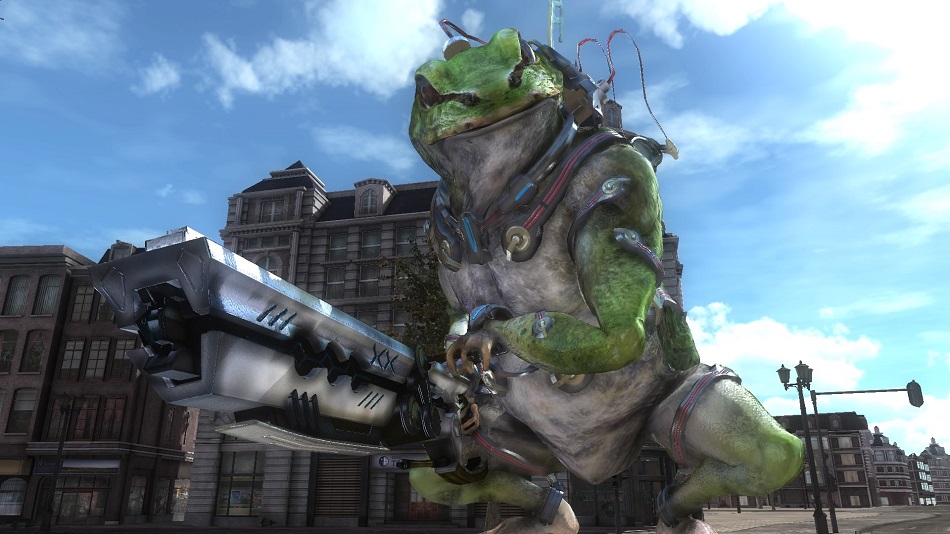 HIGH The walking fortress, in all its glory.

LOW Locking off the two highest difficulty levels until the game has been completed.

To fans of the Earth Defense Force series, these are unforgettable names that signify the titles of missions that have been remade time and again, with each new revision adding depth and challenge, and every refinement edging a great product closer and closer towards perfection. Those missions have all returned for EDF5 of course, even if the names are different, and once again, the developers at Sandlot have moved the franchise another notch along the track towards the heights the series has always striven for.

An epic action game in the purest sense of the words, EDF5 is another series reboot, with Earth once again having a traumatic first contact with monstrous alien creatures and being driven near to extinction in a grand war against them. That war will cover 100+ missions of non-stop third-person combat, a shockingly large variety of enemies, and one of the largest arsenals of pre-made weaponry ever featured in a videogame. Put simply, it’s EDF, only moreso. 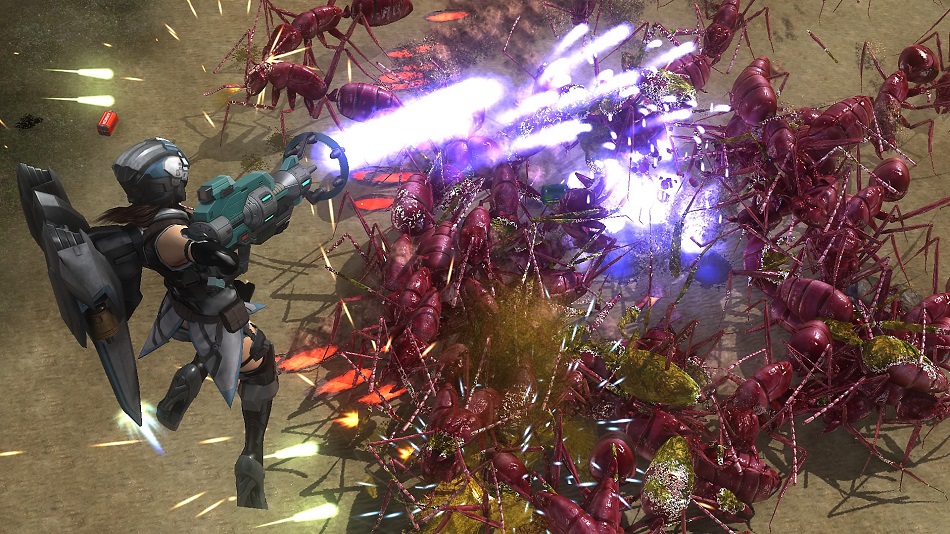 I don’t know whether the developers were listening to critics or simply paying close attention to those who purchased EDF4.1, (the previous installment) but either way, huge steps have been taken to fix flaws. The previous entry in the series introduced two new player classes – Fencers in powerful combat armor, and Air Raiders, who summon vehicles and airstrikes at will. The problem was that both were viable only in multiplayer games due to their support-focused roles. This effectively locked off half of the content to those who only ever play solo.

While the classes still impress in co-op, fixing their inability to solo was an obvious priority, and both have been given a complete overhaul. Now the Fencers can leap and glide around maps impossibly fast, zipping in to deal brutal melee damage and fading away before the giant frogs can spin up their laser cannons. Air Raiders, for their part, have a large suite of powerful weapons available from the start of the game, and now that the vehicles are easy to control and cheap to summon, players can spend as much time stomping around in mech suits as they want. Even the Ranger and Wing Diver classes have been tweaked, with the former being able to summon a few exclusive vehicles, and the later offering series-best flight controls.

Yes, I did write ‘giant frogs’ above. In EDF5‘s biggest departure from the series’ previous designs, bipedal robots have been axed completely from the lineup, replaced by twenty-foot-tall cyborg frogs with energy weapons. There’s not an enemy here that isn’t a thrill to shoot, but the space frogs are on an entirely other level. Not only do they bleed profusely (their wounds paint buildings with a speed that the Splatoon squids could only dream of) but all of their limbs can be blown off, which opens up obvious strategic possibilities. Harried by artillery? Just use a sniper rifle to blow off their arms! Sick of their quick jumping dodges? Blast off their legs with a rocket launcher! Every battle with these giant-yet-speedy creatures is a pleasure as they use cover, employ teamwork, and regenerate their injuries. There are been plenty of memorable foes in the EDF canon, but the space frogs are the most interesting I’ve ever encountered. 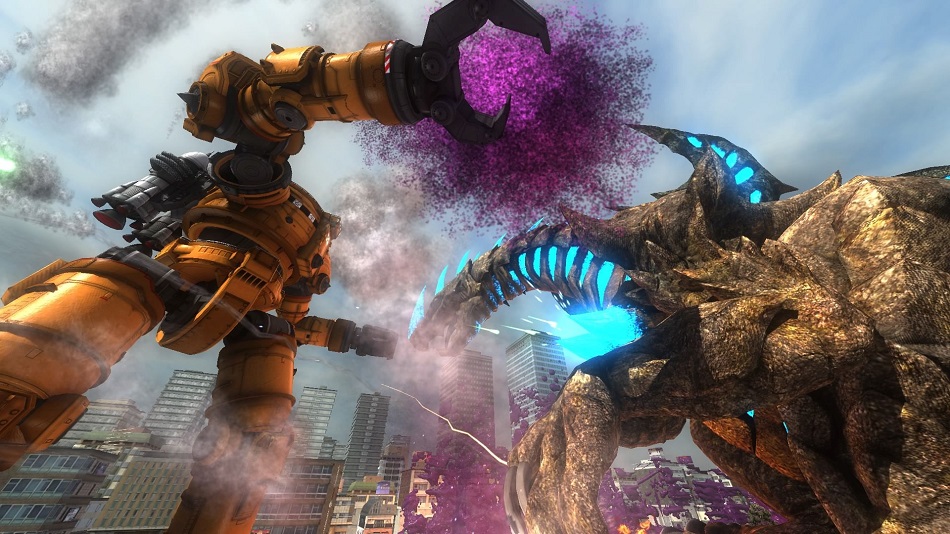 Naturally, EDF‘s trademark massive insects are back, and they’ve been upgraded with an eye towards making things more playable. Where previously the various ants, spiders, and wasps emerged from holes in the ground, now they’re teleported in by huge golden spears fired from spacecraft in orbit. One of the most frustrating elements in the past was trying to figure out where the enemies were coming from, and struggling to get line-of-sight on a mound of dirt half a kilometer away before it swamped players with crimson ants. Now the enemy spawners literally stick out like sore thumbs, daring players to attack them. It’s a perfect encapsulation of the EDF ethos – there should never be more than a few seconds where something isn’t exploding in mixture of fireworks and gore, and these highly-visible spawners facilitate the process.

As usual, EDF excels in storytelling through gameplay. The opening forces the player – cast as a civilian employee on an EDF base – to learn the controls during an alien invasion. From there, news and military broadcasts let the player know how the world is suffering in the onslaught. Levels will introduce enemies that the player isn’t able to kill, just to reinforce how woefully outmatched humanity is. Later levels are all set on shattered versions of previous maps, again ramming home the obvious – this is a fight against extinction, and there’s almost no chance of winning. Whether it’s the hysterical screams of the dying over the radio or an image of a ship considerably larger than the city it’s hovering over, EDF5 brilliantly establishes the stakes.

Somehow the EDF series has the ‘epic action’ genre all to itself. They haven’t let their monopoly lead to complacency, however. While some might look at EDF5 and point out the recycled levels and long-established gameplay mechanics, I see developers devoted to delivering the best possible version of a concept, and an unwillingness to settle for merely improving the graphics each console generation. This is a series that truly gets better with each iteration, and as such, this is the best EDF game yet. Rating: 8 out of 10

Parents: According to the ESRB, this game is rated M and contains Blood and Gore, Violence. While I’d normally say these games were fine for most teens, the move away from battling robots and towards fighting recognizably humanoid creatures gives the whole thing a much more unpleasant vibe. There’s just so much dismemberment in this, y’all. It’s crazy.

Deaf & Hard of Hearing Gamers: There are no audio cues that will affect gameplay, and you’ll have no nasty surprises because every enemy, ally, and airstrike is visible on a convenient map. That said, the game has no subtitles, so you’ll be missing out on almost all of the game’s story, other than the text missions descriptions you can read before embarking. This is fairly close to inexcusable – not only is the story well-told, there are extensive tutorials offered in many levels, as characters on the radio will explain enemies’ abilities and offer tactics to best combat them – it’s possible to muddle through, of course, but the lack of subtitles really hurts the experience for the hearing-impaired player. 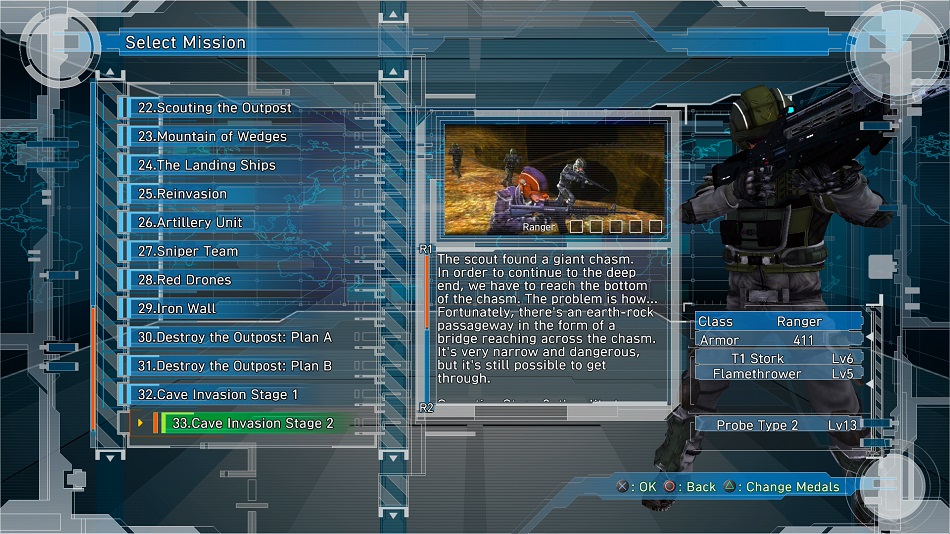 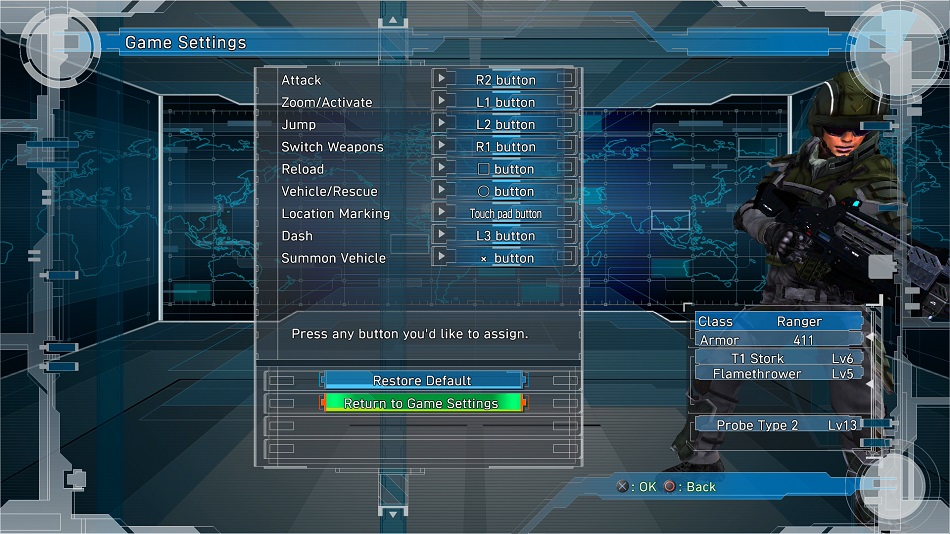 I love this series – I wish it would come back to the Xbox as EDF 2017 was a most played game for years.