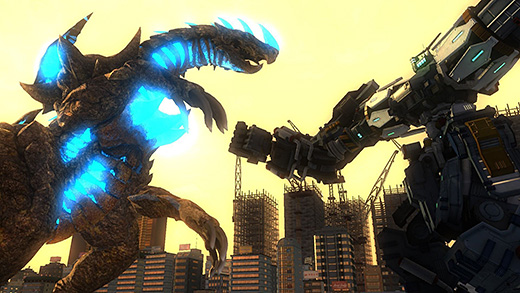 HIGH Punching a Godzilla right in its stupid face.

LOW Seriously, how can spiders fire webs through buildings?

When heaping praise upon the original version of this game, EDF 2025, I neglected to mention its largest problem—a framerate which skipped and chugged whenever a screen full of enemies was vaporized by a cascade of huge explosions.

I can't offer an excuse for this omission. The only explanation which seems plausible is that I was so overwhelmed by the game's high points—huge enemy variety, great co-op, amazing level design—that some slowdown wasn't a big blip on my radar.

So, to anyone who read my review and was disappointed by technical shortcomings: I apologize.

On the plus side, the developers at Sandlot have now solved those problems. Earth Defense Force 4.1 The Shadow of New Despair is delivered with the silky-smooth visuals the franchise always deserved, but never before received.

Yes, EDF is gorgeous now. While visual fidelity has never ranked particularly high in its list of priorities, I was delighted to see the amazing robotic monstrosities realized in crisper resolutions with better animation. This is the best the franchise has ever looked.

For example, new lighting effects transform underground levels from endless brown caves into claustrophobic high points in the campaign. These sections are now pitch black, with only the flashlight attached to the player's gun illuminating their path, and the way energy weapons light up tunnels in a multicoloured strobe show has to be seen to be believed.

There have also been design improvements. Most of the levels have more enemies onscreen to take advantage of more powerful hardware, and many areas have been remixed, with enemies appearing at different points, or the action moved to a new map. New players will get a better game than they would have if they'd jumped aboard day one, and longtime fans are offered plenty of new content to keep them interested in a return trip.

I'm also happy to say that Godzilla is back. EDF 2017 had both regular and mecha-godzilla stomping around in a couple of levels, but they were sadly absent from 2025. New Despair restores the big lizard to a place of honor, offering two levels where the beast is an unstoppable, city-stomping monster, followed by two in which the player is asked to defeat him by piloting giant Rock'em Sock'em Robots.

Despite its sharp presentation and clever new additions, New Despair isn't perfect. Even though the technology now exists to support the super-weapons from previous titles, I could find no sign of them after beating the game with two different character classes. Additionally, the developers have made the baffling decision to stick to a 'loot drop' system for doling out the game's hundreds of weapons, rather than a more modern system like credits or crafting.

Once a player's weapon collection gets close to 50% of the total number, it becomes extremely difficult to find new arms. The game makes no effort to let players know which level and difficulty combinations are required to unlock new weapons, and the disappointment of grinding through a level for the twentieth time only to discover that none of the loot is new is a feeling that should exist only in the world of miserable free-to-play games.

Adding insult to injury, the developers have taken the two levels which were previously most useful for weapon-farming and altered them so that mass collection of goods is no longer possible. This change is just baffling—are they actively trying to prevent players from seeing everything their game has to offer?

Despite those complaints, Earth Defense Force 4.1 The Shadow of New Despair is still the same incredible experience it was two years ago, only better. For new players it's a game full of twists and turns, daring level design and terrifying foes. For veterans it's the best version yet of an amazing formula, just as fresh and thrilling. It's a stunning experience from beginning to end, but I do hope the developers can fix the metagame elements and bump perfection up to the next level. Rating: 9 out of 10

Parents: According to the ESRB, this game contains blood, language, violence. You shouldn't have too much trouble letting their kids play this. There's endless killing, sure, but it's all bugs and robots the kids will be shooting, and almost none of the bugs have red blood. There's no prurient content—or really any content at all beyond shooting the aforementioned bugs and robots. It's a mystery why this isn't rated T. The ESRB claims there's some swearing in the incidental dialogue, but I never noticed it.

Deaf & Hard of Hearing: You will find yourselves able to play the game without any trouble—an onscreen radar keeps you apprised of all enemy locations at all times. No surprises here! The downside is that the game's entire story is told through in-mission radio transmissions, none of which are subtitled. This is especially troublesome because some enemy weaknesses are revealed through those radio conversations—although you shouldn't have too much trouble figuring out the importance of blasting away at the glowing parts of the various machines!