They're Back, and Not Screwing Around This Time 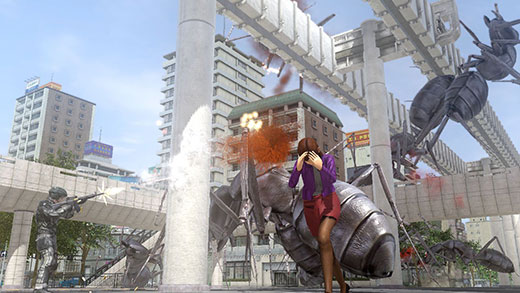 HIGH "They're eating the planet!"

WTF I guess I taught that battleship a thing or…. Oh my god!

I was not shy about describing this game's predecessor, Earth Defense Force 2017, as  2007's best game.

That tale of Japanese soldiers attempting to save the world from giant insects and killer robots was amazingly inventive and endlessly replayable, but after that success the franchise went dark with only the lamentable Insect Armageddon (by different developers) keeping the name alive. Finally, a full seven years later, Sandlot has returned to offer an update that presents everything EDF2017 did, only bigger, better, and without a cameo by Godzilla.

As the title suggests, eight years have passed since the last time the Earth was invaded by the Ravagers, a monstrous force of alien resource-hunters with a penchant for using science to embiggen earth fauna. Things have returned to normal, and the world has almost finished rebuilding after the last near-apocalypse, so of course it's the perfect time for the Ravagers to return in almost exactly the same way they did last time.

plays so much like its predecessor that it almost feels like a remake. While everything looks far more prettier this time around-destroyed buildings dynamically crumble according to physics rather than just sinking into the earth-it's fundamentally the same game as 2017 was. The same missions even happen in the same order, with the same monsters making appearances.

In fact, at first it seems like the only major change is the inclusion of new playable character classes, each with their own complete arsenal and health bar that has to be manually leveled up through in-game drops. If that had been the case, 2025 would still be a worthwhile production since the new classes (jetpack trooper, support/vehicle driver, power armor soldier) are well-balanced and offer significant gameplay changes. And with 90 levels in the base game (and another 40+ available as DLC) that adds up to a huge amount of raw gameplay.

However, EDF2017 only feels like a remake for the first third of its running time, and what seems like laziness quickly proves to be clever manipulation on the part of the developers. Offering the player carbon-copy missions lulls them into a false sense of security, and effectively builds the in-game narrative of an Earth Defense Force that's grown overconfident with its successes – one of the first game's most frustrating bosses makes an appearance here, only to be dispatched with a single cruise missile while the ground troops cheer. Even the Mothership, the final boss of the previous game, can be destroyed just ten hours in.

It's only after the EDF thinks they have the Ravagers on the ropes that EDF2025 reveals what it's actually about, and later in the game the Ravagers do something so fantastic that it can't be described without ruining one of the year's best gaming surprises – suffice it to say that it's only when the story seems like it should be winding down that things really get started, and the game introduces an entirely new set of enemies, nearly doubling what the first game offered.

That surprise aside, EDF2025's greatest accomplishment is how much variety in level design the developers manage to squeeze out of some very simple situations. Missions are never more complicated than "monsters are in a location: go kill them" yet this structure never gets old, no matter how many variations the game offers. The maps are so huge that players will be able to play four or five missions before realizing that they were all taking place in the same part of the city. Enemies are meted out gradually over the length of the game, ensuring that there will be continual surprises for its 30-hour playing time. There are even two huge maps that exist for a single mission each—enormous setpiece battles that dwarf the aspirations of most other games, let alone their accomplishments.

While EDF2025 is an incredible experience with no real competition in its field, of course there are some minor flaws. For instance, while vehicles are now a viable option to use on harder difficulties (they level up along with the rest of the game's weapons) helicopters are still nearly impossible to pilot, and tanks continue to lack targeting reticles for no reason I can fathom.

Online multiplayer works great, but the game has two different completion tracks—one for online, one off. So, if a player is having trouble beating a particular level on 'Inferno', they can get a local player to help them beat it split-screen. If they go online, it won't count towards their overall completion rating. Why? No idea. This decision is baffling.

, by comparison, is a full-priced game. To triple the price of a sequel is a bold move, and one that makes a statement about how improved the game must be. Luckily, EDF2025 really is that much better than its predecessor. With the art design of its monsters, its staggering amount of content, and battles of a scope that would make some RTSs envious, EDF2025 is a masterful game, almost flawless in its execution.

Was I sad to see that Godzilla didn't make a return appearance? Absolutely – but he's been replaced by someone equally wonderful – and to say anything more would be to spoil a wonderful surprise in a game that's absolutely full of them. Rating: 9.5 out of 10


Disclosures: This game was obtained via publisher and reviewed on the Xbox 360. Approximately 45 hours of play was devoted to single-player modes (completed 2 times) and 8 hours of play in multiplayer modes.

Parents: According to the ESRB, this game contains blood, violence. You shouldn't have too much trouble letting their kids play this. There's endless killing, sure, but it's all bugs and robots the kids will be shooting, and almost none of the bugs have red blood. There's no prurient content – or really any content at all beyond shooting the aforementioned bugs and robots. Honestly, I'm not sure why this is an M and not a T.

Deaf & Hard of Hearing: You will find themselves able to play the game without any trouble – an onscreen radar keeps you apprised of all enemy locations at all times. No surprises here! The downside is that the game's entire story is told through in-mission radio transmissions, none of which are subtitled. This is especially troublesome because some enemy weaknesses are revealed through those radio conversations – although you shouldn't have too much trouble figuring out the importance of blasting away at the glowing parts of the various machines!