Musou Goes Open-World! But Should It? 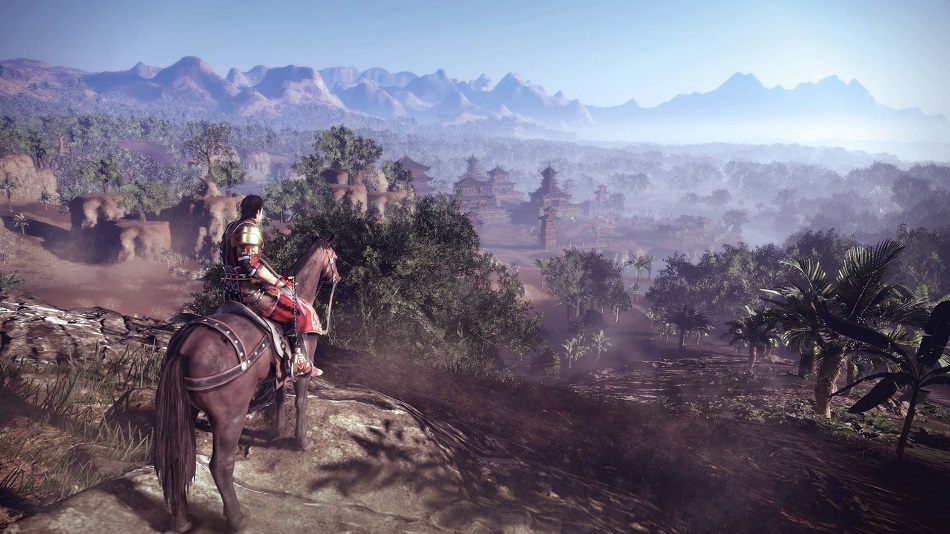 HIGH The fate of the monstrous Lu Bu.

LOW Watching the framerate chug every time I get into large-scale battle.

I’ve been playing a lot of Musou games lately. After being profoundly bored by Dynasty Warriors 3 on the original Xbox I never gave the series a second look, but was successfully lured in to Omega Force’s signature genre by their work with Gundam, Fist of the North Star, and Zelda. Now that I’m happy to play just about any Musou game – especially the delightful Warriors All-Stars, which I can’t recommend highly enough – I thought it was high time to give the main series another chance.

…I should have stayed away.

Set at the end of the Han period of Chinese history, Dynasty Warriors tells the story of three warring factions as they attempt to forge a new future for the fractured empire. The storyline hews closely to actual historical events, letting the player take part in famous sieges, duels, alliances and betrayals that made up some of the most interesting events in China’s history. Unfortunately, these battles are shoehorned into a genre that doesn’t suit them.

Rather than focus on the battles as most other Musou games do, this new Dynasty Warriors has decided to embrace an open-world concept for no real reason I can think of.

There’s a seed of an interesting idea here – as each of the nine chapters begins, the player will have a main goal to accomplish for whichever faction they’ve selected. That goal is assigned a ‘suggested level’ that the player should be, and it’s usually prohibitively high. By completing sub-missions, the player can both raise their own level and lower the level of the final mission, which should mechanically encourage them to explore the world and take on additional challenges. 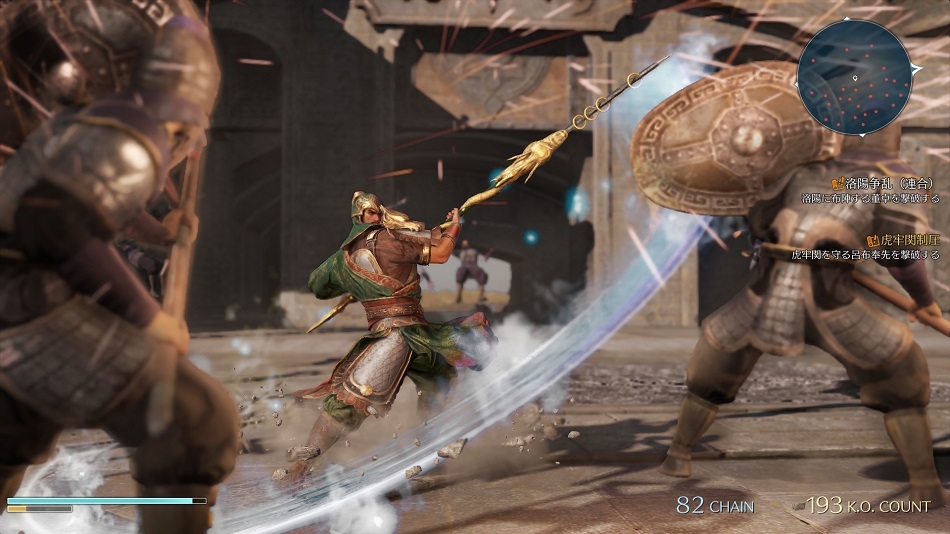 Unfortunately, most of the challenges come down to ‘go to an area, fight an officer and his twenty guards’. Now, occasionally there are additional officers or the player has to use a grappling hook to climb into a castle, but that’s as complex as things get.

As usual for a Musou game, the grunt soldiers are meaningless and the player only has to worry about the officers. However, even they aren’t particularly challenging – players are armed with a useful dodge and a suite of guard-breaking techniques, so all battles are manageable with a little bit of practice.

The stultifying repetitiveness of these fights sucks all of the joy out of the battles. Instead of the huge-scale conflicts in other Omega Force games where I laid waste to hundreds of foes every minute, I found myself riding around a huge empty map for minutes at a time so that I could spend twenty seconds fighting a handful of goons, only to turn right around and do it all over again a dozen times per chapter.

It gets old, fast.

The developers have also attempted to add traditional open-world mechanics to the game, without much success. For example, players can ride around the map looking for animals to hunt and resources to craft into equipment, but it’s rarely worth the effort — it’s time-consuming, and the crafted weapons aren’t much better than those bought from blacksmiths.

Hunting is an out-and-out disaster. The player is told to stay away from animals and use a bow to kill them because getting too close causes deer to flee or predators (like wolves and tigers) to attack. Unfortunately, the shockingly short draw distance means that players will frequently witness their prey winking out of existence as they attempt to aim headshots. The distance at which animals pop in is almost exactly the distance at which they start to notice the player, so it was better idea to avoid hunting entirely until I was tough enough to take on animals with my blades. Of course, by then I didn’t need any of the items I could craft from them, making the whole thing seem kind of pointless. 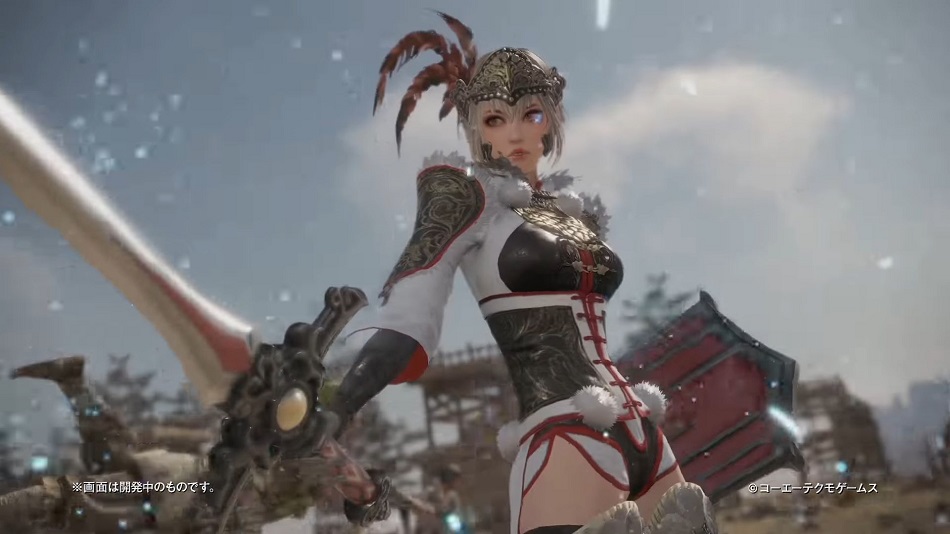 While I’m rarely one to complain about graphics, I simply can’t believe that this game is made by the same developers who released the glorious Berserk and Warriors All-Stars last year. It’s visually indistinguishable from an Xbox 360 game, and the framerate and pop-in are inexcusable. Any time more than fifty figures appear on the screen – which is the entire hook of the genre – the action becomes a jerky mess and renders it nearly unplayable.

This is also an open-world game that encourages players to ride from location to location on horseback, but is incapable of loading the world in front of that horse quickly enough so that the player doesn’t consistently run into invisible walls which turn out to be barriers that weren’t rendered fast enough. This is a technical disaster.

From a story standpoint, I found the game serviceable, but not much more. The personalities were clear and the intrigues were well-handled, but it was mostly presented in a flat manner. The vast majority of cutscenes involve largely interchangeable officers discussing what they’ve just done, talking about what they’re going to do next, and then breaking up until a few more missions have been completed. There are a few great moments buried in the plodding dialogue, but they’re few and far between.

The dub also gets a little cringey at times, as there was obviously no clear direction as to whether the characters should have accents or not, creating a complete lack of consistency in the vocal performances. Also, the characters don’t seem to know who they’re talking to. I played the game as Cao Cao (the main character of the Wei storyline) yet I would frequently find myself delivering messages to other Wei generals and having them tell me to carry their regards back to… myself.

Dynasty Warriors 9 is a complete mess. The open-world elements like crafting, hunting and finding landmarks don’t fit with the story, and the technological sacrifices made to include them ensure that the mass battle sequences are nearly non-functional. This is an embarrassment for Omega Force, and if it had been my first experience with the Musou genre, I might never have played another – hopefully they’ll drop this open-world stuff and go back to what they do best. Rating: 3.5 out of 10

Disclosures: This game is developed by Omega Force and published by Tecmo Koei. It is currently available on XBO/PS4/PC. This copy of the game was obtained via publisher and reviewed on the XBO. Approximately 30 hours of play were devoted to the single-player mode, and the game was completed. There are no multiplayer modes.

Parents: According to the ESRB, this game is rated T and contains Alcohol Reference, Mild Language and Violence. This one should be largely safe for even younger teens. The violence is completely bloodless, and battles frequently end with characters fleeing rather than being killed. Everyone in the game drinks casually, though, so you may want to consider how the game portrays heroic alcoholism. I didn’t see any of the language they talked about, but I can’t imagine it would be too severe.

Deaf & Hard of Hearing Gamers: There are no audio cues that don’t have visual accompaniment. All dialogue is subtitled. The game is fully accessible.