Beat the clock… with a sledgehammer. 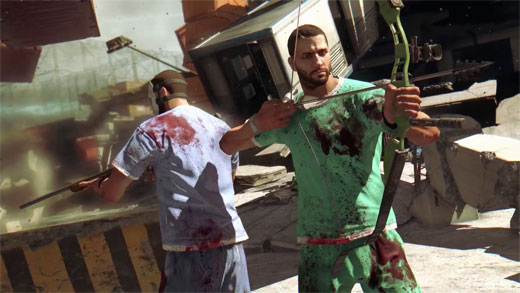 HIGH Playing what amounts to first-person Prince of Persia.

LOW Trying to accurately throw something heavy without the benefit of a predictive arc. This is stuff we need, developers.

WTF "So you've managed to kill all my zombies, have you? Maybe it's time to start killing each other! No, I don't have any idea why you would do that."

In its first story-expanding DLC, Techland brings players to a part of Harran that had gone unexplored until now: the abandoned sports stadium. Although, that's not entirely accurate—the environment is just a tiny fraction of an actual stadium. Really, it's just one level of the parking lot, the entrance hall, and maybe half of a soccer field. It's sort of hard to tell, since the turf has all collapsed into more parking lot below.

While the DLC may not offer anything near the scope of the main game, it more than manages to excel at the amazing mission and level design that made Dying Light such an incredible experience earlier this year.

The premise is simple. A madman has decided to create a Saw-style series of challenges for Crane (and some co-op partners, ideally) to run through. These involve beheading parkour zombies, leaping from lighting fixture to lighting fixture in a cleverly designed atrium, and going big game hunting with some double barreled shotguns.

On the downside, there's almost no plot to speak of. There's no backstory for the mastermind's madness, and the content ends with a frustrating lack of closure, since the repeatable nature of the challenge means that players can't finish things by murdering this evil puppetmaster. The design, however, is peerless.

Each of Bozak's three areas is perfectly built to encourage players to find the fastest path, loading every area with ladders, hanging platforms and scaffolding without seeming contrived. There are even checkpoint races designed to familiarize players with each area so that they'll be comfortable racing through them when on a tight time limit. While the areas aren't huge, there's a pleasing verticality to all of them. Whether I was balancing on water pipes to sneak past a horde dangling fifty feet above a concrete floor or leaping from a zipline to a suspended cargo container, I was constantly thrilled at the playground the developers had constructed to push their game's mechanics to the utmost.

As one might guess, it's not a long piece of DLC. Completing all of the trials takes around 45 minutes for a single player, not counting having to restart the whole thing every three deaths. (It's considerably more difficult when played alone.) A full team can make it through in under half an hour, which is a fair challenge without taking up too much time for four people. Luckily, the content is extremely repeatable, with incentives built in to keep players coming back.

After completing a certain number of challenges, players are given weapon 'dockets' which can be redeemed for high-level gear in the main game. Completing everything will reward players with blueprints to make a bow, which finally gives players a chance to pick off distant zombies without worrying about attracting unwanted attention.

The stadium is also a great place to quickly level up both combat and agility—when I started playing The Bozak Horde for review, I had an across-the-board level 5 character. After just a few trips through, I'd more than doubled my stats.

The Bozak Horde isn't very large and doesn't offer any of the fascinating storytelling flourishes of the main game, but it's fresh and creative, with the developers doing a great job of showcasing their mastery of traversal and combat construction. Anyone who enjoyed Dying Light will find this a satisfying diversion for at least a few hours while waiting for the dune buggies coming down the line. Rating: 8.5 out of 10


Disclosures: This game was obtained via publisher and reviewed on the PS4. Approximately 5 hours of play was devoted to single-player modes (completed 2 times) and 2 hours of play in multiplayer modes.

Parents: According to the ESRB, this game contains blood and gore, strong language, intense violence. It's a game about a fake Jigsaw Killer strapping a bomb to a person's leg and forcing them to kill hundreds of zombies. No. Don't let your children play this.

Deaf & Hard of Hearing: You're going to have a little bit of trouble. Without noise to warn you about zombies, there are going to be plenty of nasty surprises. Fast-running and especially strong zombies show up on the minimap, as do all human foes, but there are plenty of lumbering oafs waiting just around the corner to grab the unsuspecting, and without their tell-tale groans to warn you of their presence, it's going to be a challenge. Fortunately, all dialogue is subtitled, so you won't miss Bozak's warning about what the next challenge is going to consist of..