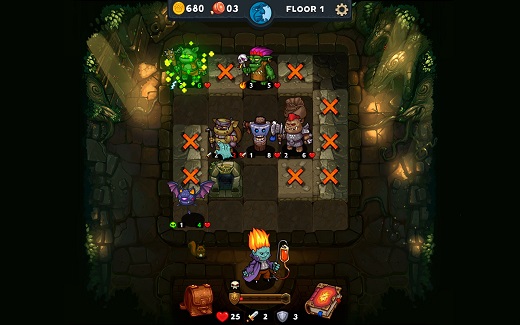 HIGH Managing to save up enough lanterns to be able to skip five levels before the last boss.

LOW Starting a level surrounded by deadly traps on tiles that wind up containing monsters.

WTF Yes, that certainly is an evil cow.

There are plenty of games out there offering the chance to run through a dungeon in just a few minutes by clicking on a screen. The explosion of the roguelike and roguelite genres have made Steam into a paradise for anyone looking for bite-sized pieces of D&D that don't ask for anything but a brief bit of their time.

With this in mind, it's fair to say that Dungelot isn't particularly original—players clear a dungeon one tile at a time, fighting monsters and looking for the key to the next level. However, with its wonderful cartoon character graphics, easy-to-learn rules, and an upgrade system which offers concrete rewards quickly, it's one of the most addictive and accessible entries I've encountered.

Players start the game as a Paladin tasked with bringing an evil cow to heel, as well as rescuing the heroic vampire she has taken hostage. This is accomplished through a surprisingly deep dungeon crawling mechanic.

Every level is broken up into a grid of 25 squares. Each one can contain a monster, a key to delve deeper, treasure, or nothing at all. Obviously the game owes a bit of credit to Minesweeper, but it plays completely differently than that much-beloved timewaster, as players have no chance of puzzling out where a monster might be—every click is an act of blind luck.

…Except when it isn't

After a few runs through the first dungeons (dying more frequently than I'm comfortable admitting to) I began to learn the rules and appreciate its subtleties.

In addition to each monster having distinct abilities (they attack when found, steal items on death, buff other enemies) many of them lock off tiles that they're adjacent to, forcing players to kill them before being able to continue searching for the golden key. This creates interesting strategic opportunities, as players will find the most success by carefully clicking on tiles which minimize the amount a sudden monster appearance can harm them.

This technique isn't quite the same as trying to suss out where a mine is, but as players get deeper into the dungeon and their stock of health and powerful spells dwindles, the tension becomes palpable. Dungelot is the rare roguelike that would prefer players avoid monsters if at all possible. Since players level up only outside of dungeons, there's no upside to fighting monsters while in them, beyond earning a little extra gold. It's worth noting that killing all the monsters on a level earns the player a special treasure, but attempting to do that on every floor will quickly spell doom for even the most well-prepared adventurer.

Dungelot also does a good job of mixing things up. In addition to distinct monsters for each of its three worlds and random bonus levels, new types of tiles are constantly added which have devilish means of punishing the player for clicking on them.

Towards the end of a run, a number of a level's tiles will be trapped and assigned a 'countdown', letting the player know how many other tiles they'll have to clear before the trap disappears. This can create difficult situations in which the player has to decide between fighting a powerful monster to make some traps disappear, or to just take their punishment from a trap—sometimes a known trap effect is less painful than an uncertain fight against a sandworm.

Beyond its fundamentally solid gameplay, Dungelot offers good reason to come back for a second or third playthrough.

Beyond the starting Paladin, there are three other characters to be unlocked. Each has to be leveled up separately, but any perks the player purchased during their first time through will apply to all characters, which does a lot to smooth out the difficulty for players as they learn each character's distinct playstyle.

It's colourful, simple to pick up and play, and only the longest dungeons at the end of the game take more than a few minutes to conquer or be defeated by. Dungelot may not be the perfect roguelite, but it's certainly close. Rating: 9 out of 10

Disclosures: This game was obtained via publisher and reviewed on the PC. Approximately 16 hours of play was devoted to single-player modes (completed 1.5 times).

Parents: This game was not reviewed by the ESRB, but it contains blood, fantasy violence. I can't imagine you having any trouble with your children playing this game. It's harmless dungeon crawling that the whole family can enjoy. No graphic violence, nudity, or swearing—the closest thing to questionable are the steins of mead lying around the mansion that the characters relax in between missions.

Deaf & Hard of Hearing: You'll be totally fine—no audio cues, all information is presented as text.

Remappable Controls: The game does not offer remappable controls, but it was designed to be played entirely with the mouse, and requires no quick reflexes, so that shouldn't provide much of an obstacle.