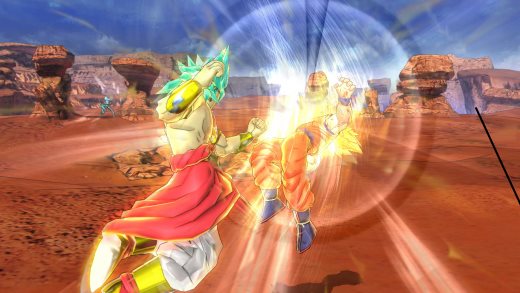 HIGH All 4 Freizas vs All 4 Cells. Finally.

LOW Getting punched out of my Spirit Bomb for the eighth time in a row.

WTF Saibamen? They're a joke enemy, right? Wait, why are there fifty of them?

I don't know exactly when this particular technological Rubicon was crossed, but something peculiar happened as I was playing Dragon Ball Z: The Battle of Z

—I noticed that this video game actually looks considerably better than the anime on which it was based.

While I rarely approve of using simple graphical quality as a reason to recommend or discourage people from trying a game, in the case of adaptations, it's fair to ask how faithfully a game manages to recreate the aesthetic of its subject matter. TBZ's 3D cell-shading not only completely captures the feel of the anime and manga, but renders it in a state that heretofore existed only in the rose-tinted memories of series fans. TBZ looks incredible. That it's also the best-yet representation of Dragon Ball Z's famous zero-gravity teleporting-intensive combat is just icing on the cake.

More brawler than fighting game, TBZ asks up to four players to fight their way through most of the original manga's key fight scenes. Intended primarily as a four-player co-op experience, players will find themselves and three friends (or CPU-controlled bots) free to fly around huge open 3D arenas, punching enemies high into the air and then slamming them back down through stone outcroppings that shatter into millions of pieces.

Determined to focus on the best parts of the DBZ experience, the game offers a shockingly huge amount of content. Every major fight of the manga is offered as a distinct level, with almost every combatant of note being an unlockable character. Players not satisfied with reliving the main storyline can try all of the missions playing as the bad guys, and there's even a series of endurance challenge missions and visits by characters from some of the animated side-story films.

Dragon Ball Z combat has always been a tougher nut to crack than assembling a cast. The natural instinct of most developers has been to lean on the 2D fighting model, including the manga's earth-busting powers as background cinematic flourishes while maintaining the basic push-pull power dynamic familiar since Karate Champ. TBZ goes an entirely different way, presenting each and every battle as a group brawl. Not only is this truer to the source material, but hovering around expansive maps while using a lock-on mechanic to zip around projectiles and lunge in for attacks feels like a breath of fresh air.

This 3D movement model does have a few drawbacks, however. With all of a controller's directions and a couple of face buttons employed for navigation, there are only a limited number of attacks possible. Each character has just seven—a melee and projectile, powered-up versions of both, two special attacks, and an ultimate technique that can be used when their power bar reaches a certain level. This sounds restrictive, but TBZ's combat is about a constantly flowing skirmish of characters blasting at each other, closing in for punching, and then being kicked through buildings. It all works so beautifully that I never found myself wishing that the game would slice out one of its dimensions and start forcing me to memorize button/stick combinations.

There's one part of combat that's an egregious failure, though, and it's quite a pity, since it represented a fascinating experiment in game design. That element? The "Spirit Bomb".

A super-move from the manga, this technique has Goku (the series' main character) gather up well-wishes from all around the world, Tinkerbell-style, and use them to form an impossibly powerful sphere of energy to annihilate his opponent. The game's developers had a brilliant idea for how to realize this concept, too. At the end of missions, players are invited to fire their excess energy into a dimensional portal, creating a giant pool that other players draw from when using the Spirit Bomb. It sounds great in theory, but the execution leaves a lot to be desired.

The main problem is that this 'Spirit Bomb' is almost impossible to employ. In the first place, almost no characters have access to it. Secondly, it takes a very long time to power up. This is an issue because the fight does not stop while Goku is gathering energy from players around the world.

Every time I tried to use an ultimate technique, one of two things happened – if I was playing with CPU partners, their inability to guard would result in me being punched to death. If I was playing with human partners, they would just finish off my enemy, since ultimate techniques aren't useable until the very end of matches. By making the Spirit Bomb so hard to pull off, the game's developers have come up with a truly interesting gameplay dynamic that absolutely no one is using. The proof of this problem is visible on the game's main menu – the developers put a counter on the bottom of the screen to represent the power that fluctuates as players around the world feed in and draw out of the communal pool. Just weeks after the game came out, that counter was stuck at an endless series of nines – the natural result of almost no one ever bothering to even try an ultimate technique.

Another problem is that the game is almost perversely inaccessible to people who aren't already superfans of the series. Characters show up with no introduction as the plot skips from fight-to-fight; one moment robots are punching aliens next to a farmhouse, moments later the whole Z crew is in heaven, fighting the spirit of pure combat personified in the form of a fuschia-skinned child. As someone who's seen all of Dragon Ball Z, I understand how involved the continuity can get, and can roll with the game's shorthand. Players with limited familiarity will be excused for their confusion when, after finally defeating "Super Perfect Cell", the next mission asks them to anticlimactically fight Cell's original, weakest form.

Boiling the series down to nothing but the fights also makes plain the reality that the story and characters of Dragon Ball peaked with the Frieza storyline up until that point. Once the story moves into the 'Cell Game' however, closely following the manga's plot proves a detriment—players will find themselves slogging through battle after battle against the same couple of android characters before Cell shows up and zips through his repetitive transformations. Then things just get bad for the Buu 'Saga'. For practicality's sake the game's final foe has been stripped of his notable ability to absorb heroes and hybridize himself with their abilities. Without that and all the weird power permutations he's famous for cycling through, 'Buu' is basically the same guy three fights in a row, with only the slightest visual changes marking his second and third forms.

Whether playing through the story or engaging in 4×4 online skirmishes against other teams of players, The Battle of Z

perfectly captures the experience of fighting as a DBZ character. Not only can players punch enemies into the distance and then teleport behind them to kick them in the back, the end-of-mission reports actually grade them on how many times they pull that move off. As a fan of the series, TBZ is a welcome addition to the canon of games, with only one major flaw keeping me from wholeheartedly recommending it to anyone who's ever enjoyed Goku's adventures. It's just too bad the developers didn't offer even the smallest figleaf of a storyline; to anyone who isn't already desperate for the near-ultimate DBZ experience that the game offers, all of this must look like an ungodly confusing mess. Rating: 7.5 out of 10

Parents: According to the ESRB, this game contains cartoon violence, comic mischief, mild language, mild suggestive themes. You should fine with even their younger teens playing the game. The game goes out its way to keep its T rating. Despite being an encyclopedic representation of the manga's fights, the complete lack of a story means that the series' darker elements never have to happen. No one is ever killed in TBZ, let alone cut to pieces or disemboweled by particularly strong bursts of energy.

Deaf & Hard of Hearing: You should have no real trouble with the game. In addition to the enemy lock-on there's a mini-map to allow you to easily keep track of enemies. Yes, you'll miss out on the audio warnings some character give before letting out long-range attacks, but there's an easily-unlockable 'auto-block' bonus that you'll be able to use to minimize the problem of unfair off-camera attacks.

it sounds like DBZ switched to a Zone of the Enders style gameplay, can anybody who has played both say how they compare?