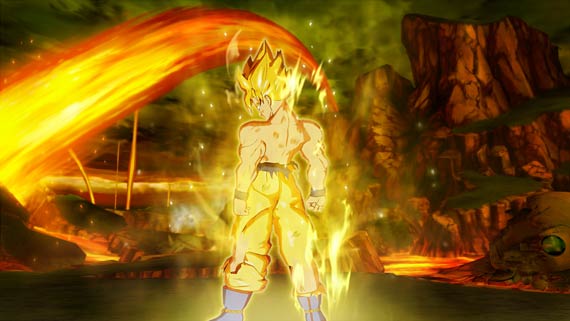 Oh, and the combat and graphics are better than ever before, also.

Dragon Ball Z: Burst Limit is the latest in a long line of games to attempt to recreate the anime series's garish, over the top fights within the context of a 2D, Street Fighter-style fighting game. It's questionable whether 1-on-1 fighting was ever the best way to depict those epic battles, but at this point 'Dragon Ball Fighting Game' is basically a genre of its own, so it's a little late to be criticizing the idea now.

I generally don't talk about graphics in video game reviews, both because the screenshots make it mostly unnecessary, and because graphics generally have little to nothing to do with a game's overall quality. Sure, good graphics are nice, but they're more representative of a game's budget than its value. Burst Limit is a special case, however, because its graphics can be judged quantitatively, based on how well they stand up to the show's animation. That's where the game startled me, because, as I began to play it, I realized that, to my eyes, it actually looked better than the show on which it was based. Perhaps it's different on the remastered DVDs, but speaking as someone who watched DBZ broadcast in syndication on a 23 inch television I was stunned by how good the game's characters looked. It still has the  weird disconnect that cell-shading creates in the viewer's mind ("Wait—it's a 2D image of a 3D model coloured so as to make it look 2D? Huh?"), and there's none of the low-tech charm of seeing the slight colour variations in characters from scene to scene or shot to shot, but this is the best depiction I've encountered of Goku and company. 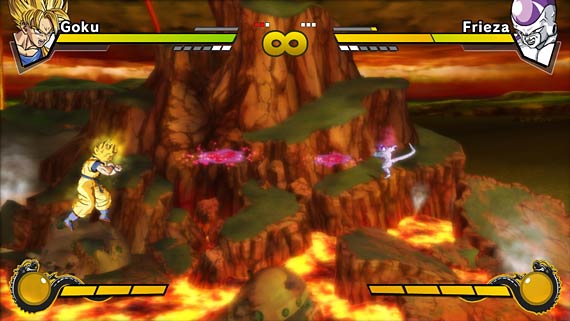 The fighting system is remarkably user-friendly, owing in no small part to the comprehensive training mode. Once a player has completed it, they're ready to control everyone—which is the one drawback of the game's fighting system. At times the accessibility crosses the line into simplicity. With just a few exceptions, every character's moves are performed using a common set of commands. This means that no matter which character the story asks the player to control, they'll be ready to jump waist-deep into the fighting. Of course, this is right in line with the audience's expectations: DBZ games shouldn't be about learning long series of key commands, they should be about firing Special Beam Cannons, with a minimum of preparation or fuss. That's not to say there isn't any strategy or complexity to the fights. In fact, there's a very satisfying dodge/counter system that enables the savvy player to escape all but the quickest attacks. Unlike most fighting games, DBZ doesn't raise an experience-based wall standing between players and enjoyment. After an hour of practice, the player will be able to use any character in the game, rather than just a single one, as in most other titles.

Speaking of characters, the game does a fairly good job of offering a wealth of fighters from the show's first three story arcs. As the story progresses, the player is allowed to play a majority of the fights from the series, giving them a chance to fight as or against nearly everyone from the show at one time or another. In fact, one of the cleverest design choices in the story mode is that the player always controls whoever won a particular fight in the series. A little restrictive, sure, but it's much more honest to have the player control Frieza and deliver a brutal beating to Krillin than the normal way this sort of thing is handled, where no matter how amazingly well a fight went for the player, the result is reversed in a quick cut-scene the moment it's over.

Despite the otherwise incredible amount of dedication put into recreating the cartoon, the roster of characters has some inexplicable gaps. It's disappointing enough that the game ends after the Cell Saga, robbing players of the chance to experience the horrors of Bu. The fact that a number of key fights and sequences have been left out of the storyline is just puzzling. I'm sure their absence won't mean much to any player looking to have a little fun with a simple fighting game, but for fans of the series, the absence of Zarbon and Dodoria might prove something close to a deal-breaker. Personally, I was heartbroken not to find Mister Satan anywhere in the game. 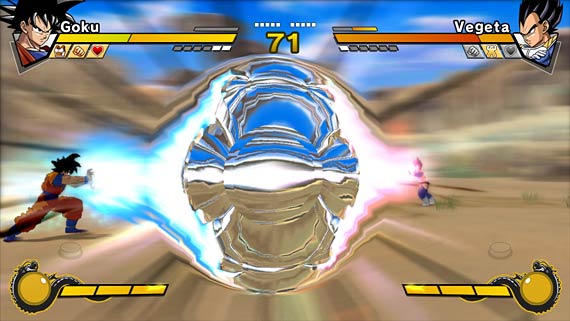 While there isn't any story to speak of between the fights—the game is so spare on presentation that each new level is chosen from a menu—it's more than made up for by just how much story is crammed into the fights themselves. In addition to opening and closing movies that set the scene, Burst Limit offers a new kind of mid-fight bonus/penalty system in the form of 'story pieces'. Whenever certain criteria are achieved during the fight a cut-scene will break into the action. One or both characters will yell about their power levels for a moment or two, and then the fight will resume, with one character having taken a little damage, or regained some health, or become immune to a certain kind of attack. While this stop-and-start gameplay might sound a little frustrating, it actually goes farther than any other single feature of the game to recreating the feel of the series, where no fight was ever so intense that it couldn't be broken up for a few seconds of conversation. The fact that these mid-fight cut-scenes have been tied to bonuses and penalties in the game rather than just being dropped in arbitrarily just makes the addition all the more seamless. The only complaint I can offer about the drama pieces is that the criteria for triggering them can be a little too obscure at times, and with the game offering no hint as to how they're supposed to be incited, players might find frustration if they try to unlock them all. Once I started to relax and just let them happen, though, I really began to appreciate how they play with the flow of combat.

Beyond its successes as a light, accessible fighting game, Burst Limit's greatest achievement as a DBZ fighting game is finally presenting the story and characters in all of their utterly ludicrous glory. By offering a full context for every fight and stated motivation for each character, the player has a much better grasp on the game they're playing, and a deeper connection to the world it's set in, even if they weren't already a fan of the series. The game presents a world where a father, upon traveling through time and encountering his adult son, reminisces about when they last saw each other, and the son was just a baby, "with a power level of one". Who could object to a game that could deliver such profound ludicrousness with such a straight face? Rating: 8 out of 10