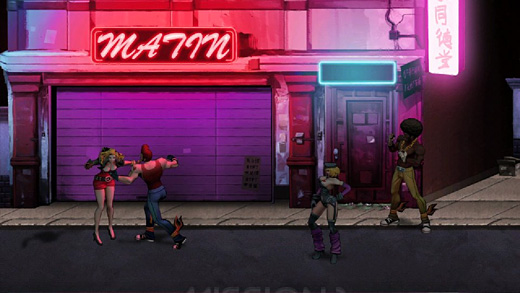 LOW Unskippable cutscenes in a game meant to be oft-replayed.

WTF A giant tank? Thank god I trained for this!

For such a trailblazing title, Double Dragon never made much of a mark as a franchise. While the original helped to define the 2.5D beat-em-up and featured a huge number of bold new innovations for the genre (Two-player co-op! Environmental attacks! Moving floors! Kick thrown weapons out of the air!) the characters never caught on with the public, and the series petered out after just five titles, a Neo-Geo fighting game and a crossover with the Battletoads.

Perhaps brutally killing off Marian at the beginning of the second game wasn't a great choice. That never happened to Princess Peach.

There hasn't been a new Double Dragon game since 1995, and the franchise was so poorly-managed that when the original arcade version came to Xbox Live a few years back, a crippling technical limitation was left intact: attempting to play Double Dragon co-op led to terrible framerate issues.

had their work cut out for them. What should the first Double Dragon game in 17 years look like? Since every gameplay element that Double Dragon pioneered is now a standard feature in the genre, what set Double Dragon apart from the rest enough that it deserved a remake? In what seems like a brilliantly audacious choice, the developers focused on the one thing that Double Dragon had going for it—one of the all-time great musical themes.

Neon isn't a remake of Double Dragon, it's an answer to the question "Could a game possibly be as awesome as Double Dragon's opening music?" The answer, astoundingly, is yes.

In sharp contrast to its predecessors, Neon is a broadly comic take on the 2.5D brawler. The Lee brothers have gone from stoic badasses to dudebro caricatures. The lead villain—once a random man with a machinegun—is Skullmageddon, a rock and roll lich-king who only gets around to explaining his motivation in a closing musical number that's worth playing the entire game just to hear. Marian, the love interest whose kidnapping kicks off the plot, remains unchanged, in that she still has no character to speak of.

The game consists of ten levels which start off with a fairly straight recreation of the original, then quickly take a left turn into the utterly bizarre. I'm not going to spoil any of the game's strange twists—but suffice it to say that the level and enemy design is based around an "everything but the kitchen sink" concept which would seem sloppy and desperate in a less entertaining and technically accomplished title (koff…Comic Jumper…koff), but here it just feels like the developers had so many great ideas that they couldn't bear to leave one out of the game. 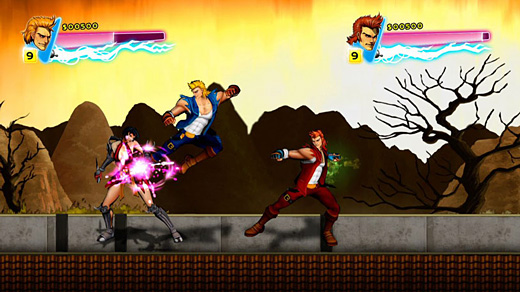 All of this design magnificence would be wasted if the gameplay wasn't there, so it's a good thing that Neon offers such tight and well-executed combat. The fighting system is surprisingly deep, with the basics—punching, kicking, jump attacks—being easy enough to use to carry the amateur players through most of the game. More advanced players will find a wealth of mechanics to explore and master. The depth comes from the game's key innovation—special moves and perks are awarded in the form of "mixtapes" that enemies drop when beaten up.

The tapes carry inside them either a stance (set of stat boosts or passive ability), or a special combat move. The player can have one stance and one move activated at any time, and much of the game's fun comes from experimenting with different combinations. Mix high defense with the ability to steal items and go loot farming! Turn on health absorb and hurricane kick to suck the life out of opponents! Max out the special attack bar then go nuts with the screen-clearing dragon attack! This huge variety of gameplay-altering moves and augments take what could have been a merely fun two-hour brawler and raise its replayability level an incredible amount.

There are two drawbacks to the mixtape system, however. The first is that it's not easy to switch between them. I recognize that the game wants players to pick a move and stick with it, but many of them are only useful in very specific situations, and it's kind of a hassle to pause the game and flip through a menu every time I want to knee-drop a stunned Abobo. The bigger issue, though, is how needlessly convoluted the system of leveling up mixtapes is.

Simply finding a new tape isn't enough—the player has to find ten tapes to level up each individual move. This wouldn't be so arduous if it weren't for the fact that the player can't just collect or buy all the tapes they want. No matter how many how many fireball tapes I came across, I won't be allowed to have more than ten unless I "upgrade" the tape at a Smithy. Unfortunately, the Smithy needs mithril to improve the tapes, and it can only be procured by beating bosses. Yes, levels can be easily replayed after being beaten, but after going through an entire level to kill a boss just so that I can go through another level to reach the Smithy, I'll have spent twenty minutes just to earn the right to go looking for more Dim Mak tapes. I'm not saying the game had to be dumbed-down to the point where enemies just drop a single currency that is used to unlock all the game's features, just that this whole process seems one or two steps more complicated than it needed to be.

While the developers may not have fully thought out the game's big new idea, that flaw doesn't overshadow everything incredibly solid about Double Dragon Neon

. Beautiful design work, humourous absurdity, legitimately great music, all working to support the great core gameplay. Neon is probably the best Double Dragon game yet, and it contains enough great elements it to warrant a sequel or two. Who knows? I wouldn't be surprised if this version of the franchise wound up outlasting the original. Rating: 8.5 out of 10.


Disclosures: This game was obtained via publisher and reviewed on the PS3. Approximately six hours of play were devoted to single-player modes (completed 2 times) and one hour of play in multiplayer modes.

Parents: According to the ESRB, this game contains suggestive themes, partial nudity, fantasy violence. The broad slapstick violence is impossible to take seriously, but they're not kidding around when they say "partial nudity". A few characters are so scandalously clad that it borders on M-rated territory. It's nothing that older teens can't have access to, but it is an issue worth noting.

Deaf & Hard of Hearing: While the game features no important audio cues that don't have visual accompaniment, it is a largely music-themed game. While you won't have ay trouble actually playing the game, you will be missing out on key parts of the content.

While I love a goo beat `em up I can’t help but wonder if a game like this does little more than tickle the fancy of gamers my age. How will today’s gamer ever get into a game like this one when it seems to be saying by its very visuals that its for an older generation? All of the 80s in jokes, the power glove–I’d hate to be a 15 who stumbled on this game and having to keep asking my mom and dad “what’s that supposed to be.”

Double Dragon has seen a number of iterations since 1995, including the spectacular Double Dragon Advance and multiple mobile editions (although two of those were takes on the original). There was also a fighting game sequel, Rage of the Dragons, back in 2002 for the Geo.

Great review otherwise, and I wish the game was receiving the credit it deserved in all circles. It’s fantastic work for beat-em-up lovers.