I Am The Weapon 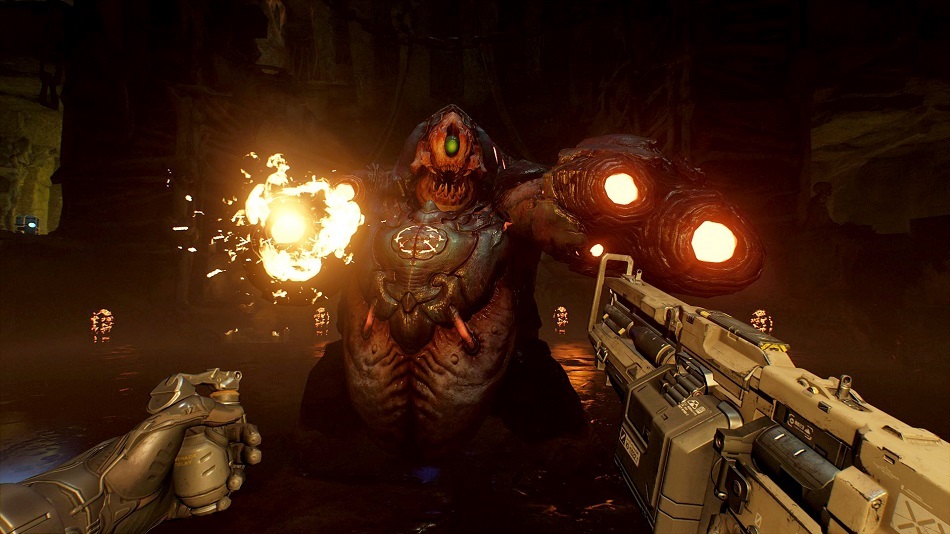 HIGH Watching a Mancubus’ spine flop around after leveling it with a particle beam.

LOW Trying to navigate levels with the Move controllers.

WTF Just ten original DOOM levels? Can you please sell me the rest?

As Bethesda proved just weeks ago with Skyrim, first-person games work better in VR. DOOM‘s Martian base looked incredible last year, with its mood lighting and claustrophobic blood-spattered corridors. It was a perfect environment to glide through, tearing demons limb from limb. Had I been asked, I couldn’t have offered an opinion on how to make it better. Then DOOM VFR allowed me to step inside that world, and after being just a few feet away from an obese monstrosity as my particle cannon tore it in half, I realized that I’d never actually played DOOM at all.

Taking place at the same time as DOOM, VFR puts players in the role of a scientist who gets killed by a demon, only to find his consciousness plugged into a combat chassis.This new second life gives him a chance to get some payback and help stop the demon invasion. The storyline is fairly simple – after the scientist has cleared out the command center, he’s presented with the clear goal of shutting down the demon gate. Don’t expect much beyond that — the game isn’t interested in narrative details.

The scientist’s work is accomplished by teleporting to various parts of the base (and eventually Hell, naturally) and flipping a switch or grabbing an item, and then ‘porting back to get the next assignment. The player will visit a set of familiar locations from DOOM, where the demons from the original game are now far bigger and more terrifying than when they were safely contained in a flat-screen television or computer monitor.

The stresses of rendering the game at 60FPS on two screens has taken a toll on the visuals, and scaled down the developers’ ambitions somewhat. Gone are the incredible lighting and particle effects, and most of the campaign is spent running through modest, relatively contained areas. These technical limitations don’t cause the developers to skimp on the enemies, though – each level features at least one locked-in arena battle where they’re swarmed with demons and have to fight for their life. They even manage to tweak the visuals enough to offer some truly expansive vistas in the final levels – the chains that hang in DOOM VFR‘s hell may have noticeably fewer polygons and there aren’t as many fonts spewing lava and blood, but the scale of the demonic palace is truly staggering. I found myself forced to pause for a moment after I’d finished slaughtering the area’s denizens to simply marvel at dire beauty of the location. 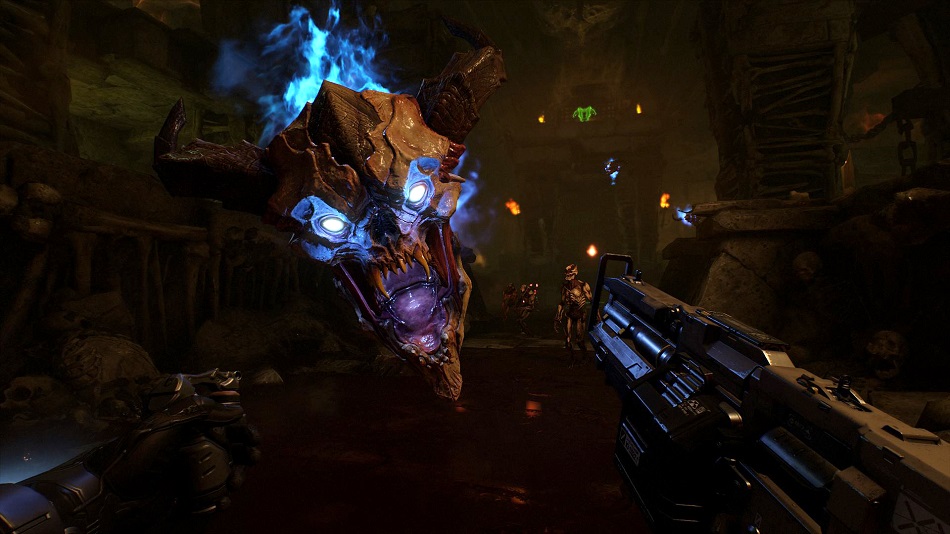 DOOM‘s playability is determined almost exclusively by which controller scheme the player is using. If they use the DS4 or Aim controller, it’s a perfect VR recreation of the main game. Players can zoom around the levels with a thumbstick, looking and shooting where they want, weakening enemies with gunfire before teleporting into them to reduce them to bloody gibs – it’s a move that replaces the ‘Glory Kills’ of the previous entry. Obviously the experience is better with the Aim controller since immersion is helped immeasurably by actually aiming and firing weapons, but both setups function perfectly well.

The Move controls, on the other hand, are a complete disaster. When designing the game, the developers found themselves in a bind. DOOM is all about quick action, requiring players to dodge enemy projectiles and dart quickly from side to side, taking on multiple enemies in quick succession. A teleport-based control scheme wasn’t going to cut it – it would be far too jarring to have to jump around the map after every shot or two. So, the developers assigned movement controls to the face buttons, letting the player slide forward, back, left and right. Unfortunately, this is where the trouble starts because there are only so many buttons on the Move controller, and allowing players to dodge strips away their ability to turn.

Insanely, players using the Move controllers can’t turn left or right. They have the ability to do a 180 turn, but that’s it. If the world had been built on a strict grid pattern like Wolfenstein 3D, this wouldn’t be a problem, but that’s just not the case. The Martian Base and hell are complex, multilevel structures, absolutely requiring the player to turn left and right to fully explore their depths and defend themselves. This control scheme was obviously not designed with the PSVR in mind. For all its strengths, the PSVR requires players to face forward for its tracking to work. Turning even sixty degrees to the left or right can cause serious problems, and DOOM requires them to do more than that all the time. Frankly, it’s nearly unplayable with the Move controllers.

Even with that one huge flaw, DOOM VFR is still an incredible experience. It perfectly captures the raw, brutal thrills of DOOM, and enhances them beyond what I’d imagined was possible. Actually blasting an Imp with a shotgun from five feet away is the kind of experience I’ve wanted a videogame to offer for more than twenty years, and DOOM VFR‘s depiction is even better than my dreams. Even with its small number of levels, visual downgrade and the lack of a chainsaw, this is the purest DOOM experience I’ve ever had, and I can’t wait to see what Bethesda has in store next. Rating: 8 out of 10

Disclosures: This game is developed and published by Bethesda. It is currently available on PSVR. This copy of the game was obtained via publisher and reviewed on the PSVR. Approximately 3 hours of play were devoted  to the single-player mode, and the game was completed.  There are no multiplayer modes.

Parents: According to the ESRB, this game is rated M and contains Blood and Gore, Intense Violence, and Strong Language.  It’s a DOOM game. There’s swearing and ultra-violence. Seriously, some of the biggest fun in this game comes from using huge cannons to punch giant bloody holes in demons. Of course kids shouldn’t be playing it.

Deaf & Hard of Hearing Gamers: I played a few levels with the sound off, and while I had more trouble keeping track of where demons were, there were no significant barriers to gameplay.  You may want to stick to lower difficulty levels, as surprise attacks by enemies can hit pretty hard. All directives are offered as text, and all dialogue is subtitled.

Remappable Controls: No, the game’s controls are not remappable.