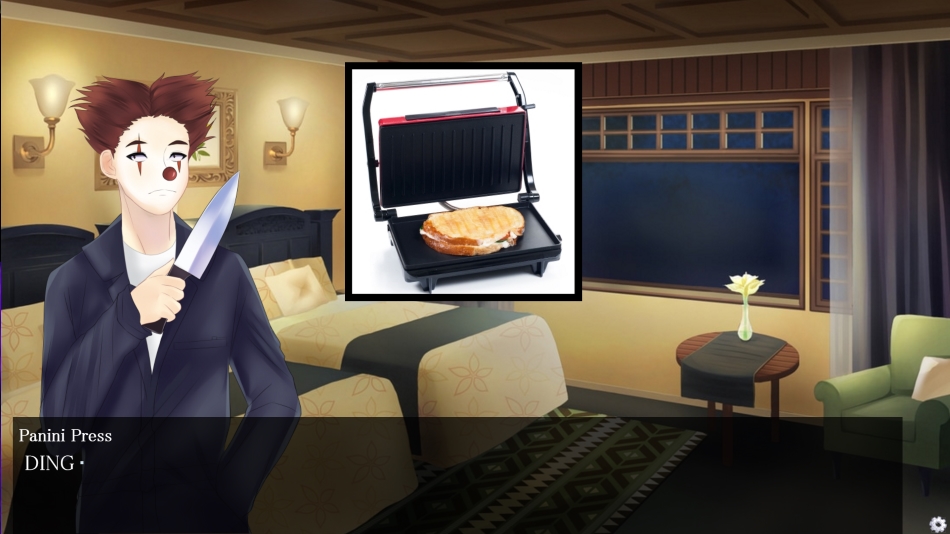 This isn’t a normal preview, since it’s not really fair to write a preview of your own project. So instead, I’m announcing my upcoming game/criticism project, the Visual Novel Don’t Run Away!

DRA is the story of five friends who spend a weekend at a cabin in the woods and find themselves menaced by a mysterious and malevolent force… A Clown with a knife! More importantly, it’s an attempt at ‘criticism via creation’, in that the game is a reaction to another game — a game so terrible that, rather than simply write a review or extended criticism of it, I have endeavored to make my own game which exists primarily to reflect and comment on its failures.

Naturally it’s difficult to announce something when you don’t have anything to show, so I’ve produced this teaser for the game, a mini VN that takes place before the main game and introduces players to the world of Don’t Run Away.

With numerous decision points and multiple endings, this VN should give you a sense of the kind of thing you can expect in the main game and give you a chance to meet the game’s antagonist, the Evil Clown Who Kills People In The Woods! Check out the game by following this link to itch.io, where you can play it in a browser or download it to your PC!

The game takes about 5-10 minutes to play. If you’d like to see multiple endings, be sure to save – the save menu can be found on the options screen by clicking on the gear at the bottom-right of the screen. Reload and check out the different story branches!

I hope you enjoy the game, and you can check back here for updates about Don’t Run Away‘s progress!