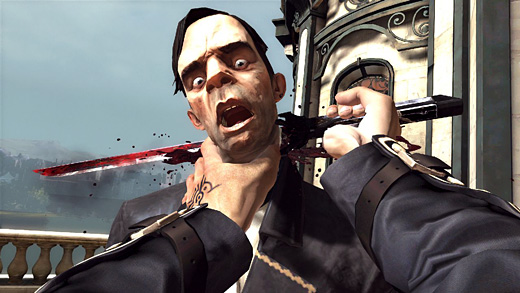 HIGH 'Porting in, stabbing a guard in the back, then porting out before his partner has any idea what happened.

LOW Why does level seven refuse to end?

WTF Rat summoning? What does that—AAAAAAAH!

didn't feature brilliant level design, a thrilling storyline, and a stunningly-realized fantasy world, the core gameplay mechanics are such a pleasure that it would still be one of the most enjoyable games of the year. The fact that it uses those mechanics to allow the player to take part in a simple yet gripping revenge tale, choosing their own way to explore and interact with the beautiful city of Dunwall raises Dishonored from being a mere mashup of Thief and Hitman (which is already a great idea) to being one of the best games of the year.

A first-person stealth title, Dishonored casts its player as a magic-using ninja tasked with avenging the death of an Empress and ensuring that the rightful heir takes her place on the throne. This is accomplished through the surgical removal of all the treacherous usurper's allies in the government and society, by whatever means the player chooses to employ. Dishonored's story is one of its strongest points, for while it follows a relatively simple template (the main character, Corvo, isn't anything close to an anti-hero), real work has been put into developing the characters and their motivations. Everyone has a distinct personality and has reasons for the decisions they make beyond just being the "good guy" or "bad guy," and that makes the plot all the more enthralling.

The game is broken up into nine missions in which the player is ferried to a location and instructed to kill a key figure. Beyond establishing a goal, the game offers little more than advice for how obstacles should be overcome—the player has access to such a huge array of powers, and the levels themselves are so intricately designed, that options seem limitless. A wall is blocked off by an energy field? The player can use platforming and a teleport skill to slip over it, kill/knock out its guards and then disconnect its power supply—or just possess a rat and slip through a crack in the wall. There are so many powers and so many possible ways to use them that the game isn't just replayable, the levels essentially stand up and demand to be replayed.

Each level has a distinct feel and unique architecture—the monolithic prison, ornate mansion, or crumbling slums all offer their own charms while being fundamentally believable as practical locations. Any of them can be traversed in just a few minutes, and players making a beeline straight for their target will find the game incredibly short. For players who want to explore, however, there are ample rewards: money and weapons hidden away in secret caches, sub-missions to take on and resolve, even safes to crack. While zipping through the game in just a few hours is possible, every level is so rich and layered that players could spend hours sneaking around them without ever getting bored. 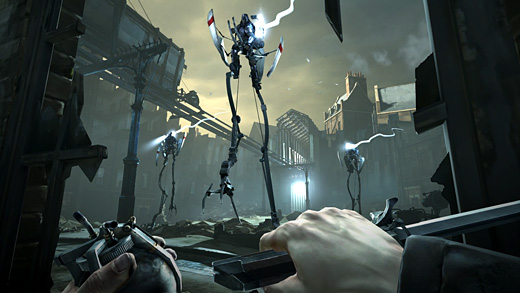 In fact, of the nine levels featured, only one is a disappointment. It's not a failure of design, though. For plot reasons, the player will find themselves hunted by assassins and "zombies" through a set of narrow urban canyons. While this gameplay is an interesting change of pace, it's too different from the rest of the game and goes on for far too long. It's an odd choice to make the one-off level the longest one in the game, and the gamble isn't successful.

In addition to deciding how they want to make their way through each level, the player gets to choose exactly how bloody they want their travels to be. This choice is complicated by one of the richest consequence systems I've come across in a game. Rather than pedestrian good/bad points being awarded that lead to a better or worse ending, the way levels are played has a clear effect on the rest of the game. To put it simply—killing people makes individual moments easier, while playing non-lethally makes the overall game easier.

Knocking people out requires the player either use one of a limited number of sleep darts, or to sneak up behind a lone opponent and put them in a choke hold. It's challenging, to say the least. Murder, on the other hand, is frighteningly easy. Not only is there an effective combat system that allows players to parry, counter, and use a gun (all at once) to eliminate their foes, but any unaware enemy can be executed with a single swipe of the sword. Don't want to go to the trouble of sneaking around a sentry? Just teleport right in front of him and slash his throat before he even has time to process what's happening.

The game's real genius in this respect is the elegant and completely logical way it ties the player's choices to the plot: the city of Dunwall is quarantined due to a rat-borne plague. As the player slaughters guards, not only are they putting everyone else on edge (as the presence of a masked assassin tends to), but they're creating more corpses for the rats to feed on. More food means more rats, which spreads the plague further and faster, destabilizing the city. It might be convenient and viscerally satisfying to kill everyone standing in the way of the new Empress' coronation, but an empire built atop the corpses may wind up not being one worth ruling.

Whether it's the fantastic art design, seemingly endless gameplay options, or incredible urban exploration, Dishonored has everything players could want from an action title. Over the course of the game players will get just a few glimpses of the huge world that the developers have created—a singular Victorian archipelago where whaling is the main industry and source of futuristic energy, where a fascistic church and its secret police try to destroy all evidence of magic, and where political maneuvering is every bit as vital as the force of arms.

Not only is Dishonored

a strong game set in a fascinating universe, it's one of those rare and incredible titles that holds the player's attention right from the start and then leaves them wanting more as the credits roll. If there's a better action game in 2012, I'll be very, very surprised. Rating: 9.5 out of 10.


Disclosures: This game was obtained via publisher and reviewed on the PS3. Approximately 12 hours of play were devoted to single-player modes, and the game was completed. There are no multiplayer modes.

Parents: According to the ESRB, this game contains blood and gore, intense violence, sexual themes, strong language.  As good as the game may be, your children and younger teens shouldn't be playing it. In addition to the extreme violence (and frequent, disturbingly realistic beheadings) there's omnipresent references to smoking, drug use, and drinking. That's not even mentioning the level set in a brothel.

Deaf & Hard of Hearing: It's kind of a mixed bag—dialogue is subtitled, and plot is mostly delivered through text document. Listening for the movement of unseen opponents is an important element in gameplay, but there is an upgrade that allows players to supernaturally view enemies at all times, so once you've unlocked that you should be fine.

Agreed. If a real stealth game like Thief were to be released these days it would blow any stealth game made since out of the water. Modern games are nothing but pale imitations of classic games with shiny new facelifts and some gimmicks added.

I pretty much agree. A shame most games these days are held back for the console market… And that is what handicapped it, Bioshock and just about every other supposedly 8+ title…

Tho all in all I like it more than Bioshock that one burnt me bad.

9.5???? This game doesn’t deserve more than 6-7… And while 2012 isn’t a good year for games in general, there is no way this game is one of the best… It is a boring short fps, with the illusion of stealth. If you play aggresively it is so easy a newborn can finish it… If you play with the so-called stealth(with the dumb AI that forgets about you in an instant and light that doesn’t matter) it is really boring… Graphics are mediocre, plot is the same, what is so exceptional about it? And it isn’t just you, this game… Read more »

Glad I am not the only one to think the level design is a bit underwhelming.

Its a good game, better than Bioshock but gaaa its so held down by modern designs….

Glad that you guys reviewed this game. I thought it was just getting a lot of undeserved love like all of the surprise triple A titles do. But from what you’re writing this game is right up my alley.

The one knock is that you can run through the game and beat it quickly. I’ve always wondered how a game designer would allow the player to side-step everything from the beginning without first showing/forcing players to explore a bit at key points of the game.