Back to the Wall 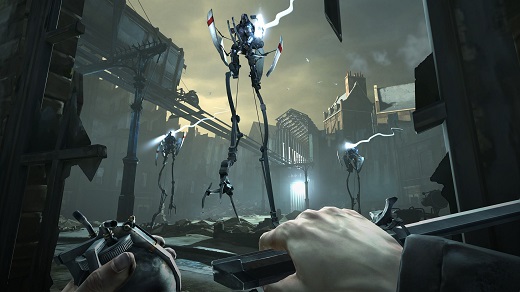 HIGH The finale of the Brigmore Witches.

LOW Who thought including a trapshooting challenge was a good idea?

WTF Now that I can read the posters and wall signs, I'm troubled by the amount of dogfighting going on.

When I originally reviewed Dishonored, I called it one of the best games of the year and described it as a perfect midpoint between Thief and Hitman. Now that the Definitive Edition is here, everything I said in that review is still true. Dishonored remains an incredible experience from beginning to end which I would recommend to anyone without reservation. What really impresses about it, though, is that in the three years since it was released, both Hitman and Thief have released new installments, and neither managed to snatch the stealth or assassination crown away.

This new iteration of Dishonored brings the game to next-generation consoles, putting the core experience and all three pieces of its DLC in a convenient, budget-price package. The technical upgrades don't impress much—since the devs were was never attempting photorealistic graphics, the move to higher texture resolutions is a marginal improvement at best. The smoother framerates during large fight scenes are hugely appreciated, but beyond that it's essentially the same game with just a little more detail.

While the visuals aren't a huge deal, it is nice having all of the DLC readily available. Although the Dunwall City Trials still feel like filler, the other two pieces of DLC ask players to take on the role of supernatural assassin Daud. These do a fantastic job of making up for complaints that the main campaign was on the short side.

With each of Daud's add-ons featuring multiple missions that are as replayable as anything in Dishonored proper, the Definitive Edition offers players twice the content of the original release, jam-packed with incredible level design and stellar environmental storytelling. Dunwall remains one of the best-conceived and executed video game worlds in recent memory, and anyone who played the original Dishonored but missed out on the expanded content should look on this as a perfect opportunity to go back and rediscover a beautiful and terrifying world.

Dishonored was an incredible accomplishment—a game that offered stylish murder and great storytelling in equal measure. It accomplished everything that it set out to do and made it look easy, while games all around it failed to impress. Three years later, nothing in its genre has come close. Rating: 9.5 out of 10


Disclosures: This game was obtained via publisher and reviewed on the PS4. Approximately 25 hours of play were devoted to single-player modes, and the game was completed.

Parents: According to the ESRB, this game contains blood and gore, intense violence, sexual themes, strong language. Okay, one caveat to the everyone should play this game thing: Dishonored is hyper violent, full of brutal executions setting people on fire and sacrificing the weak to dark gods. Then there's the drugs, drinking, and prostitution. So take the warning seriously and restrict this to 17+ players. Anyone over 17, though, will absolutely find this worthwhile.

Deaf & Hard of Hearing: It's kind of a mixed bag—dialogue is subtitled, and plot is mostly delivered through text document. Listening for the movement of unseen opponents is an important element in gameplay, but there is an upgrade that allows players to supernaturally view enemies at all times, so once you've unlocked that you should be fine.