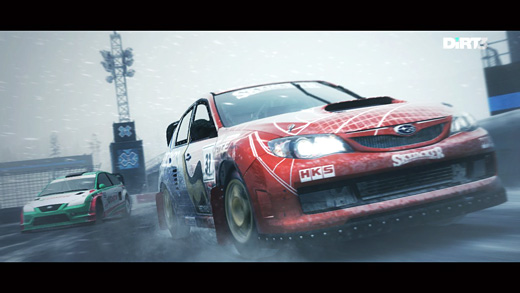 HIGH Racing through the dusty African night, drifting around corners at full speed.

I don't envy developers working on realistic driving games. They're in the unenviable position of catering to the fantasies of those who imagine themselves driving some of the world's most powerful automobiles in professional competition, while always remaining aware of the fact that many, if not most, of those same people lack the hand eye coordination and focus necessary to accomplish such a task. Verisimilitude is the brand of these games, yet actual race driving is a stressful, draining activity. The trick is to give players exactly as much realism as they want, while making everyone feel as if they're speeding down a dirt road through a thick European forest. Dirt 3

accomplishes this quite well by offering an unparalleled level of scalability in its difficulty, allowing even the most accident prone motorists to feel like a race champion.

Set in the world of rally car racing, Dirt 3 pits boxy, yet deceptively fast cars against one another in various events and even something called gymkhana; apparently it's the proper name of an event where players are asked to win points by getting air or drifting in a circle around piles of debris. Okay. A wealth of automobiles are unlocked over the course of the game, and each one has the option of being tuned to affect gear ratios, breaking, and aerodynamics. There's nothing close to the variety of options offered by any of the Gran Turismo games, but there's still plenty here for tuners to busy themselves with.

Also generous, Dirt's tracks go above and beyond what players expect. Rather than simply building twelve routes for point-to-point races and calling it a day, the developers have taken a page from open world racing games like Need for Speed and created a few huge, sprawling areas with a latticework of roads intersecting through them. The developers then simply block off a few turns and create a dozen different routes on each map. The end result is that while players might get used to seeing a familiar turn or small hamlet, each new point-to-point race offers a unique course to enjoy. It's such a great experience that I was annoyed every time I was going to be forced to do a lap race, since that meant having to loop around the same plot of land over and over again—but thankfully, those are relatively rare occurrences. 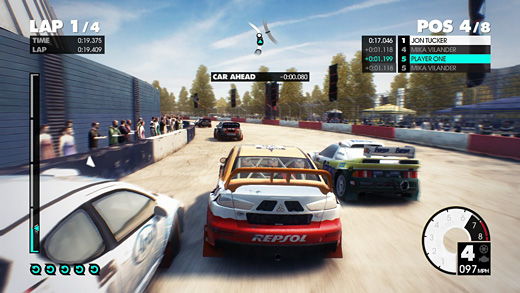 The tracks and cars are great, but the thing that really elevates Dirt 3 to being a widely-accessible racing game is the scalable difficulty. Hard-core players can turn off everything and encounter an authentic driving experience by placing the camera inside the cab of the automobile, forcing them to deal with the limited field of vision and weather conditions actual rally drivers have to overcome. For players willing to pull the camera back, there are a huge number of options designed to keep things from ever getting too daunting.

From simple things like assisting with correct drifting technique, to putting a colored strip on the ground that lets players know the proper racing line and speed, players can employ the help modes as training wheels to help them get used to the rules of the road, or simply to make sure that things never get too strenuous. For players who just want to enjoy the scenery and the feeling of blasting past their opposition with no trouble at all, the game even offers an easy mode in which the computer takes care of all necessary speed adjustments—simply hold down the gas for the entire race, and the car will decide what speed the player should be going at any given moment. All the player is asked to do in this mode is make the turns at the right time and try not to accidentally run into any of the dozens of cars they will inevitably be passing.

The game's multiplayer modes are also a fairly impressive accomplishment. In addition to letting the players race and gymkhana against one another, Dirt 3 cuts loose in its myriad tag and capture the flag modes, all of which are set in a dilapidated British dockyard. After all the bareknuckle competitive racing, it can be nice to stretch driving muscles by chasing or being chased through the abandoned construction site. None of the single player driving assistance is available in these modes, but the whole thing is so low pressure it shouldn't really matter—demolition derbies are only marginally more fun for the winner than they are the loser, after all.

Dirt 3 is a great experience overall, but unfortunately, the developers dropped the ball with the "duels" that end every tournament in the singleplayer mode—the idea is that players race head-to-head against an opponent on a track that loops back around on itself. Nothing wrong with that except that the player is asked to do this to dozens of times over the course of the game, and there are only three tracks. For a game that seems to pride itself on constantly giving the players something new in every other aspect, to expect them to spend forty-five minutes driving around the same loop on the Riviera is a little insulting. Still, this misstep doesn't do much to harm the package.

raises the bar for accessibility in a realistic driving simulator. With dozens of unique tracks, cars, and multiplayer games it offers and harassment of content without ever feeling overwhelming. By their very nature racing games are was going to be a little repetitive but Dirt 3 has almost completely succeeded in removing frustration from the mix. Rating: 9.0 out of 10.

Parents: According to the ESRB, this game contains lyrics. You should find this game almost completely harmless. As noted above, the only thing objectionable are a few lyrics in some of the songs played. As someone who turns off the music in racing games, I never even noticed the problem.

Deaf & Hard of Hearing: You won't find yourselves hampered by any audio cues—this is racing at its most basic and accessible, and that includes operating solely on the basis of visual information.