Saddle Up Them Dinos! 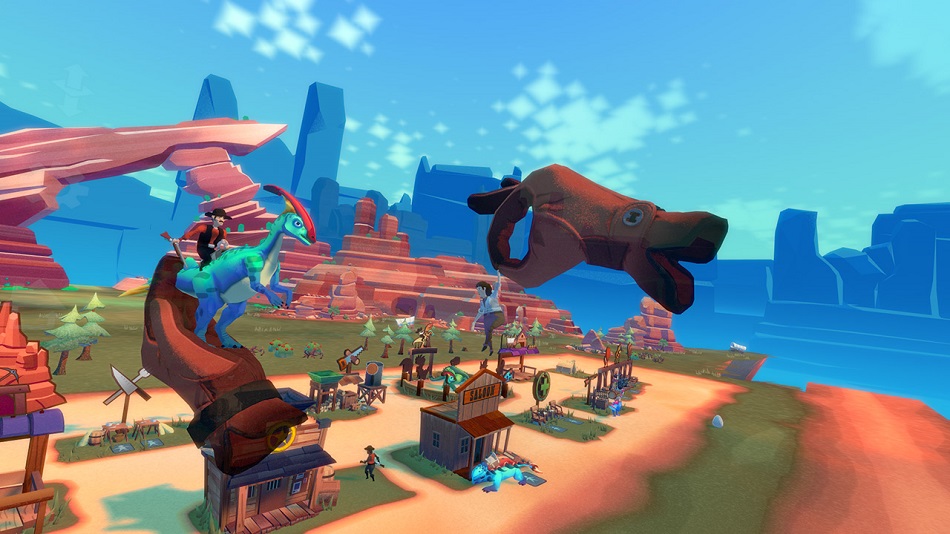 HIGH What happens to the Bandit King at the end of his boss fight.

After they managed to bring the point-and-click adventure into virtual reality with the delightful Wayward Sky, I was expecting big things from Uber Entertainment’s next PSVR title, and Dino Frontier doesn’t disappoint.

A town-building god game with some RTS and tower defense elements, Dino Frontier puts players in the role of ‘Big Mayor’, a floating set of hands that help a group of settlers tame the wild west, teaching them how to deal with both the dinosaurs and bandits who are determined to ruin their manifest destiny.

The game is played with two move controllers, and it’s incredibly intuitive. Players look down on a diorama of a western valley — the land for the town is set out in front of them, with a set of caves and waterfalls stretching out beyond. Settlers have to venture out where the dinosaurs roam to gather food and building resources, with the player guiding them by picking them up and dropping them when they’re needed.

While this literal hands-on approach may not work on a large-scale military RTS, it’s perfect for the more immediate world of Dino Frontier. By simply pushing their hands together or pulling them apart, players can zoom to the point where dinosaurs fill their entire field of vision, or pull back until every living thing is just a moving speck in their god’s eye view. The tutorial turned me into an expert in just five minutes, and I can safely say that this tactile-focused experience is the best control scheme I’ve ever encountered in a strategy game. I found it hard not to chuckle with delight as I picked settlers up and tossed them across the map to help with a fight or chop down some trees.

Gameplay is about building up the town until it’s strong enough for the player to challenge the bandit king who’s been bedeviling the area. This is accomplished through simple resource management. Even without direction, settlers will chop down trees, gather fruit, and refine both into usable resources, but the player can always just grab one and redirect their efforts as necessary. The player’s main responsibility is choosing which building to construct next, and helping to manage combat. 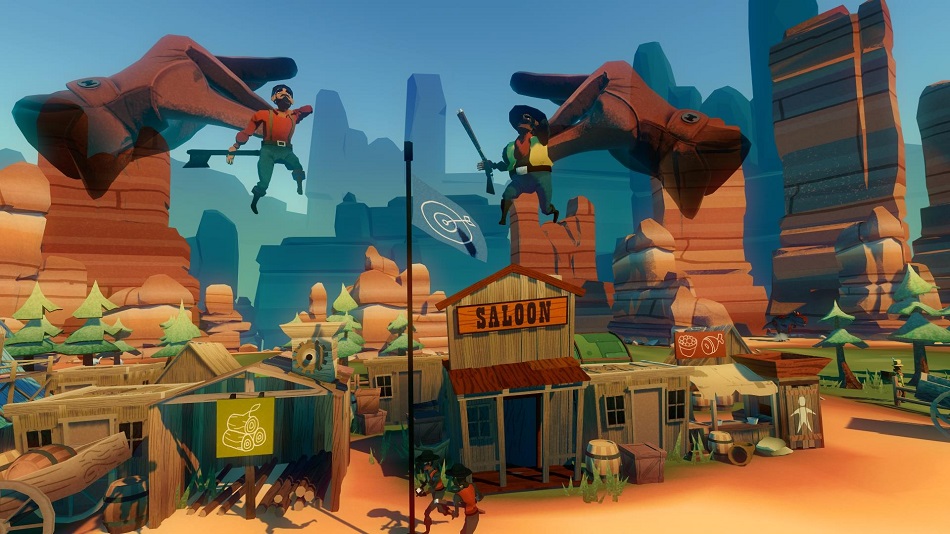 The combat system is one of the most charming elements. Place settlers near wild dinosaurs and they’ll automatically attack. Players can watch or involve themselves by grabbing settlers as they’re being attacked, protecting them from damage while the other attackers keep damaging the dinos. This is especially important when trying to capture ‘alpha’ dinosaurs that players can train to help with tasks around town. Each alpha dino has a special attack that can quickly knock settlers out, but before they do, a red marker appears where they’re going to strike. It’s up to the player to quickly grab the endangered victim and move them out of range — a great way to feel involved in what would otherwise be fairly basic, numbers-based combat.

The dinos themselves provide meaningful bonuses in the town-building area of the game. The more peaceful saurians can gather wood and water plants, automating the little details so the player can focus on other things — for example, Raptors and T-Rexes can be tossed into a field next to grazing dinosaurs, and the player can be secure in the knowledge that they’ll quickly reduce their prey into a pile of meat to be processed into food. There are even passive buff dinosaurs, which follow townspeople around, generally improving their mood by being adorable.

While Dino Frontier only takes around three hours to complete, there’s a decent amount of content. The town has a wide variety of buildings to upgrade, and each of the nine trainable dinosaurs has a concrete purpose that affects gameplay in interesting ways. In addition to the main town-building area, players have access to a farm they can visit to gather extra resources, as well as a mine which contains a tower defense minigame.

In this side activity, players have to assign some settlers to mine the ore and gold they’ll need for high-end buildings while others man the turrets that keep bandits and hungry dinosaurs at bay. It’s a cute little mode with twenty waves of foes and three different upgradeable stations, and it makes a fantastic case for how well tower defense games can work in VR since the player is able to manage troops and emplacements far more quickly and naturally with hands than they can with a mouse or controller.

Dino Frontier‘s only real problem? There’s just not enough of it. It features adorable characters, accessible gameplay, collectibles to find, even a thrilling boss fight to cap things off. As the credits rolled, however, I couldn’t help but wish there was a little more to it. A second town to build, more tower defense maps, tech trees to develop my settlers and dinos further… this is such a wonderful world I wanted to spend more than three hours in it.

Although Wayward Sky wasn’t much longer, it felt like a complete experience with a beginning, middle, and end. As charming as Dino Frontier is, it feels like a proof of concept – the developers clearly show that this genre mashup not only works in VR, but is massively improved by it. I can only hope their next project is a little meatier. Rating: 9 out of 10

Disclosures: This game is developed and published by Uber Entertainment. It is currently available on PSVR. This copy of the game was obtained via publisher and reviewed on the PSVR. Approximately 4 hours of play were devoted to the single-player mode, and the game was completed. There are no multiplayer modes.

Parents: According to the ESRB, this game is rated T and contains Violence. This is a mostly harmless experience, acceptable for even younger teens. Settlers and dinos can die, but it’s neither graphic nor treated as especially traumatic. Animals are killed for meat, and settlers recharge their happiness meter by spending time at a saloon, although drinking is never specifically mentioned.

Deaf & Hard of Hearing Gamers: There are music cues that pop up whenever settlers or friendly dinos are in danger — you’ll have to pay close attention to all of your troops without them. All dialogue has subtitles, so you shouldn’t have any trouble getting all of the game’s instructions.