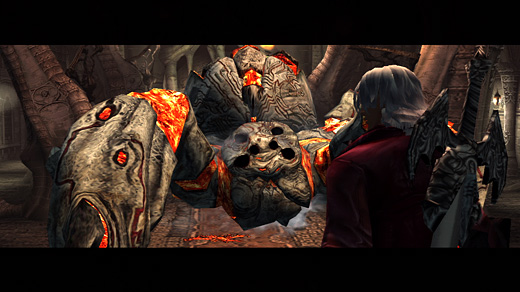 Reviewing a compilation can be a challenge, especially when dealing with games as relatively fresh as the Devil May Cry (DMC) series. When poring over a collection of Genesis classics, there's any number of things to be said about ephemerality and the elasticity of childhood memories. By comparison, DMC isn't old enough to be nostalgic about. GameCritics.com covered all of these games when they were originally released and I personally covered Devil May Cry 4, so an authoritative position on the games has already been offered—it would seem that all that's left for me to do is talk about the package and graphical updates…

…Which brings me to the stunning disappointment that is DMC. I don't know if it's a case of high-resolution textures not being available or the developers not being willing to put in the effort, but while all of the character models are crisp and high-resolution, a shockingly high number of the backgrounds are badly blurred. Even worse are the game's cut-scenes—absolutely no effort was made to modernize or update them, which creates a strangely discordant effect.

Dante looks great fighting a nicely-rendered, if somewhat angular, lava spidion, but the second the killing blow is landed, the game switches over to a blocky, out-of-focus mess as a cut-scene tells the rest of the story. Add to this the fact that the subtitles flat-out don't work, and the first game in the set is just a complete failure of a port.

Devil May Cry 2 fares much better than its predecessor, although that's largely because of decisions made at the beginning of the century. Since all of the game's cut-scenes are created in-engine, there's never any graphical shock. Likewise, the textures are consistent across the entire length of the title, creating a pleasing, coherent look. My personal favorite DMC game, DMC2 drew a lot of flak on its original release due to its dialed-down difficulty and vastly different setting. I would argue that it's aged well, though. The more linear maps and simplified gameplay make it the most accessible title in the franchise, and its story is—by a wide margin—the most coherent the series ever offered. 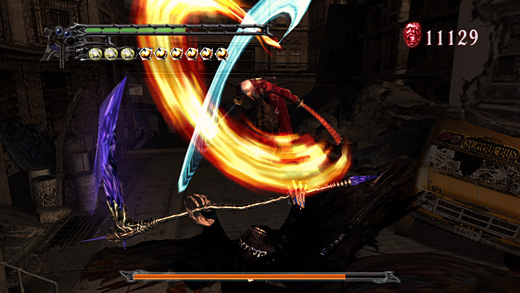 Devil May Cry 3 is a mixed bag.

It's obviously the most visually accomplished of the three titles—no surprise there, as it was released in 2005, and designed to be played on large televisions with component inputs. Even the game's pre-rendered cut-scenes aren't as offensively blurry as DMC's were. While playing it, though, I realized just what a missed opportunity this special edition represents.

In addition to the high-octane gunplay and swordfighting, the DMC series is known for having the least effective maps in video game history. As if the fixed cameras weren't confusing enough, the game's refusal to put Dante's current position on the map makes navigation nearly impossible. Add to that the fact that it's often unclear exactly where the player is supposed to go or what they're supposed to do when they arrive, and it reaches a point where the game seems to be toying with its player for sheer sadistic pleasure. Maybe it would have been logistically difficult, but this HD collection would have been a perfect opportunity to place clear objective and location markers on its maps, fixing one of the series's biggest problems.

The Devil May Cry HD collection is a bizarre animal. The least-loved game in the series benefits most from the move into high-definition, while the other two suffer from graphical hiccups that will no doubt frustrate the perfectionists who pursue the punishingly precise action that those games offer. The collection doesn't offer much in the way of special content to sweeten the deal, either. In addition to the bonuses offered by the original games, there's a small gallery, which features everything from behind-the-scenes visuals to fanart of questionable quality.

This collection is an easy recommendation for fans of the series, who will find it every bit as playable as (and far more attractive than) the PlayStation 2 versions—but it doesn't feel like a definitive edition of the games, and with its near-complete lack of a manual and insufficient in-game tutorials, it makes no effort to ease players unfamiliar with the franchise into the DMC world. Although, given the series' obsession with the culture of "cool," I doubt being accessible to as few people as possible will count as a failure. Rating: 6.0 out of 10. (Rating is representative of the compilation's success, as opposed to the artistic merit of each individual game.)


Disclosures: This game was obtained via publisher and reviewed on the Xbox 360. Approximately 15 hours of play were devoted to single-player modes (completed 1 time each).

Parents: According to the ESRB, this game contains blood, suggestive themes, violence. By no means should you let your children near these games. One of Capcom's first titles to feature the "extreme graphic violence" warning as a loading screen, Devil May Cry set the series's tone for excessive and omnipresent brutality, which would continue for the rest of the games. There's salaciousness and alcohol to boot, not to mention the frequent themes of parents sacrificing their children in exchange for power. So keep them clear.

Deaf & Hard of Hearing: There are going to be problems with this game. In addition to the bizarre lack of subtitles for anyone who isn't monstrous, there's the fact that audio cues are vitally important for identifying when an off-camera enemy is about to lunge at Dante, claws outstretched. Which is most of the time.

What? DMC 2 was generic and bad, it had slight better level design but not by much. DMC is much better. DMC 3 is well…. a capcom game…LOL I think the real WTF will be the new DMC ><