Night Has Come And So Have I 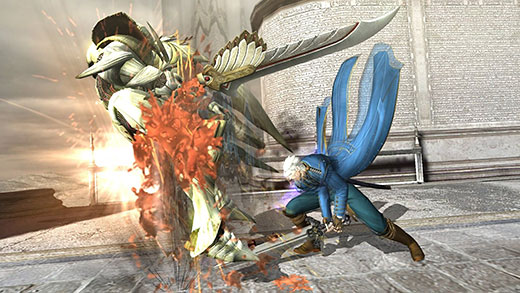 HIGH Slicing through an entire room of monsters with a single swipe of Vergil's blade.

LOW Many, many deaths caused by foes swooping in from off-camera.

WTF How did anyone ever sign off on Lady and Trish's costumes?

Devil May Cry 4 is an odd game to resurrect, for a few reasons.

To start with, as the terminus of the original DMC series, it offered a certain amount of closure to the franchise. Things were blatantly left open for a sequel, but main character Dante making peace with Nero (the reincarnation of his troubled brother) was a natural stopping point, and I didn't see that there was much more to be done with Dante as a character. More importantly, the coherence and design excellence in Ninja Theory's DmC reboot makes the previous Capcom-developed games seem creaky and outdated. In light of these factors, it's hard to see the revamped version of DMC4 as anything other than a cash grab, and little about the presentation does anything to dispel this notion.

While the upgraded graphics and vastly improved framerate are a delight, these technical fixes represent the only major changes made to the game—DMC4's many flaws have been lovingly preserved. Chief among these is the game's strange fixation with static, too-close camera angles.

This cramped viewpoint had been a hallmark of the series until DmC burned everything down and rebuilt it as the properly-framed brawler it always should have been. I'd held out some hope that a similar rescue would be performed on DMC4, allowing players to enjoy its engagingly frenetic combat without fear that suddenly the camera would get trapped behind a wall or a tall enemy, but it wasn't done. The failure of the developers to improve this part of the game feels lazy, and is likely to engender contempt in the audience, rather than gratitude for the misguided preservation.

This special edition isn't a disaster, though—the inclusion of extra playable characters does liven things up. The option to play through the campaign as Vergil or splitting it between Trish and Lady definitely lives up to expectations. Each one has a fully-realized moveset and arsenal of weapons, all requiring players to learn completely new strategies. Fair warning, the extra characters don't have storylines, and their entire plot is exchanged for the starting and ending FMV. That said, the game's original script wasn't much to speak of, so it's not a huge loss.

Also in the ‘plus' column, the new Legendary Dark Knight mode adds a Musou-scale quantities of enemies into each combat encounter. It's as refreshing as the new characters since it leverages the already-solid combat into an openly brawl-intensive context where it feels far more appropriate. However, even with the new characters and mode, DMC4: Special Edition can't help but feel irrelevant.

Putting the meager improvements aside, this wasn't a special or beloved game in its original iteration, and its flaws aren't excusable since it wasn't originally published that long ago. As a point of reference, God of War was already three years old by the time DMC4 came out, and anyone could see that its design was a better way to handle brawlers. It took the DMC series another five years and a new developer to get the message, leaving this rerelease as little more than a time capsule giving players a glimpse into a series that stubbornly refused to improve along with its competition. Rating: 5.5 out of 10


Disclosures: This game was obtained via publisher and reviewed on the Xbox One. Approximately 25 hours of play was devoted to single-player modes, and the game was completed.

Parents: According to the ESRB, this game contains blood, language, sexual themes, violence. You should steer younger children wide of this one. Not just because of the epic amounts of incredibly bloody violence, or the scandalously revealing clothes that the female characters wear—it's appropriate for older teens. Be careful of the unbelievably high level of difficulty, though. 2013's DmC was immensely player-friendly, and if your teens are curious to try this one hoping for more of the same high-octane brawling, they may find themselves throwing controllers in frustration. It's that hard.

Deaf & Hard of Hearing: You're going to be having trouble with this one. Restrictive camera angles ensure that half the time enemies will be attacking from offscreen. Occasional audio cues are the only hope of detecting them, and there's nothing to replace those. The meager plot is subtitled.