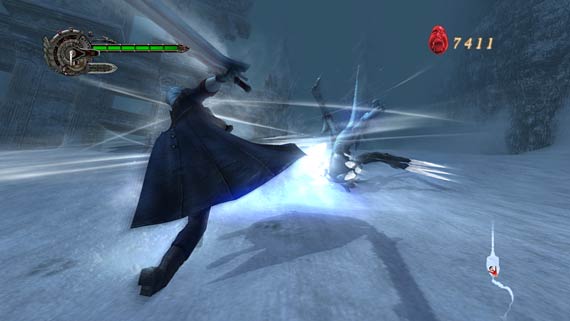 Parents should steer their younger children wide of this one. Mostly because of the epic amounts of incredibly bloody violence, and the scandalously revealing clothes that the female characters wear. It's only appropriate for older teens. Be careful of the unbelievably high level of difficulty, though. As games grow more and more player-friendly, Devil May Cry stands in stark relief, presenting monstrously punishing challenges with little thought to the player's sanity or finger tendons. Also, unless you plan on spending a fortune on replacement controllers and televisions, make sure that anyone you allow to play the game has a high tolerance for frustration.

Fans of the series will find more of the same here. Not only will you get to enjoy another helping of the punishingly hard difficulty, but Dante's story moves forward another tiny, incremental step, as the plot features yet another head demon with a personal grudge against Dante's father.

Deaf and Hard of Hearing gamers will be in serious trouble. Restrictive camera angles ensure that half the time enemies will be attacking from offscreen. Audio cues are the only way of telling when they're about to attack, and there's nothing visual to accompany them. On the upside, there are subtitles, so you'll be able to enjoy the deranged storytelling.