Choose Your Own Path 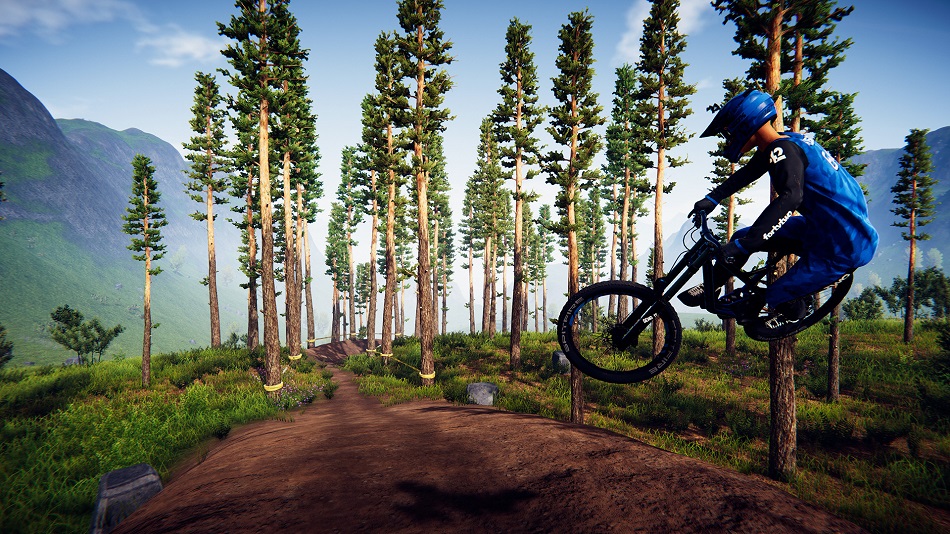 HIGH Double-backflipping over a train.

LOW Just how much speed do I need for the Firewatch jump?

WTF Skipping the trail and racing straight downhill, and still getting a win.

Descenders puts players in the role of a newcomer on the bottom rung of a professional stunt cycle league. After a brief training mission and the chance to sign with one of three different sponsors (each offering different cosmetic gear) it’s off to ride randomized downhill races, and nothing but!

The courses are randomly generated based on three criteria – degree of slope, number of curves, and number of stunt setups. Each one is represented by a bar on the level select screen, giving the player the chance to enter the event that best suits their mood. It also allows players to be somewhat strategic with their runs, as Descenders encourages risk-taking for the chance of gaining extra lives — vitally important as the biomes grow more complex and deadly.

At the start of each run, the player has a certain amount of health. Falling off their bike costs a point. Crashing at high speed or falling a great distance can cost two. The only way to regain health points is to complete ‘challenges’ that appear in each new stage of the event, but there’s a twist — instead of each course having its own challenge, the player is given criteria and allowed to decide which map would give them the best chance of meeting the challenge (or if they want to go after it at all!)

For example, a high-speed target of 65KPH is only possible on the steepest courses. Similarly, players will likely never manage to land two backflips if they don’t pick a track with plenty of stunt jumps. It’s another way the game allows players to feel like they’re making relevant decisions rather than having arbitrary obstacles thrown at them.

The player also has a ‘rep’ meter present at the bottom of the screen. Every time they accomplish something – a stunt, a skid, maintaining high speeds – the overall rep increases, letting them gradually improve their ranking. The caveat is that every time the player crashes, they lose one percent of their overall reputation. If a run ends with the player running out of lives before making it to the end, they lose five percent. 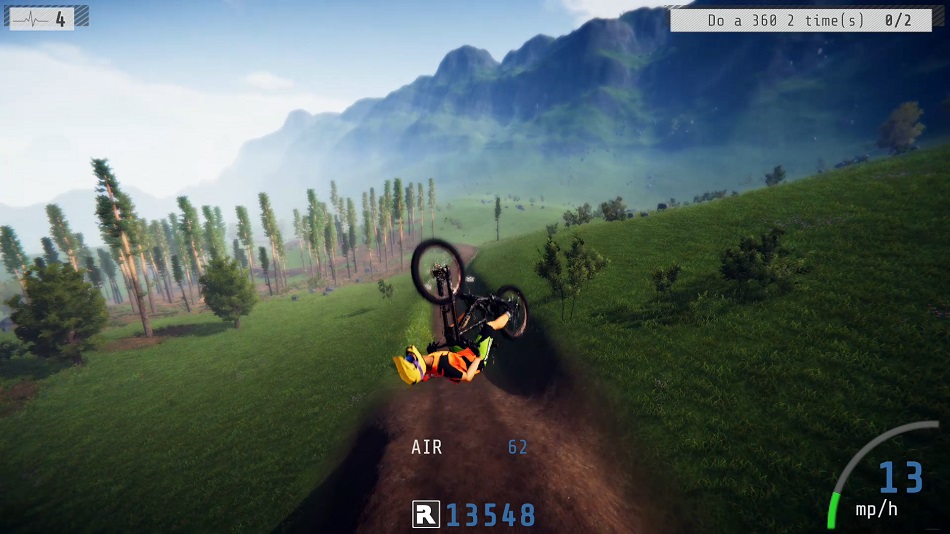 There are concrete penalties for sloppy gameplay – even though this is a roguelike, that score represents a rider’s career, and unless players are extremely good, it’s sometimes better to play it safe and attempt low-risk courses to build their score without risking a punishing loss of rep. Fail enough times in a row, and players will drop down in the rankings, forcing them to claw their way back up if they want to keep earning new unlocks.

The only place Descenders falters is with a bit of sloppiness in course randomization. While the constantly-refreshed runs do a great job of feeling unique despite the familiar turns and stunts, there are certain combinations that the game engine should know to avoid, but currently doesn’t.

For example, there are numerous stunts that can only be completed if the player has a certain amount of speed built up. If those stunts appear on a mellow-sloped course after a couple of hairpin turns, there’s no way for the player to possibly clear them. It’s frustrating, but not gamebreaking because of the other great innovation in Descenders – there’s never any penalty for going off-track.

Thanks to this large degree of freedom players can avoid any stunt they like, cut through any woods or go down any drop to pick up the course again a few turns later – or not, if they don’t feel like it. The track is merely a suggestion, and while its wooden ramps and mounds of earth make for great stunt opportunities, the game plays just as well if the player wants to ignore them completely and race freely downhill, slaloming between trees and boulders. There are even ‘trackless’ races that let the player chart their own course to the finish line.

Descenders is a yet another successful experiment in expanding roguelike concepts into new and different genres, along with tight controls, realistic physics, and easy-to-execute stunts. Randomized courses and great downhill play would have been more than enough to make it worth recommending, but the player choice of overworld maps and the risk-based scoring system raise it to another level. This is not to be missed for fans of the stunt biking experience. Rating: 8 out of 10

Disclosures: This game is developed by Ragesquid and published by No More Robots. It is currently available on PC. This copy of the game was obtained via publisher and reviewed on the PC. Approximately 12 hours of play were devoted to the single-player mode, and the game was completed. There are no multiplayer modes.

Parents: This game was not rated by the ESRB, but I’d say it contains Mild Violence. Honestly, this should be pretty fine for even younger kids to play. Just make sure they understand that in real life you’re not getting back up from slamming into a tree at 40 miles an hour, and you should be fine.

Deaf & Hard of Hearing Gamers: There are no significant audio cues I found, and I had no trouble playing the game with the sound off most of the time. it’s fully accessible.