Perfection as a Dirty Word 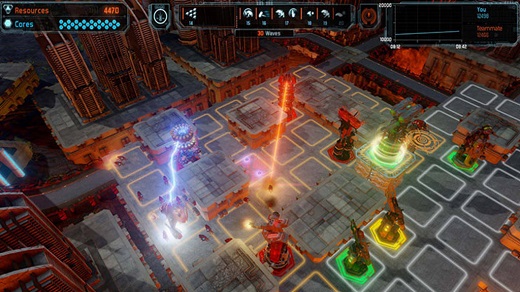 HIGH What a minute—is that Alan Tudyk?

LOW In multiple-path levels the game doesn't bother to mention where enemies are coming from next.

WTF You took away the enemies that missile launchers kill—so why are they still in the game?

The first Defense Grid offered what can be seen as the core ideal of the Tower Defense game: aliens are attacking along a narrow pathway—quick, build towers to kill them! Rigidly formulaic in its construction, DG was saved primarily by its excellent production values. Where other TD games embrace fantastic settings and take chances with their formulas, Defense Grid looked great. The backdrops were lush, the maps were intricate, and its gorgeous tower units were made up of dozens of moving parts, each one a spectacle to watch in action, irrespective of its effect on the alien hordes.

(There was a story laying out the reasons for the alien invasion, of course, but I'm at a loss as to what it might have been. I'm fairly certain GLaDOS showed up in some non-canonical DLC, though.)

Defense Grid 2 wholeheartedly embraces the 'if it ain't broke' school of sequel design. Essentially a higher-fidelity map pack for the original game, DG2 differentiates itself from its predecessor only with an expanded and fully voice-acted storyline, and a few new units and towers—none of which screw up the incredibly vital balance that keeps the game playable and entertaining.

The maps are split pretty evenly between the 'attack a roadway' and the 'build a path out of weapons' gametypes, with the second obviously providing the more satisfying strategic experience—especially now that the developers have added Sanctum-style 'placeholder' towers that mostly allow the player to restrict the routes of the first few waves of foes before they can afford the weapons required to wipe them out.

Despite being so similar to its predecessor, there's no doubt that Grid 2 is loaded with small improvements over Defense Grid. Flying enemies have been removed, so players no longer have to worry about building separate anti-air towers. Instead of earning resources by killing enemies, now credits just pile up in a steady stream, with bonuses added for defeating particularly tenacious waves. A wide variety of satellite abilities have replaced the first game's orbital cannon, each opening up new strategies for beating tougher levels. These changes don't innovate, but each one improves or streamlines the gameplay.

The game makes one feint towards truly fresh gameplay with a feature that allows players to spend credits to make a pre-set alteration to the map, opening up new firing positions in key locations.

This idea—changing the map during gameplay—is an interesting one, but sadly, Defense Grid 2 never does anything meaningful with it. There's a total of one level in the game's 20 where the map changes unexpectedly during the course of play, and it serves as a tantalizing glimpse of the game that the developers could have made if they'd pushed any of the Tower Defense genre's boundaries.

A lack of ambition isn't necessarily a problem here—for players looking for solid Tower Defense, DG2 has a decent story, plenty of well-built levels, and truly impressive number of gameplay modifiers and modes, and it has handily replaced DG1 as the most technically adept game of its type. If being the leading example of the genre is good enough for the developers at Hidden Path Entertainment, then who am I to say that it's not a worthwhile achievement? Rating: 8 out of 10


Disclosures: This game was obtained via publisher and reviewed on the PC. Approximately 10 hours of play was devoted to single-player modes, and the game was completed. Multiplayer modes were not sampled.

Parents: According to the ESRB, this game contains fantasy violence, mild language. There's nothing questionable here. AIs assist the player in blowing up alien robots using sci-fi weapons. It's about as harmless as you can get while still requiring a 'violence' warning. Nowhere in all the AI characters' banter is anything even slightly objectionable said. The 'Mild Language' is so mild I didn't even notice it.

Deaf & Hard of Hearing: All of the dialogue is subtitled, and there are no audio cues! Also, there's full voice acting for French and German speakers as well!