There Are Places Worse Than Bullet Hell 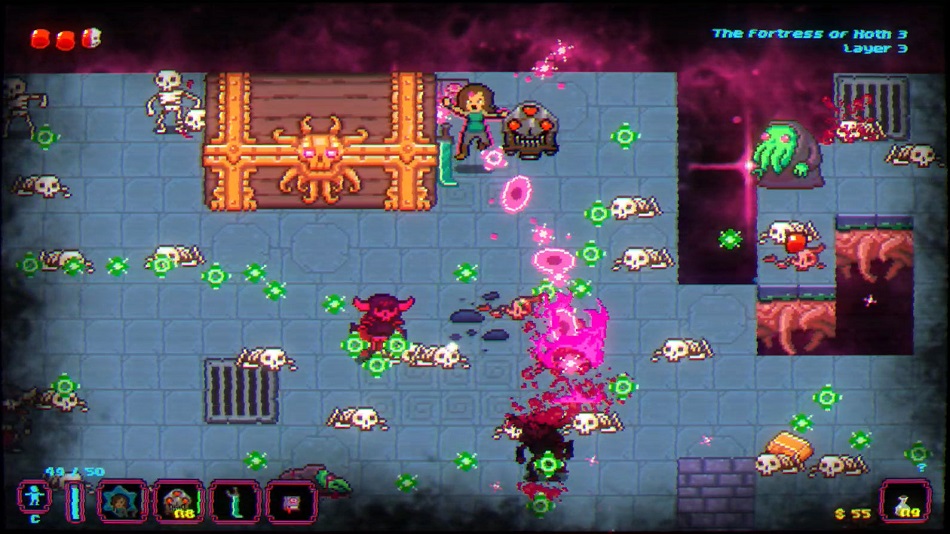 LOW Getting killed by bullets coming from offscreen.

It’s not a twin-stick shooter. It may look like one and the aesthetic may seem to demand it, but that’s not what Deathstate is offering. Instead, this is a pixel-art bullet hell dodging game taking players through locations drawn from the Cthulhu mythos. It focuses entirely on avoidance and timely spell usage, and while it wasn’t at all what I’d expected, that ended up being quite all right.

The game opens with players in a library pulled out of space and time. They’ve arrived to check up on a notable professor whose strange ideas on reality have sent him down some curious investigative paths, many of which end at the maws of the Dreamlands’ most horrific monstrosities. Players fight their way through a series of randomly generated dungeons, battling monsters and finding treasures, unlocking new characters and abilities as they go. It’s fairly standard roguelike construction, elevated by good use of its subject matter and some interesting mechanics.

As mentioned above, this game owes more to the bullet-hell genre than anything else — while the first few levels of the dungeon are populated by charging goons that are easily defeated by the player’s auto-tracking magic cannons, enemies that shoot back arrive quickly and get fierce fast. 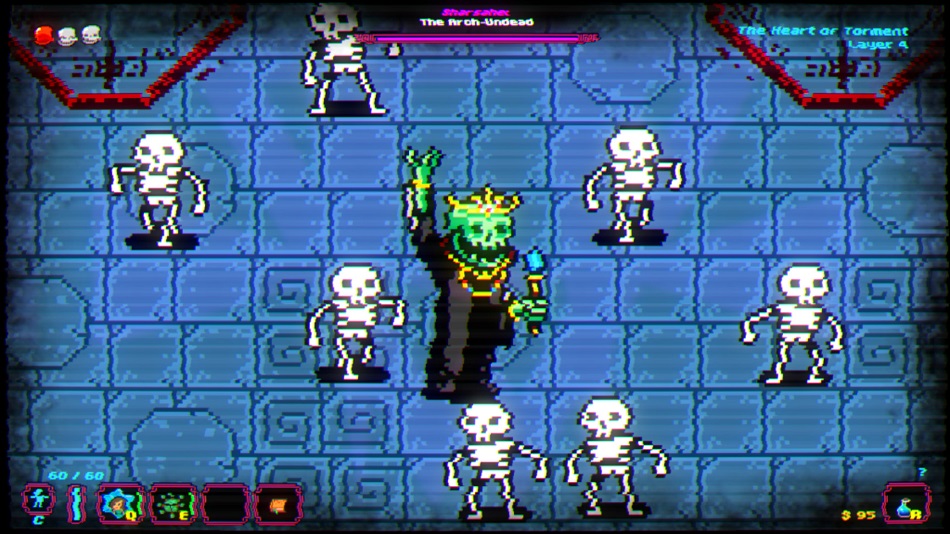 Once past the opening segments, Deathstate embraces dodging as a key mechanic — the left stick is for moving, the right for an invulnerable dash. Since the player will always automatically fire at the closest enemy, this forces players to engage enemies aggressively. This isn’t a game where players can hang back and pick off enemies from a distance — surviving the various dungeons is a terrifying dance of staying close to the most powerful foes and killing them before they have a chance to fill the screen with projectiles.

The pixel-art style is a great way to represent Lovecraftian horrors. The hook of the mythos is that its monsters are so unnatural that they’re impossible to depict accurately, which makes these representations the perfect middle-ground. They’re designed to playfully represent something so inconceivably awful that seeing the real thing would drive someone mad. There’s even a great use of 3D in the game — I won’t spoil it, but it plays wonderfully with the narrative’s message of extra-dimensional forces intruding into the game world.

If Deathstate has a problem, it’s that the developers have placed the camera just a little too close to the action for my tastes. As with all bullet-hell games, the key skill it tests is the player’s situational awareness. They have to be able to find and quickly react to threats coming from all angles, and many of those threats have the ability to attack from just outside the visible limits of the playfield. This borders on being outright unfair, and while it doesn’t make the game unplayable (I was able to beat it with most of the characters) the experience would be improved if the camera were pulled back a bit.

There’s a reason that developers keep going back to the Cthulhu mythos. It offers compelling narratives, endlessly intriguing concepts, and a set of visuals so iconic that they can be dropped into nearly any genre and be guaranteed a reaction. Deathstate captures the wonder and horror of Lovecraft as well as a shooter possibly could, throwing aside existential dread for overwhelming strangeness. This isn’t a genre pairing that I would have anticipated, but once again Lovecraftian horror has proven that it can work anywhere, so long as it’s produced by developers who understand and care about it. Rating: 8.5 out of 10

Disclosures: This game is developed by Workinman Interactive, LLC  and published by Black Shell Media. It is currently available on PC. This copy of the game was obtained via publisher and reviewed on the PC. Approximately 10 hours of play were devoted to the single-player mode, and the game was completed. There are no multiplayer modes.

Parents: This game was not reviewed by the ESRB, but contains violence, blood and gore, and disturbing imagery. It’s Lovecraft territory here, so maybe keep the kids away since it’s all about extradimensional horrors that explode into bloody messes when killed, and an overarching message about the universe being full of terrifying horrors that humanity is not prepared to deal with. Unless you like long existential conversations, keep the kids away from this one.

Deaf & Hard of Hearing Gamers: There are no audio cues that don’t have a visual counterpart. You should be fine.