Have You Seen the Special Editions, Zach? 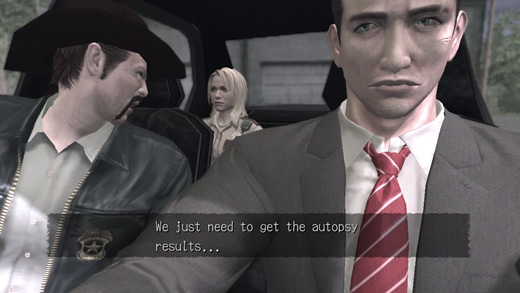 HIGH Wow, the fighting controls are now on par with Silent Hill from 10 years ago!

LOW Not one technical flaw has been fixed. The framerate is worse.

WTF Who thought adding a terrible framing device was a good idea?

There are endless second chances in the video game world. Titles are constantly being re-released, either carefully curated to retain their nostalgic appeal or packed with new features to lure players into purchasing a beloved title for a second (or third…) time.

Usually there's nothing to object to in these new editions—who could be offended by crisper graphics and slightly tweaked controls? Looked at in that context, Deadly Premonition: The Director's Cut

is something of an accomplishment: how often is one of these remakes editions significantly worse than the game it's based on?

The Director's Cut manages to vault under that bar by making two huge mistakes. The first is the game's refusal to fix any of the original's glaring technical issues. The second error—and the far more damaging one—is the inclusion of new story content that serves absolutely no purpose other than to ruin one of the best endings of all time.

The finest video game of 2010, Deadly Premonition told the story of FBI agent York Morgan, who travels to a town in the pacific northwest to investigate the brutal murder of a local teen. (Comparisons to cult TV series Twin Peaks are invited and intentional.)

It was a game of incredible highs and crushing lows, doing a better job of pulling players into its world than any other title on record, while at the same time adding so many layers of bad design and technology that it could seem impossible to pick up and play. A new version had a chance to make it the perfect game—leave the story and character interaction exactly as it was, and fix all of the technical issues. Instead, the developers did the opposite of that.

One of Deadly Premonition's greatest strengths was the relationship that it created between the player and its main character. By casting the person holding the controller not as the main character, but rather as that man's multiple personality (in essence, the voice in his head he consults when making decisions) players are thrown right into York's world.

Over their time driving around Greendale, hanging out and talking about movies, players get a chance to get closer to York Morgan than any other game character ever, and feel like they're truly a part of his story. It's a feature so intrinsic to the game's success that it seems impossible to sabotage, yet the developers have managed it—in this new Director's Cut, things open with a framing device in which an elderly York Morgan announces that he's going to tell the story of Deadly Premonition to his granddaughter who is far too young to be hearing this kind of story. 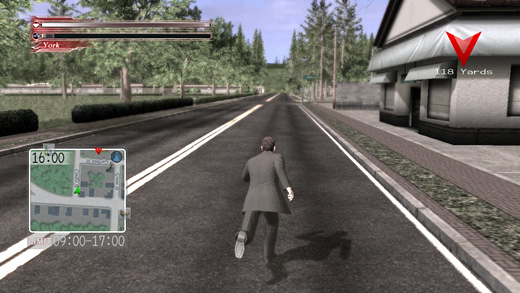 In this one bad decision, the developers strip all immediacy from the narrative, turning players from participants into viewers. Even more maddening is that this new setup adds absolutely nothing to the game. No new information is imparted, and staging the story's events as an old man's reminiscences serves to keep players at arm's length while ruining the game's previously perfect ending, stripping it of its power when the new content finally intersects with the old.

Things are no better on the technical front—not only have absolutely none of the game's glaring issues have been repaired, but at times the framerate actually stutters worse than it did on the Xbox. This is probably due to the game's engine being unable to cope with The Director's Cut's one technical innovation: slightly better graphics.

I use the term "slightly" because while a few models do look a little better and the HUD is no longer bare-bones, the game still has all of the problems with primitive graphics that it was dinged for last time around. The vehicles and environment are still incredibly boxy, owing to the game's seeming origins as an extensively re-skinned PlayStation 2 title. Even with a mandatory 8GB installation to the PlayStation 3's hard drive the loading times are still inexcusably lengthy. Small things that seem like they would have been easy fixes—like awkward text in item descriptions or the utterly non-functional map—have been left as is, to confound and infuriate new and old players alike.

The only real compliment I can give The Director's Cut is that the game's endless, pointless combat is now slightly less of an ordeal. The controls have been tweaked to be less Resident Evil 4 and more early Silent Hill, with camera-relative movement and the ability to walk around while holding a hand-to-hand weapon at the ready. These are actually fairly huge improvements, as they make it easier to either walk straight past most of the game's enemies or smash them to death with one of the game's unlimited-use clubs. Gunplay is still slow and ineffective, however, with the player forced to stand rail-straight and ping useless shots into the zombies that chase them.

There's not usually a case to be made for leaving well enough alone with old video games. Improved graphics rarely spoil an experience, and since modern versions are often going to be played with different controllers, some design tweaks are inevitable. However, when making these new versions, there tends to be a basic level of respect paid to the source material—an understanding of what made the game so special in the first place. That understanding is sorely lacking in the Director's Cut of Deadly Premonition

, and why the game goes from being an easily-ignored addendum to a complete disaster. It's too bad that this is the only way an English version of Deadly Premonition is available on the PS3, since it absolutely should not be played. Rating: 4.0 out of 10.


Disclosures: This game was obtained via retail store and reviewed on the PS3. Approximately 30 hours of play were devoted to single-player modes, and the game was completed.

Parents: According to the ESRB, this game contains blood, intense violence, partial nudity, suggestive themes. This is a sexy, boozy, violent game full of horrible people doing awful things. The main character uses cigarettes to pass the time while waiting for something important to happen. Do not let your children near this game under any circumstances.

Deaf & Hard of Hearing: All of the game's dialogue is subtitled, and there are no important audio cues, other than a 'ding' that plays when all the enemies in an area have been killed and a new path has opened. So you should be largely fine.

Good review this, Dan. Hard to disagree with anything you say, frankly. I was equally as bemused as you to see that Swery’s team had completely missed the opportunity to fix the game’s problems, and to make it more pleasing on the eye whilst increasing its accessibility. The framerate during the initial opening section was atrocious, and almost – right at the moment – put me off playing it further. I didn’t want an unplayable port to damage the image of Deadly Premonition in my mind. Fortunately the game is, at the very least, playable. It isn’t fun though. The… Read more »

Despite Daniel’s mostly valid points, I would absolutely play this version if it’s the only one you can. It’s still a once-in-a-lifetime experience, and while the PS3 version has lost some charm over the Xbox version, for those of us who have permanently abandoned Microsoft (and wish everyone else would as well), there’s nothing else like it, and it’s still as moving as it was back in 2010. Just go into another room when the added material pops up. It’s not as pretty as the Xbox version, which had a hazy patina that gave the game a dream-like quality; the… Read more »

I don’t have an XBox, and I’d been dying to play Deadly Premonition since the buzz on the web was that it’s “so bad it’s good”. In fact I think it was a review on this site that especially made me want to buy it if it ever came out on PS3. Think I managed to pick up a copy for £20, which is an absolute steal. Didn’t stop playing it for about two weeks straight. I admit that the framing device is completely superfluous, but it didn’t detract from the “reveal” as far as I’m concerned. I still had… Read more »