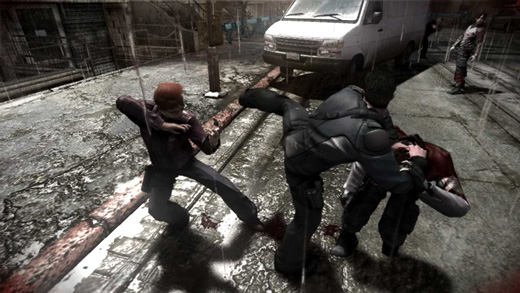 HIGH Pulling a gun out of a thug's hands and using it to blow his brains out a moment later.

LOW Getting shot at point-blank range because the game doesn't understand I want to be punching now.

In a way, I'd hoped it would be terrible. I've played the original Dead to Rights more than any single other game of its generation—I've got something like ten copies of the thing lying around. My love of its utter derangement has been well documented (in the longest video game review ever written), and while the second game, a prequel, couldn't live up to the first's pedigree, the fact that my review was mentioned in the dialogue at least left me with a few positive feelings towards it. It was another five years before another Dead to Rights game appeared, and I couldn't have been more excited about the prospect—hopefully we'd finally get the sequel I'd been dreaming of for nearly a decade, telling the story of just what happened to deranged murderer Jack Slate after killing those hundreds of police officers and fleeing Grant City. It's fair to say that my expectations were pretty high when I finally started playing Dead to Rights: Retribution, and I was shocked by the position the game ended up putting me in. For perhaps the first time in my life I was massively disappointed to be playing a very good game.

Retribution is a third-person hybrid shooter/brawler that exists primarily to live up to the promise that the series always had, but could never pull the trigger on. The concept of the Dead to Rights franchise was always to create a game that would switch seamlessly between shooting and fistfighting, but it was always hampered by creative and technical limitations—problems that have been completely solved in Retribution. The game's genius is that it takes two well-worn and completely familiar genres, the cover-intensive run and gun shooter and the three button brawler and merged them, almost seamlessly, into something new and fresh.

When Dead to Rights' combat works, which is more often than not, players can run through levels gunning down thugs until they run out of bullets, then immediately start brutally beating up the rest of the opposition until they come across an armed opponent, strip the gun from his hands, execute him, and then go right on shooting. The only drawback to the system is a slight lag time between the two camera systems. While shooting the game uses the traditional over-the-shoulder controls, with the left thumbstick controlling movement and the right controlling facing. When fighting, the right thumb must be free to tap out combos, so the camera suddenly begins to auto-center on the closest enemy, recentering every time the player hits a new foe. This switchover takes around a second each time, often creating a slight disorientation as the game tries to figure out just who the player intends to punch. It's more a minor annoyance than anything else, especially considering that in one second Dead to Rights is actually changing what kind of game it is. 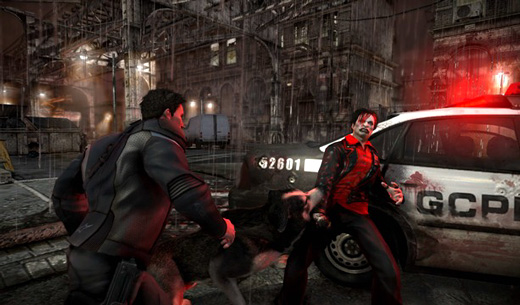 Sadly that game's story isn't the step up that the action is, either in conception or execution. This isn't just sour grapes from someone desperate to see a continuation of an eight-year-old storyline that's never coming, either. Retribution isn't a sequel or a prequel, it's something far stranger in the world of video games—a remake. Franchise reboots are nothing strange—how many variations of Prince of Persia have we gotten over the years? But a "reimagining" that hews so close to the original material is bizarre, to say the least. Instead of creating an original Jack Slate adventure, Volitile Games is apparently operating on the idea that people would want to see something that followed the basic structure of Dead to Rights (cop's father is murdered, he's forced to go on the run with his dog and kill the various crime bosses that can lead him to the killer) even though most of the specific details are changed. For the benefit of anyone who hasn't played Dead to Rights I won't spoil the plot here, but suffice to say it was bizarre to see Dead to Rights' basic plot treated as inviolate, as if the developers were working from some kind of a beloved novel that they were terrified of changing the spirit of while they meddled with the storyline.

It's especially strange because while the original game's story is so mad that it can only be truly appreciated ironically, Retribution's story tries to remain so understated that it winds up being poorly-served by the presentation. Dead to Rights offered an incredibly overblown tale about people fighting over a lost gold mine, featuring a huge cast of bizarre characters. Retribution's story is actually much larger in scope and consequence, but it's presented with just a few speaking parts, and no real sense of the stakes involved. Again, I'm not going to spoil the details, but suffice to say by the last three of the game's ten chapters things have ceased following any kind of real-world logic. The tragedy is that the game is so muted and drab (as part of an attempt to "noir-up" the tone) that it's impossible to really appreciate just how nuts things get in the third act, and the player is left with a storyline that's too crazy to be able to take seriously, but not over-the-top enough to enjoy as camp.

While the developers may not have exactly understood what made the storylines of previous Dead to Rights games work, they certainly have a good grasp of the series's pedigree. Dead to Rights was the most vicious action game of its time, and Retribution goes out of its way to embrace (some might say wallow in…) a kind of hyper-stylized violence that sets it apart from the action game crowd. Every gunshot in the game is met with a huge plume of blood, every time the player delivers an instantly-fatal headshot time slows to a crawl, allowing them to savour their handiwork. Nowhere is this obsession with ultra-violence more apparent than with its portrayal of Jack's sidekick, Shadow the dog. In addition to his normal function as a tool to distract opponents and retrieve dropped firearms, the player is allowed to control Shadow for a few "stealth" sequences, where the monstrously huge dog creeps behind enemy lines to find keys or shut off electric fences. I've put "stealth" in quotes because the "silent kills" that the dog utilizes are some of the most vicious that I've ever witnessed in a game. Shadow creeps around, seeing in black and white, able to hear heartbeats through walls, and when he's snuck up behind guards he can leap up and violently tear their throats out. Between Jack turning enemies' heads 180 degrees around and then tossing them aside and Shadow knocking men to the ground then tearing their groins apart, Retribution sets the bar high for most excessively violent game of the year.

I couldn't name a game that's defied my expectations more completely than Retribution. It didn't give me anything I'd expected, and it proved my assertion that no one would ever crack the fighting/shooting hybrid completely wrong. Retribution gave me absolutely nothing that I was expecting it to, what I was offered in its stead was amazingly violent and fast-paced action. I love the franchise, and I'd have loved another terrible masterpiece, but, thought it pains me to admit it, Dead to Rights: Retribution was not made with me in mind, and it would be ridiculous for me to judge it by my own insane standards. The game achieves almost everything it set out to do, and I have to applaud that.

Disclosures: This game was obtained via publisher and reviewed on the Xbox 360. Approximately 15 hours of play was devoted to single-player modes (completed 2 times).

Parents: According to the ESRB, this game contains blood, intense violence, strong language, suggestive themes, use of drugs. Please, and I can't stress this strongly enough, don't let your children play this game. It's absurdly violent in ways that don't even make sense. There's no getting through the game without killing hundreds of people, and each individual death will be so unpleasant as to make the weaker-stomached among you physically ill. There's drinking, swearing, lascivious comments, and sundry other unpleasantness as well. This is the game for which M ratings were invented.

Deaf & Hard of Hearing: The game features subtitles in the cinemas and of important plot-related information, but incidental dialogue is not captioned. This means you'll be missing out on guards bantering, and Jack's taunts after brutally murdering them. Not a huge loss, actually. The standard 'not being able to hear gunfire' is here, but the game has an onscreen indicator to let you know which direction any off-screen gunfire is coming from, so the negative effect should be mitigated a little.

I just had to look up a review of this one on this site, especially from you. As noted from your long review of the original, I can’t believe that I am commenting on a review that was published more than a decade ago, but here I am. I should have noted this before, but I am on a weird kick with this series. I barely bought this version by ordering it, despite watching the walkthrough on it, as as on the second game, which doesn’t interest me enough to want to own it. I have mainly been watching LPs… Read more »

I’m interested to take another look at Dead to Rights: Retribution since the plot is largely about militarized policing being bad – will it be even more relevant today? In a weird coincidence, we’re currently playing Dead to Rights on the Hidden Object Guru stream, and will likely move on to the next games in the series afterwards!