In space, no one can hear you splatter 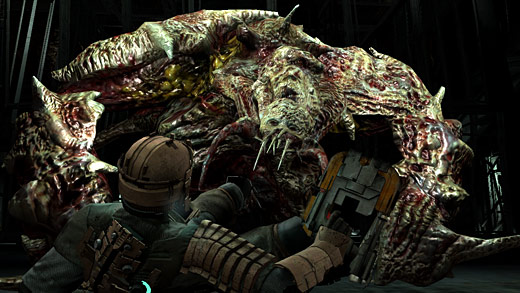 HIGH Blowing monsters to pieces with futureguns is an incredibly relaxing way to spend an afternoon.

LOW The 'plot twist' is so cheap and laboriously telegraphed that when it's finally revealed it seems borderline insulting.

WTF Not being allowed to change difficulty levels during a New Game+. What's the point of keeping weapon upgrades if I can't use them on a harder playthrough?

Dead Space is set in the distant future, where thinly-veiled Scientology has become the most popular religion among humanity, imbuing its adherents with such a fervor to discover alien life that when they find a mysterious plinth on a distant mining planet, they choose to investigate it rather than just run for dear life, as any sensible person would do. Naturally, this expedition leads the miners both on the planet and in the refining ship above to be killed, consumed, and transformed into ‘necromorphs', which, if the name seems confusing, can best be described as the point where Aliens meet The Thing. This fleshy, bladed infestation shows up at exactly the right moment for the player, since they're controlling a technician out on a repair mission, which would have led to some dull gameplay had a third-person shooter not broken out.

Plot-wise, Dead Space is as generic as things can possibly get. All of the tenets of the genre are here—the treacherous teammate, the lost love, the crazed scientist who's somehow managed to convince himself that the mindlessly violent things with knives for arms that spew cancerous growths in every direction are somehow the next step in human evolution. The story is handled in a fashion that should be incredibly familiar to anyone who's ever played a survival horror game. All objectives are assigned by voices over a radio, and all backstory is meted out through crew logs left scattered around the ship's decks.

The art design is, by a wide margin, the game's most interesting feature. Not so much the enemies which, while effectively disgusting, aren't anything new. They're fairly generic as ‘corrupted humanity' themed villains go—only the bosses and a recurring ‘Nemesis'-style foe really stuck with me. No, the standout is the technology on display. The game's conceit is that the future is so utterly draped in holographic displays that HUDs are now unnecessary because the whole world has essentially become a cluttered video game screen. It's a great success, by and large, with guns offering glowing displays of their remaining ammo, and an interactive map hovering in midair. The one questionable element is the health bar running down the character's back—I'm not exactly sure what putting an indicator of someone's overall health in the one place visible only to someone hovering about five feet behind their right shoulder is meant to accomplish. 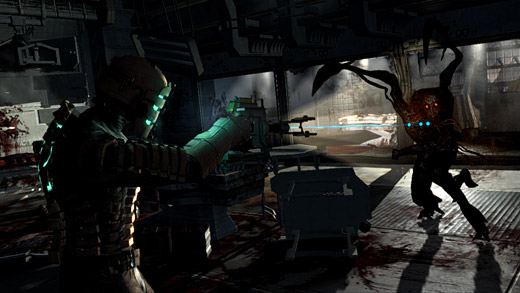 Another high point is the game's interesting use of its setting. Instead of just treating its spaceship like a boat or secret base, as so many other games have done, Dead Space goes out of its way to use some of its setting's more unusual possibilities. There are numerous zero-gravity areas, in which concepts like up and down cease to have meaning and the player is forced to leap from one flat surface to the next while battling enemies. Even more captivating are the areas without atmosphere, which the player has to get through quickly before their air supply runs out. These sections have some of the best sound design I've come across—since there's no traditional noise without air, all the player can ‘hear' are the slight muted noises that represent the vibrations traveling across metal floors and flowing up through the character's magnetic boots.

The game's combat is every bit as rock-solid as something that shamelessly rips off Resident Evil 4 ought to be. Aiming is a snap, and the ability to move while doing it frees the player up to fight tactically and use the environment to their advantage. The big tactical element that the game centers around is the idea that enemies can only be killed by having their limbs removed—the second they can neither move nor attack, they're nice enough to immediately die. It's this feature that cements Dead Space's place as one of the most absurdly gory games to come along in ages. This butchery is made somewhat simpler by the fact that the player has access to a ‘stasis gun' that temporarily create a slow-time field around anything it strikes. Time gimmicks are all the rage these days, but the stasis-gun is implemented well enough, both in giving the player a combat advantage and solving simple environmental puzzles, that it never feels tacked on.

While the game is extremely well-designed, it's not without its problems. First off, there's the fact that everything about it is extremely familiar, and although unoriginality isn't a crime, enough craft went into the gameplay and art design that a similar effort being put into the concept and storyline would have been nice. Also, there's the lack of a quick-180 button, which makes both fleeing and locating enemies fifty percent harder than it ought to be. Then there's the weapons, of which there are enough mistakes made that the discussion of them warrants an entire paragraph.

So then, the weapons. There's a wide variety of them available, which is the first problem. Players are generally given a variety of weapons to reflect either a variety of challenges or play styles. Unfortunately, there's only one challenge in the game—kill enemies—and only one way to do it, by removing their limbs. As a result, all eight of the game's weapons are essentially designed to perform the exact same task, so it's never a matter of the player choosing which weapon is best for a certain situation, but rather which one they like the best. Except for the flamethrower, which is so useless I can't believe it made it into the finished game. The really frustrating part is that enemy limbs aren't that easy to sever (except on Easy Mode, where they essentially seem to be spring-loaded), and all of the weapons start out offensively weak. Sure, they can be powered-up over the course of the game by obtaining upgrade cells, but over the course of a single trip through the game, the player will only have the opportunity to power up one or two of their weapons to the point where they're actually useful, which means that in order to even get a real taste of the game's arsenal, a player would have to go through the entire game three or four times.

Dead Space is completely competent action/horror. It's the perfect example of one company observing another company's success and aping it perfectly. What elevates Dead Space above the Cold Fears of the world is that it isn't satisfied with just copying the thing that inspired it. No, actual thought and craftsmanship went into making sure every part of the game was tight, tuned, and almost entirely hassle-free. This is the video game equivalent of a well-written beach novel or competently-made summer blockbuster. It's pretty and violent and even clever now and again. Lacking originality isn't a mortal sin, and it shouldn't keep anyone who likes action/horror games from giving this one a spin. Rating: 8.0 out of 10 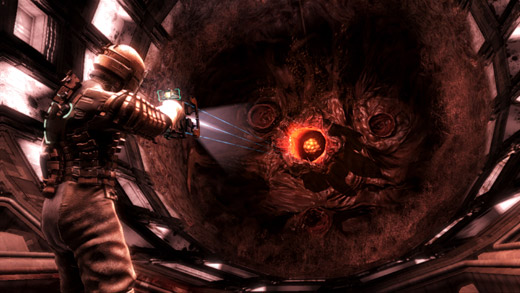 Disclosures: This game was obtained via publisher and reviewed on the Xbox 360. Approximately 20 was devoted to single-player modes (completed 3 times across all difficulty levels).

Parents: According to the ESRB, this game contains blood and gore, intense violence, and strong language. If anything, the ESRB is too light in its warning. This game deserves its own new categorization: "Hypergory." There's literally not a minute that goes by without the player being asked to dismember an enemy that's recognizable as having once been human. Before you even consider procuring it for your children, ask yourself this—do I really want little Jimmy or Sally to freeze a mutant baby in place and then stomp it to death?

Deaf & Hard of Hearing: You're going to have more than a few problems. Directions are given in text and dialogue is subtitled, but throughout the game enemies are always helpfully making noise to indicate when they're about to attack, and without that warning you can expect to get beaten pretty severely. Unfortunately, on the higher difficulties getting snuck up on tends to be an instant-death proposition, so be prepared for some frustration.

I actually got my copy this week and i’m looking forward to giving this game a go. ‘Survival Horror’ will never die!

I feel horribly jaded in saying this, but “a solid RE4 clone” just isn’t enough to make me interested. Plus, I finished “System Shock 2” for the first time earlier this year, and while I did find that particular game to be incredibly satisfying and scary, I’m not too keen on returning to the grey, dull and claustrophobic environments of a generic spaceship again. Why can’t designers come up with anything slightly more original than that?

I wonder how people (gamers and press) would have felt about Dead Space now, December 2008, had Left 4 Dead never arrived to steal the limelight. What was a potential sleeper hit has essentially been put to sleep by Left 4 Dead’s multiplayer survival-horror goodness.

Maybe as with all things in this industry, once the newness of Left 4 Dead wears off, those who played both will look back upon Dead Space and judge it fairly.

well don’t get too excited, I just turned in my second opinion and it’s significantly less positive than Dan’s… comparing this game to RE4 is giving too much credit to Dead Space, IMO.

Finally got around to picking this up over the weekend–looking forward to checking it out soon, particularly now that I’ve read your review.

I was actually able to upgrade everything around chapter 7 of my second playthrough, and it’s completely possible to do that with only 2 or 3 guns on a single run. What I found most interesting is how much more I enjoyed the game while playing on impossible mode. The fact that I was only able to take only two or three hits before dying (at least during the first half of the game) really helped to keep the tension high.

Your review is pretty spot on; a completely playable and solid Resident Evil 4 clone set on a spaceship.

For the most part, I think your review is pretty spot on. I would disagree about the uselessness of the flamethrower. I actually thought it was pretty helpful with those little spidery guys that you have to hack off your body if they get too close. I didn’t think the story was quite so predictable as you. But then again, I’m not a literary type. My wife, however, was able to guess the entire plot after watching me play for about an hour (she’s a writer, though). Personally, I thought the plot twist was kind of effective in the way… Read more »