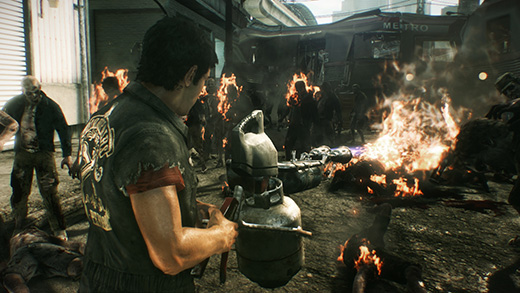 HIGH Finding out why there were only six Deadly Psychopaths.

LOW The wonky driving physics that makes cars flip at the drop of a hat.

WTF I had so much fun running over zombies with a motorcycle/steamroller hybrid that it took me ten hours to notice that it also had twin flamethrowers.

Since its inception, there's been a schism at the heart of the Dead Rising franchise — it invited players to kill huge numbers of zombies in any way they'd like, and then proceeded to make that slaughter as difficult as possible.

In the first game, guns were useless and physical attacks caused Frank West to stop in his tracks, making fighting through crowds nearly impossible.

The second game gave the player the ability to craft bizarre and hilarious zombie-killing contraptions, but making them was such a chore that too much time was spent fetching ingredients and running back to a workbench to assemble weapons that fell apart after just a few kills.

In a twist that nominates Dead Rising 3

for the 'all-time most improved sequel' award, every problem of the previous games has been fixed, and everything that worked about them has been preserved. The result? Probably the best zombie-killing game ever made.

Set after the events of Dead Rising 2: Case West (the disastrous Off the Record is thankfully ignored), Dead Rising 3 takes place in a faux L.A. renamed Los Perdidos, where a zombie outbreak has surrounded main character Nick Ramos and other survivors with an ocean of the undead. The plot follows good-natured lunkhead Nick as he tries to save himself and his friends by working with a series of partners whose motives and schemes are surprisingly complex for a game primarily about zombicide.

It's impossible to sing the praises of DR3's zombie-slaughtering options strongly enough. The 'combo weapon' mechanic from DR2 has been kept and improved – now the player can assemble weapons in the field, whenever they have the necessary pieces in their inventory.

As for the combo weapons themselves, all of the stops have been taken out. Giant explosives, every type of fire weapon imaginable, an electric fighting staff that also freezes zombies into corpsicles, and more are on offer. In fact, I would argue that it could be perfectly marketed solely by offering a list of the various weapons that players can build.

The developers have removed the tiresome fetch-and-collect gameplay of DR2 by offering weapon lockers in each of the game's many safehouses – once the player has picked up or built any item in the game, that item will forever be available in unlimited quantities.

Even the game's gunplay works like a charm – simply shooting zombies was so thrilling that I could spend hours just gunning them down without bothering to build anything fancy.

Everything else about the series is now simplified and easier to navigate. Gone are the escort missions with incompetent survivors who have to be carefully protected. Now survivors can fend for themselves, and once their plots have been resolved, they'll happily pick up a weapon and act as effective optional sidekicks as Nick works his way through the city.

Most of the time pressure has also been removed. If players want the classic experience of breathlessly trying to make it to the next checkpoint before the game ends abruptly, there's a Nightmare mode available. For the rest, playing the game on Normal will now provide players with more than enough time to finish every quest and find every collectible long before the clock runs out.

By breaking out of the 'zombies in a mall' theme, DR3 not only avoids another George Romero lawsuit, but manages to impress with the scope of its world. With four neighborhoods sized at about 25 square blocks each (not including the highways and underground passages linking them) Los Perdidos is huge.

The city is also gorgeous from a design perspective. The game starts days into the zombie outbreak, and destroyed buildings and crashed vehicles are everywhere. DR3 even manages to make zombie spawning an integral part of world building – as the player moves through alleys and backyards they'll see zombies crawling from grates and falling out of windows, creating an impression of a never-ending stream of the hungry dead.

Even the plot is top-notch. Picking up dangling threads from the past two games and weaving them into something spectacular, DR3's story is completely satisfying for fans of the series — it wraps everything important up, yet leaves the door open for future sequels.

Furthermore, the script actually has something to say about America's current political climate. With a Sarah Palin-esque President giving the military carte blanche to operate inside America using any means necessary to deal with 'illegals' blamed for the zombie outbreaks, Dead Rising 3 scores point after point by attacking the concept of a surveillance state, pro-fascist propaganda, and especially the US's colonial abuses in Central America. I didn't come to DR3 for an anti-racism message, but I was shocked by how well it made its arguments while never deviating from telling an interesting story.

Every bit of Dead Rising 3 is tuned to offer the ultimate zombie-killing experience. That it also pays off plot threads from the start of the series and contains social commentary elevates it to greatness. Not only is Dead Rising 3

a must-play for anyone who's ever enjoyed a zombie game, it accomplishes a task I would have thought impossible six months ago – it's a launch title that makes buying an XBONE worth the money. Rating: 9.5 out of 10


Disclosures: This game was obtained via retail store and reviewed on the Xbox One. Approximately 30 hours of play was devoted to single-player modes (completed 2 times).

Parents: According to the ESRB, this game contains blood and gore, intense violence, sexual content, use of alcohol, and strong language. There is no way to overstate how inappropriate this game is. In addition to the omnipresent violence, alcohol is frequently used as a healing item, there are nearly-naked women about, and the some of the content is just flat-out nasty. One of the villains is an S&M freak who's aroused by murder, and another is a monster who's decided to turn his porn studio into a place to shoot zombie-themed snuff films. Somehow this avoided an AO rating, but maybe you should treat it as one.

Deaf & Hard of Hearing: There won't be many issues playing the game – most of the dialogue is subtitled and all of the instructions are written out as text. The biggest problem you'll have is finding a couple of the survivors, whose presence is most easily located by listening for their screams. All in all, though, it's fairly accessible.

Mentioning Palin in the context of “the current political climate” is quite the non-sequitur (as she’s been a non-issue for ~6 years), and possibly disingenuous considering you then mention “surveillance state” which clearly implicates the other side of the political spectrum, and yet you don’t name anyone there…

Dan, that’s great news. I downloaded Dead Rising 2 when it was free on Xbox Live Gold. Played for a couple of hours and couldn’t stand the weapon degradation and ridiculous time limit. I’ll definitely check this out sometime soon. Did you test out the co-op at all? Curious how that works.