Back to the Lost 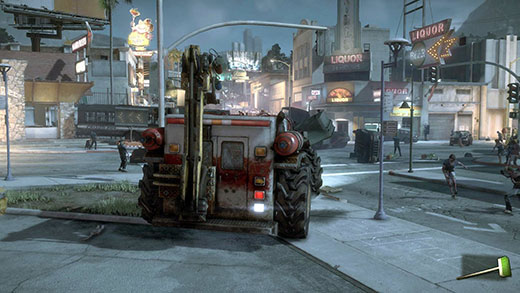 HIGH Spending another 20 hours in the finest zombie-killing simulator ever.

LOW Even at low detail settings on a good PC, the framerate chugs during heavy action.

WTF The SmartGlass features were removed and replaced with… nothing!

At launch time, Dead Rising 3 was the best reason to buy an Xbox One, and for nearly a year it remained at the top of the list of XBO exclusive titles, with only Wolfenstein managing to be a better game overall for the system. That exclusivity has now ended, and PC gamers finally have a chance to play DR3, along with the 4 DLC side-stories packaged in this release of the game.

Everything I said in my review of the vanilla game still stands—it's an incredible experience in zombie-slaughtering that's paired with a story that's surprisingly affecting for fans of the franchise. All that's really left to discuss are the technical changes that have been made in this adaptation, along with the content of the story-based DLC.

Dead Rising 3 made me fear for the health of my computer. There comes a point in every PC's life where it stops being able to run new releases, but since most other AAA titles run perfectly well, I suspected that DR3 was actually to blame.

A series of aggressive patches over the past few weeks have fixed most of the crashing issues, and the framerate has seen noticeable improvements, reaching a point where the game is wholly playable. But, given that even the XBO had trouble running it in certain parts, it's possible that the developers' ambition simply got ahead of them, and they've made a game designed to be played on computers that won't be financially viable for another three years.

Also notable is the content that's been stripped out of the game. Some of it is minor—boss fights in the original version encouraged players to yell specific things to distract their opponents, but the Kinect's finicky voice recognition kept it from working well. Its absence is not missed.

More annoying is the lack of the ZDC lockers and keys that littered the landscape of Los Perdidos in the original. I never discovered what any of them were for—the game promised extra content and missions if those items were used with a Microsoft SmartGlass enabled tablet or phone, but since I don't have one of those, they remained frustratingly out of reach. One of the things I was looking forward to in the PC version was finding out what I'd been missing, so I was disappointed to discover that the developers had simply torn the content out rather than figure out for a way for players to unlock it without the help of superfluous peripherals.

The extra story missions, for their part, vary widely in quality and value, and each one follows a surprisingly strict formula: a new character is introduced and given a task which takes them to each of Los Perdidos's four areas over the course of two hours.

The stories can't hold a candle to the main game's plot—only the first and last are at all interesting, with one providing a surprisingly extensive backstory for a character that Nick killed midway through the main game, and the other offering a satisfying epilogue to the story. The middle two DLCs are just slogs about the uninteresting adventures of unsympathetic characters. I don't know anyone who was interested in what the king biker had been up to before his death, or how one of the illegally-infected got herself killed by the army. Accordingly, half of the DLCs content offers answers to questions nobody was asking.

All four missions do provide some decent opportunities for carnage, however—where the main game's world gradually ramped up the threat, filling itself to the brim with zombies over the course of the plot, in each of the side stories the streets are absolutely teeming with zombies that demand wholesale extermination. The developers, keenly aware of why a Dead Rising game is being played, have stocked the extra missions (and the DLC tab in safehouse lockers) with wonderfully elaborate killing tools. Freeze grenades, rail guns, a variety of new blades and clubs, each with its own unique animation. I was happy to play the ten hours of bonus missions just for a chance to mess around with all the new toys, including the best vehicle in the entire game, a motorcycle constructed entirely out of circular saws.

There's something inherently flawed about the logic behind porting Dead Rising 3 over to the PC. While it makes sense to want the largest possible audience to play the game, DR3 is so large and resource-intensive that running it at anything approaching the XBO's level of visual fidelity requires the purchase of a graphics card more expensive than the console on which it was originally released. For extremely high-end PC gamers who don't have the console in question, this is a great chance to try out a special game. Everyone else should just stick to the original version. Rating: 7.5 out of 10


Disclosures: This game was obtained via publisher and reviewed on the PC. Approximately 20 hours of play was devoted to single-player modes and the game was completed.

Parents: According to the ESRB, this game contains blood and gore, intense violence, sexual content, use of alcohol, and strong language. There is no way to overstate how inappropriate this game is. In addition to the omnipresent violence, alcohol is frequently used as a healing item, there are nearly-naked women about, and the some of the content is just flat-out nasty. One of the villains is an S&M freak who's aroused by murder, and another is a monster who's decided to turn his porn studio into a place to shoot zombie-themed snuff films. Somehow this avoided an AO rating, but maybe you should treat it like it has one.

Deaf & Hard of Hearing: There won't be many issues playing the game—most of the dialogue is subtitled and all of the instructions are written out as text. The biggest problem you'll have is finding a couple of the survivors, whose presence is most easily located by listening for their screams. All in all, though, it's fairly accessible.