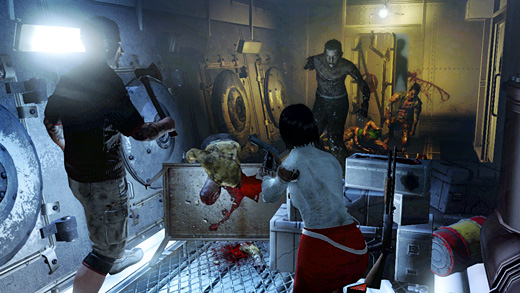 WTF The developers were so sure I would use boats that water enemies don't even trigger if you walk right up to them in the canals.

After completing Dead Island I was so frustrated with some of the baffling design choices that I wrote an article detailing the seven things the game would have to do in order to be game of the year material. It didn't fix them, but I named it my personal GOTY anyway due to a combination of its freshness and a lack of stiff competition that year. Now that the half-quel Dead Island: Riptide

has been kicking around for a while, I thought it might be fun to play the game and see if the developers had made any of the changes I'd suggested in order to fix their interesting, yet broken, title.

1 – Progression feels pointless: Once again, the developers have clung to their belief that zombies should be leveling up along with the players, despite the fact that the zombies aren't completing any fetch-quests. In Riptide, we're right back killing the same zombies with the same four hits it took last game. This problem is exacerbated by the fact that the game insists that players either import a saved game from the first Dead Island, or start a new game as a high-level character. With all of the useful powers already unlocked at the start of the game, players will see absolutely no changes as they level up, save an arbitrary increase in the numbers that appear over zombies' heads when struck.

2 – Weapons are completely non-intuitive: Brad touched on this in his review, but suffice it to say, no work has been done in this area. The inventory system is horrendous, weapons are needlessly difficult to mod and break after a shockingly small number of swings, and the game clings to a monetary system that never made sense for the setting. It's just a disaster, though-and-through.

3 – Analog and digital combat each have major problems, as does throwing: While the bugs in the melee system persist, I'm happy to report that the throwing system has been completely revamped! The big change is that instead of forcing players to carry an array of disposable melee weapons, the developers have introduced dedicated (and stackable) throwing weapons, suddenly making the throwing-based character as playable and useful as the rest.

4 – Environmental damage doesn't scale upwards: Although it seems like this would have been the easiest thing to fix, the developers decided not to bother, and instead removed almost all of the opportunities for environmental damage from the game. This is especially puzzling because it directly conflicts with the inclusion of "base defense" sequences in Riptide. From time to time players will be called to reinforce a hub and defend it against a horde of zombies, Left 4 Dead-style. Part of the defense involves putting up electrified fences to deter zombies, which would be a great strategy if electricity actually harmed them. Since leveled-up zombies have thousands of hitpoints, however, the base damage of the barriers is toothless.

5 – The game is oddly capricious with experience points: There is still a suicider (the zombie who explodes when shot, damaging other zombies) in the game, and when he explodes, killing zombies, I'm still not rewarded for those kills. Enough said.

6 – The "New Game +" is flat-out broken by the leveling system: This is a problem that the developers half-fixed in an update to the original, letting players restart without giving up all of their weapons. This isn't an issue in Riptide because the characters already start at a very high level.

7 – The checkpoint system has a fatal, game-breaking flaw in it: The most frustrating part of the original (the "shaman escort" mission) happened so far into the plot that it felt as if the game was actively trying to punish players with an endless cycle of death and failure thanks to checkpoints which saved weapon degradation. Perhaps the best thing I can say about Riptide is that that it contains no analog to the "shaman escort" mission, and is therefore many degrees less terrible than its predecessor.

After the healthy sales numbers were tallied, Techland must have taken a look at Dead Island and realized that it was still a problematic game that needed to be repaired. Does Dead Island: Riptide

feel like a quickie cash-in used to soak up some money? It absolutely does, but it can't be denied that the devs actually fixed a good number of the first game's most glaring flaws. Three out of seven isn't a passing grade, but at least they put in some effort. Rating: 4.0 out of 10.


Disclosures: This game was obtained via publisher and reviewed on the Xbox 360. Approximately 30 hours of play was devoted to single-player modes, and the game was completed.

This review kinda proves why Dead Island is considered an overrated game. It has too many flaws still to this day. Let’s not even mention the trailer that got everyone excited but was nothing like the game we finally got. Admittedly there is something to build on here, but it would be best for Techland to cut their losses and try a new franchise.