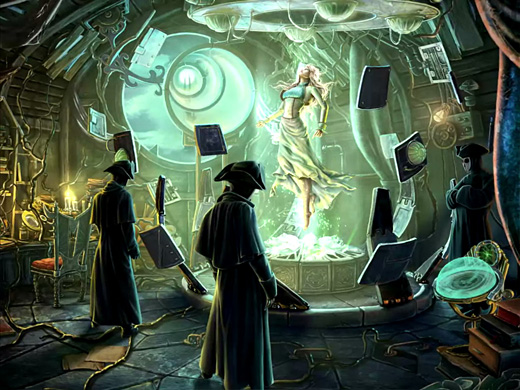 LOW Having to rely on the hint button because I have no idea what to do next.

WTF So they lived in the same town for twenty years and didn't he realize (SPOILER) was just down the street?

I am presented with a fishing net that needs to be cut. I find a set of wire cutters, but they prove useless against the damp string, though perfectly serviceable at cutting through steel. Later on I will find myself stymied by a set of vines clogging an important venue. Discovering a set of pruning shears, an implement designed solely for cutting back plants, I rush to the vines and try my luck… only to discover that no, the game would prefer I use those pruning shears for something other than pruning vines. Welcome to the world of Dark Strokes: Sins of the Fathers

, which undercuts a great setting and memorable artwork with some truly baffling moon logic in its puzzle design.

Hidden Object Game (HOG) Criteria 1: To what degree do the puzzle screens look like a thrift store vomited on my monitor?

Less than most. While Dark Strokes still features the 'find twenty items in the mess to collect the one you need' screens that are so popular in this genre, a few changes by the developers make them seem less arbitrary and tiresome. First off, there are fewer of the sequences than in the standard HOG— especially given this game's length, and more importantly, an unusually large amount of care was obviously put into crafting the screens themselves. While there's still a bit of 'Goodwill explosion' to the locations, the variety and placement of items is far more believable, and the game has no real problems with anachronistic/nonsensical items popping up because the artists were running out of ideas.

HOG Criteria 2: Are the searches justified by the premise/story?

Dark Strokes does an excellent job at straddling the line between HOG and first-person point-and-click adventure. Rather than just searching for items in proscribed areas, players are asked to interact with the environment in wholly scripted, but still very interesting ways. My biggest problem came with trying to keep track of just how much there was to do in every area. At any given time my inventory would have five or six items to go, with a couple of them relating to a screen and obstacle I'd encountered more than a half-hour earlier. This is an impressive amount of depth for a 'casual' title, and it may even be a little daunting for players coming to it looking for pure relaxation.

There's a bad side to the complexity as well—more than once I had a full inventory, plenty of areas to explore, and absolutely no idea what the game expected me to do next. Luckily the game's hint system is very forgiving by providing gradient advice and covering for shortcomings in clear direction. The hints first tell the player what location they're supposed to be in, then point out exactly what part of the screen they're supposed to interact with, and finally just allow the player to skip troublesome puzzles if all else fails.

HOG Criteria 3: How well do the various puzzles and object searches meld together to form a coherent whole?

Boasting an attractive location and chilling enemies, Dark Strokes has an exceptionally enthralling premise, telling the tale of a man who brings his fiancee home to meet his family, only to discover that he's walked them into a trap two decades into the making. Sadly the story doesn't quite hold up to scrutiny—the 'twist' is telegraphed by the game's title, and a 'bonus story' that unlocks when the game is completed actually hurts the story more than it helps. Normally an extra chapter told from the villain's point of view serves to fill in the backstory, but this one raises more questions than it answers.

Still, the game's aesthetics alone make it more than worth checking out. The location—a perpetually rain-soaked seaside village with a nightmarish spire looming over it from across the bay—is the exact type of location where this kind of game should be taking place, and I relished each new location I discovered, finding each to be more attractive than the last. The gothic mystery is exactly the genre that HOGs excel at portraying, and Dark Strokes

's adherence to the formula, with pale women endangered by terrible family secrets, gives the whole game a sheen of class and depth that set it apart from the crowd.

Oh, and the vines? The game wanted me to find a sharpened hoe in order to deal with them. I don't get it either. Rating: 8.0 out of 10.


Disclosures: This game was obtained via publisher and reviewed on the PC. Approximately 6 hours of play was devoted to single-player modes, and the game was completed.

Parents: While the game was not rated by the ESRB, it's roughly in the T range. It contains some violence, little salacious content, and a few alcohol references. While it may be a little more intense than most HOGs, it's safe for all but the most fragile gamer.

Deaf & Hard of Hearing: Like most hidden object games, this one is extremely friendly to the hard of hearing. The cut-scenes are subtitled, and everything else is clearly laid out in plain text. There are no vital audio cues.