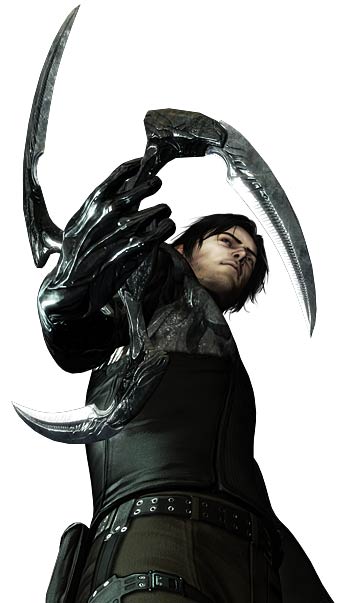 Dark Sector tells the story of the ludicrously named Hayden Tenno, a US government murderer dispatched to a small town somewhere in the former Soviet Union to kill his former teammates, who have decided to take their murdering freelance. His mission is complicated when, at the end of the first mission, he's injected with an alien virus, transforming the game from a third-person shooter into a third person disc-thrower.

Given that the game's roughly six-hour running time consists of nothing but combat, I was glad to see that so much work had clearly been put into the shooting engine. Dark Sector could be offered as a Master Class in utterly competent videogame design. There's a decent cover system to keep the player from getting shot too frequently, fatal headshots to reward the accurate gamer, and instant-kill melee techniques to keep things from getting bogged down in close combat situations. It joins Uncharted as one of the post Gears of War games whose core gameplay is tuned so close to perfection that it needn't even be discussed—there is nothing wrong with the combat. What more can I say? 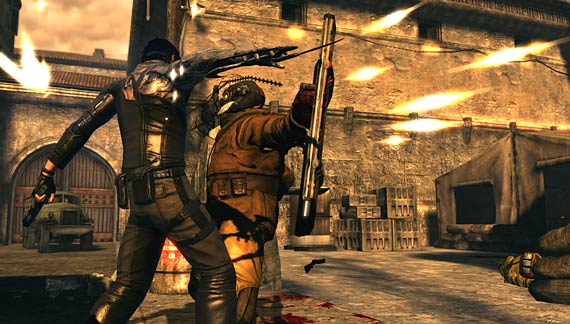 The game's big innovation is the Glaive, and it's as unmitigated a success as the rest of the game. At first what the game asks of the player—aiming and firing two different projectile weapons at the same time—seems extremely daunting, but the controls are so tight and intuitive that tossing blades between barrages of gunfire very quickly becomes second nature. What makes this mechanic so special is just how well the little details work. When executing a 'power throw', the targeting reticle changes shape to tip the player to when the disc is ready to toss. After using it a few times I noticed that the controller shook just as I was supposed to let go of the button. It's a great little tactile detail that pulls the player further into the game, and makes them feel like they're really participating in the severings and bifurcations.

The game also does a great job of meting out special abilities over its entire length. First it's the Glaive, then the ability to slow down time and alter a throw's course in mid-flight. In almost all of the game's ten levels some kind of new ability is unlocked as the virus winds its way through Hayden's bloodstream. Every ability has an immediate, practical use, from force field and invisibility down to the somewhat clichéd elemental manipulation. With this power the player can charge their Glaive with fire, ice, or electricity, and then use that charge to either solve environmental puzzles or kill enemies in visually interesting ways. Sure, getting ice and fire powers is a game feature as old as the hills, but it's not just design laziness that accounts for their frequent appearance—it's there because it works; setting people on fire or turning them into statues and then smashing them are fun, borderline unsettling things to do, and resonant enough ideas that overuse through the years hasn't robbed them of their power.

Everything's fine on the enemy front, as well. Through the course of the game the player is matched up against two distinct families of opponents, the villagers who have been turned into monsters by the virus, and the government soldiers there to clean things up (by killing absolutely everyone). In a fun note, the game takes place over a couple of days, and the enemies' difficulty scales up naturally with the passage of time, rather than just because the player is further along an arbitrary path. The story layers in the idea that the alien virus is constantly evolving, granting its infectees new abilities, explaining the fact that both the player and the enemies get gradually more powerful. The increased governmental presence makes sense in this light as well—it first it seems like the operation will just require soldiers to gun down civilians, but when things are going badly, they break out the shock troops and power armour. 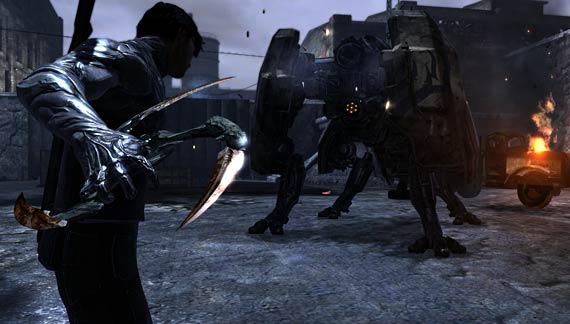 This is the part of the review where I would normally talk about the game's flaws, but it doesn't have any to speak of. At just over six hours it's a little short for an action game, but it's a great ride for those six hours, and I don't think I'm alone in prizing never being bored over raw longevity. The only real design flaw I can point to is one terrible Boss fight. While most of the game's Boss fights are traditional enough, this unspeakably frustrating monster can only be harmed after it performs a specific move, which it almost never performs. The combat in the rest of the game is so good that I was shocked to find myself having Dead to Rights flashbacks 3/4s of the way through. The final boss shouldn't feel like a welcome relief because the previous fight was so badly designed.

Dark Sector brings only one new development to third-person shooters. Of course, the Glaive is such an entertaining weapon that it really is worth building an entire game around. What really impressed me about the game, though, was how well designed everything surrounding that innovation was. The great level design, intense combat setpieces, and the incredibly depressing design aesthetic are all top-notch. It's a prime example of great execution elevating a tired premise. A cursory look at the plot, Special Forces Guy vs. Mutants, might lead the average gamer to think they've played it before, and they probably have—it just wasn't this great before. Rating: 8.5 out of 10

I finally got around to playing this one. It’s down to $20, which seems like just the right price. It’s a fun game, but I think it’s a bit of an exaggeration to say it has “no flaws”. I found the cover system a little more cumbersome than Gears or Mass Effect. It seems particularly strange that you can’t sprint to a nearby object and immediately take cover; instead, you have to stop sprinting and tap the cover key again. The glaive also seems just a hair underpowered. Once you acquire an assault rifle, the glaive feels a lot less… Read more »

That should be ‘bashes you for your disagreements with ALL hyped up games’. May I add that an aweful lot of hyped up games, are actually hyped because they’re good. This review takes a sole focus on game mechanics and even comments on the cliched, shockingly short, storyline of not being of any importance. While Gears of War (which heavily influenced this game) mechanics, which were pretty damn good, were barely mentioned in their review focused in a large portion on the storyline. To implement 3rd person camera that plays like a first person shooter, add to that cover, and… Read more »

Thanks, really great review, made me decide to rent this game, which was definetly a good decision. Decided to post because no-one gives you credit for your good work, only bashes you for your disagreemants with hyped up games.
Keep up the good work!