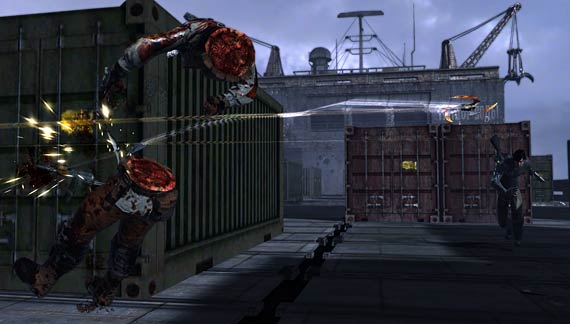 Parents should keep their children away from this game. It's got gory violence, buckets of blood, the depiction of the US government as conscience-free killers bent on regional dominion… they even threw a little bad language in there to fill the warning label up as much as possible.

3rd Person Shooter lovers should check this out. Now that Gears of War has established a baseline of quality that every game can use as a starting point, it's fun titles like Dark Sector that will keep the genre interesting.

Tron fanatics need to pick this up. Sure, Tron 2.0 was a decent FPS set inside a computer, but it really let you down on the whole disc-throwing thing. Not so Dark Sector. If you squint really hard or mess with the colours on your television, you might even be able to convince yourselves that this is a Tron game!

Deaf and Hard of Hearing gamers will be in quite a bit of trouble, as sound is a key element in the game's combat. One kind of enemy is nearly invisible, and not being able to hear them clearly will put you at a severe disadvantage. There are also the normal problems you'll have from not being able to hear gunfire until it's hitting you. Luckily objectives are clearly marked and the levels are fairly linear, so you shouldn't have too much trouble getting around.