The Music of the Night Is Off-key 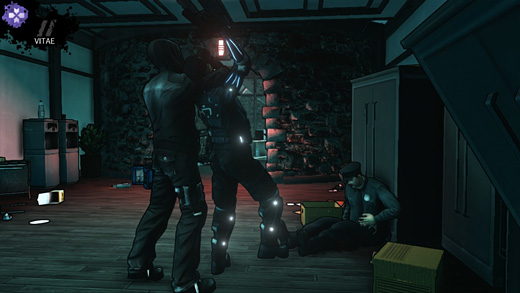 WTF I'm sucking his blood from a foot away? Is that a power? No, just bad graphics.

is that right off the bat, the developers establish its rules and resolutely follow them for the entirety of its length.

Although this strict adherence to structure and complete avoidance of twists can sometimes make the game feel like "baby's first stealth title," its passion for not confusing anyone can be considered a virtue if looked at in the right light.

And since that is literally the best thing to be said, let's move on to the rest…

Past a brief tutorial in which main character Eric Bane (which is somehow his name before he becomes a vampire) learns the ropes of bloodsucking, players are thrown into a twilight world where vampires are pure evil, but the mercenaries preying on them might just be worse!

…Well, not really, but since the game is told from a vampire's point of view, it makes sense to at least attempt to see corporate gunslingers as the bad guys.

Positing a world in which vampires are unusually susceptible to gunfire, Dark oftentimes feels like a low-budget third-person rehash of Dishonored—not just due to its relatively short running time, but also because of the powers offered. After a few hours of teleporting around the map, possessing enemies, and using ranged attacks that made my foes' corpses disappear, unflattering comparisons seemed impossible to avoid.

That's not to say these powers aren't well-implemented in the game—Dark is at its best when putting the player in the position to chain their powers together. A good combo would be "Force Choking" an enemy into oblivion before leaping across the map to snap another guard's neck, and then stunning a final enemy and feeding on him to replenish vampiric energies.

While Dark may lack challenging foes (they're nice enough to follow very basic patrolling patterns and happy to forget about raised alarms after a few seconds) it more than makes up for it in accessibility. It even offers an unlockable power that warns players in advance if a given action will alert enemies. While design choices like these certainly make the game playable, creative and technical issues keep it from excelling.

The story is a perfunctory affair, giving players just enough motivation to keep them killing without ever offering anything to think about. The maps are just as thin—too small and simple for satisfying stealth gameplay, and with far too few opportunities to lure foes into favorable locations before springing a trap.

I'm normally happy to give games a pass when it comes to graphics, since appearances tend to indicate nothing more than the size of a game's budget. At a certain point, however, graphics do slip below the acceptable level of quality. Dark's cell-shaded characters look just fine, but their animations are oddly stiff in normal situations, and bizarre when they're called to interact with each other. For example, whenever Eric grabs a soldier, I'm at a loss as to figure out what he's supposed to be doing—they never really touch.

This is never more embarrassing than when the player is supposed to be draining the life out of foes, but Eric's mouth is nowhere near the enemy's neck. That tiny little cartoon "blood" sprites spurt out while a slurping sound effect plays just moves the whole thing into comedic territory—obviously not the tone the developers were going for. Also puzzling is the way the game shifts abruptly into first-person perspective whenever it's time to drag a corpse out of sight. It's a disorienting change that makes the action difficult, and seems to exist only because the developers couldn't be bothered to create a "carry" animation.

With a lack of both polish and ambition, Dark

will never be anything but an also-ran. As a budget title it's a passable entry-level stealth game, but there's not enough here to justify recommending it when there are so many superior games in the genre. When a game's best selling points are that the stealth is predictable and that the player is a vampire, something has gone terribly wrong. Rating: 4.5 out of 10.

Disclosures: This game was obtained via publisher and reviewed on the Xbox 360. Approximately 12 hours of play was devoted to single-player modes (completed one time).

Parents: According to the ESRB, this game contains blood and gore, partial nudity, strong language, suggestive themes, violence. You shouldn't even consider this one for their children. In addition to the fact that it is entirely about a vampire murdering people at their behest, there's also an upsetting number of naked corpses strewn about the vampire lairs. Just take a step back, kids..

Deaf & Hard of Hearing: You won't have too much trouble—as with most stealth games listening intently for an opponent's footsteps is a key element of the gameplay—but if you're willing to muddle through a couple of hours to power up your character, you'll find yourself with perks that compensate well for the lack of sound.