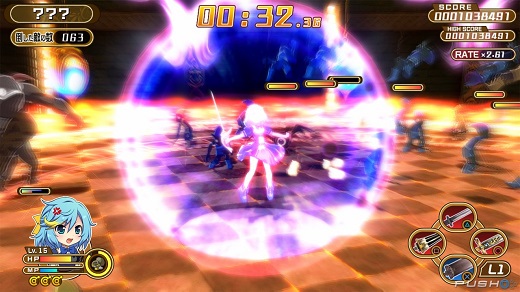 HIGH Taking down a boss with a perfect special weapon chain.

LOW Missing out on a good ending by taking five seconds too long.

WTF Is that all there is to a tower of trials?

While I understand that mini-releases on digital platforms allow gamers to have access to new, different, or classic experiences at reasonable prices, it's still common to come across a game which is just too spartan to feel like a finished product. Croixleur Sigma is a perfect example—its solid action mechanics and colorful designs can never overshadow the fact that it feels like a small piece of a much larger project.

The best way to understand CS is a simple comparison—what if Capcom decided to market Devil May Cry's Bloody Palace mode as a standalone title? That's exactly what CS feels like, as the player takes control of a warrior girl tasked with climbing to the top of a tower filled with monsters… except it has just a fraction of the enemy and weapon types players expect from a DMC-style title.

The story is so basic as to be almost non-existent: There are Knights and Magicians vying for control of a society, and members of both factions prove their worth by fighting their way through a crucible of magical automatons. The game follows four different girls on this quest, which is presented as a journey to the top of a tower (or bottom of a dungeon) collecting gold and unlocking weapons as they go.

The gameplay is 3D brawling at its simplest. There are no combos to learn or movesets to unlock—each character has a set of basic attacks, a dodge, and a variety of weapons from which they're free to select at the start of any run.

The weapons each serve as a special attack that's useable at any time, limited only by a quick-charging stamina bar. There are a good variety available, each one representing a different technique—deadly spin, anti-air strike, ground pound, slow but strong swing, and so on. The strategy mostly consists of figuring out which weapons fit a playstyle best and can be successfully chained together. CS has the core of a good brawler.

Sadly, there just aren't enough different things to kill, and the fighting gets boring, fast. There's a club-swinging monster, a wizard monster who calls down lightning, and a flying eye. Beyond those are some boss monsters who appear infrequently, but players will be asked to fight just those three creatures for the vast majority of the game.

Worse, the game never varies the environments where the fights take place. Every battle is in a small circular arena—sometimes the circle and walls are a different color, and for boss fights the circle is atop a tower, but none of the levels have a hook for players to look forward to or be surprised by. There aren't even a wide variety of rule changes to keep things interesting. Occasionally the small circle will be slippery, and it will be hard for the fighters to walk—that's basically it.

There are a few extra features that keep the game from being completely bland—the dungeon mode does a better job of throwing in different monsters than the regular game, as well as adding an element of weapon degradation into the mix. The game also allows two players to take on the arenas at the same time and even provides an AI partner for the more difficult dungeon mode. There's also a large menu of costume accessories which can be purchased and worn, each one offering a different bonus to stats or abilities.

The developers clearly understand all of the bonus features and metagame elements that a title like this should have, it's just that Croixeur Sigma is a terminally thin product. I would be very interested in playing the full game that should be built around this core, but even at a budget price, I can't say the current offering is worth anyone's time. Rating: 5.5 out of 10

Disclosures: This game was obtained via publisher and reviewed on the PS4. Approximately 10 hours of play was devoted to single-player modes (completed many times) and 2 hours of play in multiplayer modes.

Parents: According to the ESRB, this game contains fantasy violence. You shouldn't have any trouble at all letting most kids play this game if they're interested. It's girls in dresses killing shadow monsters. Fairly tame stuff, beyond a not-at-all sexual reference to characters bathing together.

Deaf & Hard of Hearing: There should be no real trouble with the game. All the dialogue is subtitled, and there aren't any audio cues.

Remappable Controls: The game's controls are marginally remappable—you are able to change which face buttons perform which action.

Colorblind Modes: The game offers no colorblind modes. The only problem this will pose is in dealing with the basic mooks which crowd the levels. They're all mostly darkness-themed, but each one is color-coded to let players know which of the three strength levels they are. This is mildly inconvenient, but the general rule of 'the further you are in the tower, the harder the enemies are' prepare syou for what you're up against.