In my review of Mercenaries, I wondered if it wasn't time to drop the plots entirely from open-concept action games. Let the player run around with a gun, going nuts. I'll be the first to admit that it was a terrible idea. In my defense, though, it was meant as an ironic comment about the poor quality of videogame stories, not an honest call for their removal. Realtime Worlds seems to have run with the concept, though, and the result, while entertaining for a little while, is for the most part an awkward, incomplete mess.

Crackdown is a third-person action game in which the player controls a superhero whose power is shooting people. A lot. In a dystopian future crime is at an all-time high, with gangs waging open war on the streets. Only fascist supercops can kill enough people to restore order, if not necessarily law. That is literally as much story as the game features. After a brief intro movie, rendered in comic book panels for no other reason than to set up the cel-shaded graphics style, the player is dropped into a large city and told to kill 21 people scattered across it.

If the basic concept sounds familiar, it's because searching for specific "gang leaders" to murder across a large open landscape was a key element in Mercenaries as well, although that game offered players other things to do. Crackdown, not so much. Perhaps the first truly open-concept 3D action game, Crackdown features no structure of any kind. Bosses can be killed in any order, at any time; there are no missions to complete, no puzzles to solve, no characters to meet. At first, this seemed like a bit of a bold choice, but eventually I realized that killing 21 people just isn't enough content to justify building an entire game around. There's nothing to do but endless repetitive combat.

Actually, the combat starts out fairly well. Unlike most of its contemporaries, Crackdown features a decent targeting system. Hovering the targeting reticule over an opponent and pressing the lock button will affix the camera to him or her, allowing the player to blast away with perfect accuracy. This isn't a flawless system, though, as most items in the gameworld can be targeted, and the game doesn't prioritize hostiles over inanimate objects, so if a bad guy is standing in front of a car I would find myself just as likely to target it as him. What's worse, there's no way to switch quickly between targets, so whenever I find myself targeting a corpse or a park bench I have to release the lock, manually move my aim, and lock on again. It's a tedious waste of time for a game that's supposed to be about fast-paced action. 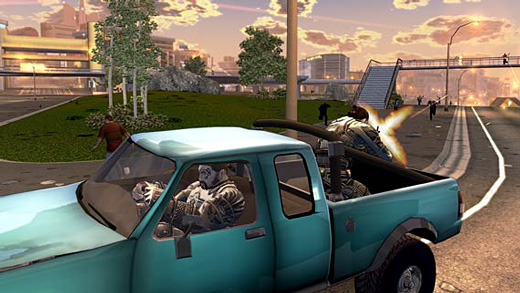 There are combat options other than shooting, though, and for the most part, the robust punching and throwing system works very well, with only a few niggling problems. Especially nice is the fact that the shooting lock-on works for throwing as well, so the game basically guarantees a perfectly aimed throw, making grenades an incredibly useful part of the arsenal. Throwing other things is more of a mixed bag though, as a quirk of the game's physics engine makes throwing large objects surprisingly unrewarding. While it seems like it should be a blast to pick up a car and hurl it at an opponent, exceptionally large objects tend to float through the air seemingly in slow motion. Since they're always thrown in an arc as opposed to directly, it is extremely difficult to hit anything with a car or truck, ruining what should have been one of the game's highlights.

Getting to the point of being able to throw cars is fairly painless due to the game's exceptionally well-designed upgrade system. Killing gang members awards upgrade points based on the method by which they were killed: shooting gives shooting points, explosions explosion points, and so forth. Agility points, which allow players to leap tall buildings over a number of careful bounds, are secreted throughout the impressive city, forcing players to play scavenger hunt to track them down. The system works great, with the game rewarding players based on their play style, improving the abilities they use the most more quickly than the rest.

While the running, jumping, and shooting is relatively satisfying, the game suffers from the fact that the developers either couldn't think of things for them to do with those mechanics, or just couldn't be bothered to include anything. After the first four hours go by and all the bosses are dead, there's nothing of consequence left to do. Compounding the problem is the game's bizarrely awful save system. A popular way to tack on replayability is to allow players to restart the game with their powered-up characters. Not only does Crackdown not allow this, but it's impossible to start a new game without deleting the entire save file.

This even ruins the mild fun that can be gleaned from the game's co-op mode—instead of teaming up with a friend to play through the whole game, both players are forced to continue from however far the host player has made it into the game. Unless playing co-op is the absolute first thing that's done when starting the game (which I recommend), more likely than not all the two players will be able to do is wander around causing random, inconsequential havoc. Fun for a little while, but it gets very old, very fast.

It must be said that Crackdown isn't an unmitigated disaster by any means. The superpowers are entertaining enough. While the combat quickly grows stale, exploring the city is good for a few hours of mild fun. This feels like an alpha build of a game: the point in a game's development cycle where engine is in place, and the world has been built, and a few bad guys running around for testing purposes. Unfortunately, the actual meat of the game, the story and the missions, haven't been added yet. Were it a complete game, Crackdown would probably be a lot of fun. As released, it's just a nice idea and proof of concept, but nothing that anyone should have to pay money for. Rating: 5.5 out of 10.

According to ESRB, this game contains: blood and gore, intense violence, sexual themes, strong language, use of drugs.

Parents will want to steer their children clear of this one. It's excessively violent with blood, explosions, and the wholesale slaughter of innocent bystanders. Not cool for the kiddies.

Fans of sandbox gaming may discover just what a hollow pursuit it is. Sure, there are cars to toss at people and grenades to send them flying in every direction, but doesn't the constant murder get old after a while? It's not like there's anything to do other than shoot people in the streets, and even the most socially maladjusted nihilist is sure to tire of it quickly.

Deaf and Hard of Hearing gamers should be fine. There aren't any vital audio cues, and key information is written onscreen. Even the random audio messages that pop up on the soundtrack are subtitled.

You Fags This Game IS Awesome! While Waiting For Oblivion to come out, I proceeded to beat the game on all dificulties, AND went on a hunt for all orbs

(Note that I now have Oblivion, so Crackdown wont be seeing much action for a while…)

Great review. I agree on all counts.

It’s pretty fun for the first hour or so, then you realize that you’ve done everything the game has to offer. I’m guessing a lot of people feel the same way, since the first week this thing was out, it supplanted all the Gears of War talk on various 360 boards. Now no one mentions it at all.