Maybe Try a Cliff Next Time 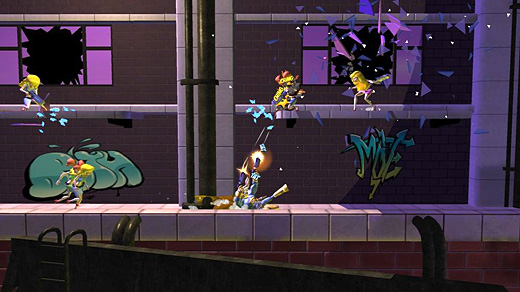 HIGH Seeing the time machine from TimeCop brought a smile to my face.

LOW Wait, I have to pick just one thing?

Comic Jumper feels like it was developed by people who'd never played a game in the genre they were trying to emulate. When the first boss showed up with a hundred thousand hit points after spending ten minutes struggling with monstrously tough peons, I assumed it was intended as some kind of a joke about what a lame comic Captain Smiley was starring in, and that the game was terribly balanced in the first level to reflect that. My assumption even led me to predict the rest of the game's structure: Captain Smiley goes to better comics/games and the engine gradually improves, until he finally gets his own title again, and now it's actually a great game!

This was not to be my experience.

It's difficult to know where to begin with Comic Jumper, since it gets so very many things wrong… I'll start with the combat, since it makes up 90 percent of the game.

A side-scrolling 2D shooter in the Contra mold, Comic Jumper follows its hero "Captain Smiley" as he guest-stars in comics belonging to a variety of genres (Conan, 60s Marvel, Romantic Manga), attempting to earn enough money to relaunch his own comic book. One might be tempted to assume that this variance of genres would be reflected in the gameplay, but sadly, that isn't the case—no matter the setting, Captain Smiley's actions revolve around blasting enemies who either stand in one place while shooting, or run straight at him.

This kind of simple AI isn't a deal-breaker, in fact, it's kind of de rigeur for the genre, especially when the developers want to send waves of enemies at the player—giving each enemy a clever plan just isn't doable. No, the deal-breaker is the baffling decision the developers made to give each individual foe thousands upon thousands of hit points.

There's a line between a "design choice" and a design mistake, and this is well on the bad side of that line. Deadly Premonition-level bad. How much of a chore is the combat in Comic Jumper? After playing the game for a few hours and fully upgrading my gun, each individual enemy took two seconds of sustained fire to kill. While this is a huge improvement over the five seconds it takes at the beginning of the game, either option is unacceptable for the kind of game this is. 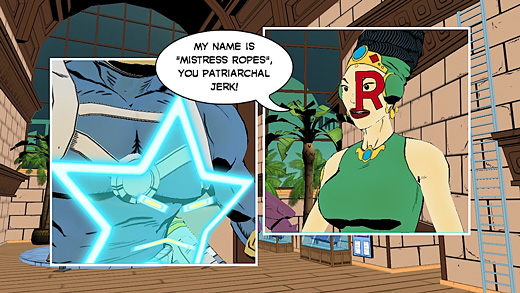 When every enemy is a ridiculous bullet sponge, the game can be played one of two ways—slowly crawling forward, taking care to kill each foe, or just barrelling around, jumping and sliding under attacks, not even bothering to plink away ineffectively at their massive health bars for the brief amount of time that the enemies are onscreen. Now there's a Sophie's Choice of gameplay—do I want to feel like playing the game is an onerous slog, or feel like I'm skipping most of the game's content? For the first few levels I played the first way, but once the game had finally beaten into my head the fact that no, things weren't ever going to get any better, I quickly switched over to the second method.

There are a few slight variations to the gameplay scattered through the issues. Some sequences involve the player automatically moving forward, jumping over obstacles while also constantly firing at dozens of near-impervious enemies, while other sequences prove conclusively that the SHMUP is another genre for which the developers have absolutely no affinity. These bits are especially awful—I mean, seriously, how hard it is to get a SHMUP wrong? Game developers, learn the lesson of Comic Jumper: first thing, make sure the player's onscreen avatar doesn't take up 1/6th of the screen, and therefore actually has the ability to dodge incoming fire.

All of what I've just detailed is only what's wrong with the gameplay—I could go on for pages about how flat, derivative, and uninspired the supposedly "hilarious" conversations and cut-scenes are, but in doing so I'd likely wind up repeating some of the content of them, and I'd rather spare anyone who hasn't played the game that experience. In fact, there's another lesson for future game developers: Being random isn't the same thing as being funny. Also, watch it with the woman-hating. There's a line between mocking misogyny and being misogynistic. Like the design mistake line, this is one that Comic Jumper vaults across with abandon.

Deep down, I really want to believe that this is all some sort of Andy Kaufman-esque practical joke at the expense of everyone unfortunate enough to buy the game. There are a couple of QTE sequences which are so terrible that, taken on their own, make the case for this theory pretty persuasively. However, I can't believe that's true because of the game's exhaustive supplemental material. Using money made by completing missions, the player can unlock around 200 pieces of bonus content (the menu for doing this is so user-unfriendly that simply buying all the art and videos took nearly fifteen minutes), each one lovingly explained with a paragraph of detailed text.

Like I said, I could almost believe that a group of people could develop an entire game as a masterstroke of conceptual comedy but the reams of fawning, self-congratulatory text prove that theory wrong. No one is that dedicated to the joke. Sadly, Comic Jumper isn't a subversive jab at the overpriced junk that gets fobbed off on the unsuspecting game-playing public, it's just an example of it. Rating: 2.5 out of 10.

Disclosures: This game was obtained via publisher and reviewed on the Xbox 360. Approximately 7 hours of play was devoted to single-player modes (completed 1 time).

Parents: According to the ESRB, this game contains cartoon violence, crude humor, language, suggestive themes. The language isn't especially offensive, and the violence isn't too brutal, but the content of the humour is so pervasively misogynist I'd warn parents against letting younger teens play the game unsupervised.

Deaf & Hard of Hearing: While the main story is subtitled the characters' incidental comments while playing the levels aren't, so you'll be missing out on about half of the game's comedy writing. There aren't any audio cues, though, so you'll be able to play the game just fine. Although, really, why would you?

based on the previews and reviews that came in for this game leading up to the games launch, i was excited to try it out, even though i was underwhelmed by the studios two previous effors, the maw and splosionman (which was ok but quickly became repetitive and dull). anyway, i played about 3 minutes of the demo and could not handle any more. the double whammy of gratingly unfunny “jokes” and atrocious gameplay was too much. i cant help but wonder why this game has received a generally favorable response.