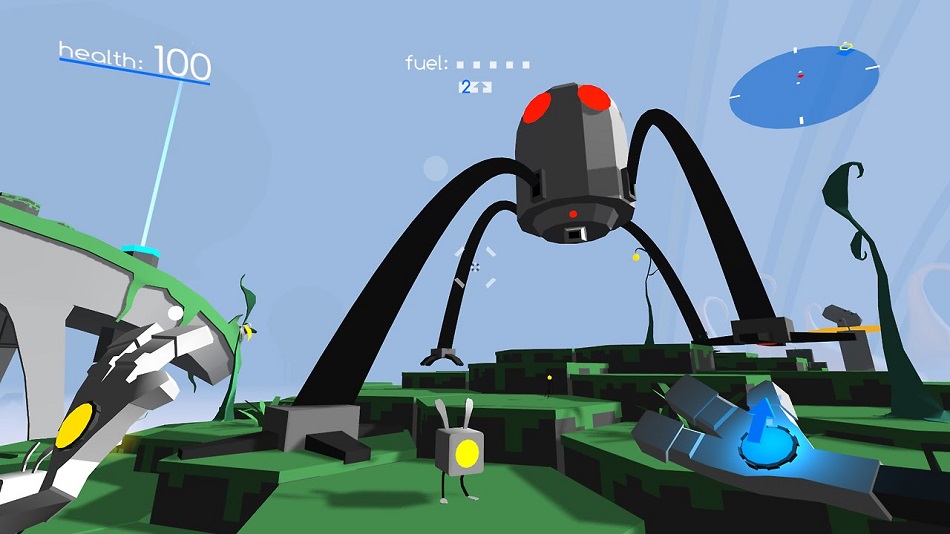 WTF My suit’s change of attitude after (REDACTED) happens.

Cloudbase Prime makes good use of minimalism. Set within the atmosphere of a gas giant, the game casts the player as a repair technician inside a cranky suit of power armor. He’s tasked with defeating a robot uprising which is preventing mining facilities from stripping the planet of its resources. While this premise makes the game sound more political than it actually is, the focus is on shooting robots with an energy gun and hopping around a cotton candy sci-fi world of floating platforms.

Bringing to mind PS1 classic Jumping Flash, much of the player’s movement involves flying high into the air and then making precise landings, all in first-person perspective. The power armor lacks significant vertical power, though — to compensate, players are forced to modify the environment, which is entirely made up of tightly-packed hexagonal columns. These columns can be pushed down or thrust up with the press of a button, and standing on one while it rises causes the player to be launched into the air, allowing them to carefully drift down to their chosen landing point.

Getting a hex-boost is a simple and delightfully empowering system, and the bright and airy world in Cloudbase Prime is built to float around in. Zooming from one set of blocks to the next as adorable ‘bots make quips is a relaxing experience that manages to offer just enough challenge to keep things from getting boring.

There’s also an impressive amount of cleverness on display thanks to puzzles that offer twists on familiar formulas. In one, players might be guiding bunny-bots to a cannon so that they can be launched into an enemy factory. In another, players will use their world-shifting ability to adjust the course of a roller-coaster. In addition to the expected jumping puzzles, there are also numerous ways to traverse levels, including a late-game upgrade that introduces new mechanics just when the normal gameplay was at risk of growing stale. From an overall standpoint, it’s a lovely experience… 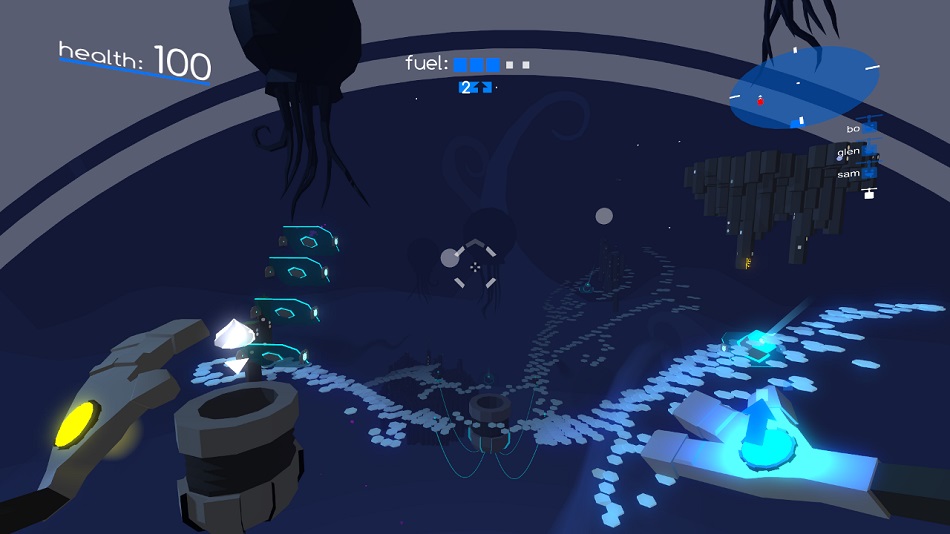 When it’s first introduced, combat seems like another pleasant diversion – there are big, boxy robots bumbling around, which the player can kill with a few laser shots or by launching them into the air with columns. The second option is vitally important, since it’s only by doing this that players get access to the fuel cells of the robots, which they need to use their other combat powers — things like launching huge numbers of enemies at once, or imbuing weapons with elemental powers.

It’s a solid system in theory, but the developers haven’t done a great job of balancing it. The player’s gun fires slowly, doesn’t do much damage, and its projectiles fly at about half the speed that would be useful. In contrast, enemies move fairly quickly, and all have a decent amount of health. Every time I found myself in a combat-intensive level, I also found myself cursing the sluggish controls as I tried to outmaneuver the homing missiles that too many enemies (and almost all the bosses) have access to.

If the developers had restricted intense combat to only the boss levels, Cloudbase Prime would work better than it does – right now, the massive amount of unpleasant fighting outweighs the light and playful elements, and it’s these latter aspects that seem like the game’s true identity.  To its credit, however, the ending isn’t locked behind the questionable combat mechanics. If players fail the boss fights a couple of times in a row, they’re offered a ‘power mode’ that will amp up their weapons to the point that it’s nearly impossible to lose. Clearly the the developers were aware of these issues, and this is their solution.

Cloudbase Prime is light, funny, accessible, and does a great job of offering puzzles in the sweet spot of obliqueness where players might be stumped for a little while, but then feel very clever for having solved them. It’s a pity that the over-represented and underwhelming combat is such a focus, as it keeps this title from reaching the heights it might have otherwise managed. Rating: 7.5 out of 10

Disclosures: This game is developed and published by Floating Island Games. It is currently available on PC. This copy of the game was obtained via publisher and reviewed on the PC. Approximately 4 hours of play were devoted to the single-player mode, and the game was completed. There are no multiplayer modes.

Parents: This game was not reviewed by the ESRB, but contains mild violence. It’s just exploding robots here, nothing to get too upset about. Even plummeting off the edge of a cliff is never particularly traumatic, since helpful robots are always around to drag the player back to safety. Other than the sometimes hectic combat, it’s a fairly chill game.

Deaf & Hard of Hearing Gamers: There are no important audio cues that will impact your enjoyment of the game, and all dialogue is subtitled. It’s fully accessible.