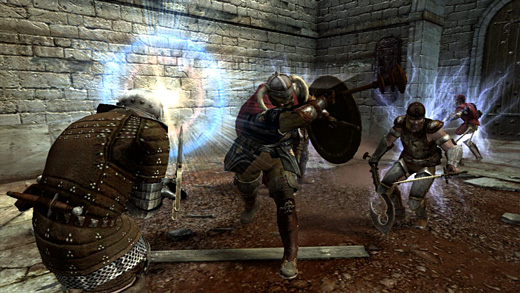 HIGH Knocking the sword out of a skeleton's hand, then crushing its skull with a mace a moment later.

LOW Oh good. Let's fight three guys in the crumbling courtyard for the sixth time. That never gets old.

WTF Why does this boss obey none of the game's rules? Why am I fighting him twice?

In this age of Day-One patches, always-on connections, and "beta-by-any-other-name" releases, Clan of Champions may not be unusual, but it should definitely stand out as an egregious example of selling an unfinished product. Egregious not because it's excessively buggy or crash-prone, but because it contains nowhere near enough content to justify calling it anything more than a tech demo.

A third-person brawler built on an upgraded version of the Colosseum: Road to Freedom engine, Clan of Champions is set in a fantasy world where heroic paladins wage war against an army of necromancers, three soldiers at a time. It might sound interesting, but it's presented in the most static, uninvolving way possible. The player first creates a generic fighter, then chooses which mission to play from a menu. Reading the text explanations of each fight's circumstances is wholly optional—and they're so blandly written that even poring through them will likely leave players unclear on the specifics of what they're supposed to do and why.

Not that it matters very much—the missions are so straightforward that it's never too difficult to muddle through.

Unlike the games that preceded it, there's no real variety to Clan's mission design. The player is dropped into one of a shockingly small number of arenas along with two AI or co-op partners, and three foes attack. Sometimes there are waves of foes, and sometimes a couple of arenas need to be cleared out, but levels are never more complex than fighting an evenly-matched group of humanoid enemies for 1-5 minutes. The closest the game comes to a conceptual risk is having the heroes battle four enemies in the last couple of levels, as well as a single boss. It's a nice change of pace, but it comes far too late to make up for the 90 percent of the game that's extremely repetitious. 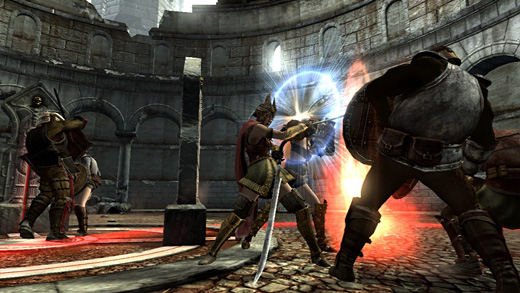 The actual gameplay is just as wonderful as it was in Colosseum and Gladiator Begins—better here because it's finally free of the stuttering framerate issues that plagued those titles. Fighting is equal parts twitch gameplay and careful strategy, requiring players to watch their enemies' moves and probe for weaknesses, then attack all-out with a flurry of strikes the moment they find an opening. There are three fighting styles and a huge variety of weapons to choose from, but because weapon reach isn't much of a factor, the only practical difference between them is whether the player wants to fight defensively by using a sword and shield, or offensively using either of the other two styles.

This flaw in the combat system is made worse by the utter incomprehensibility of the equipment upgrading system—at the end of each level the player is offered a list of all the weapons and armour that the enemies were carrying, and despite the fact that the equipment was left lying at the feet of bloodied foes, the player has to pay in order to claim the swords and shields for themselves.

Once weapons have been obtained, things only get more convoluted. To enhance this equipment, the player has to combine them with other weapons, increasing their attack, defense, and weight stats. This creates a frustrating balancing act where the player is required to occasionally augment their most prized equipment with inferior scraps to get the weight back down, ensuring that the weapon never becomes too heavy to wield. Adding insult to injury, every step of this process requires spending currency.

The whole experience is frustrating, adds nothing to the game, and there wasn't a single moment struggling through it that I didn't wonder why I wasn't simply allowed to use the game's currency to improve weapons—why add all these convolutions to a tried-and-true formula? At least the fighting engine this game is built on is a solid one—I count Colosseum as one of my all-time favorite PlayStation 2 games. The fact that the developers did little-to-no work beyond updating the graphics doesn't diminish their base-level success, but it does give everyone good reason to avoid this title.

Were Clan of Champions a skeletal presentation piece designed to convince a publisher that these developers were worth investing in, I would give it extremely high marks. As a finished product that people are asked to pay money for, it's completely unacceptable. Honestly, if they have this graphically updated version of the engine ready to go, why not just sell Colosseum or Gladiator HD without the performance bugs? That seems like a much better use of everyone's time than releasing this underdeveloped third of a game. Rating: 3.5 out of 10.


Disclosures: This game was obtained via publisher and reviewed on the PC. Approximately four hours of play was devoted to single-player modes, and the game was completed. Multiplayer modes were not sampled due to an inability to find anyone playing the game online.

Parents: According to the ESRB, this game contains blood, violence. There isn't actually that much blood—just the occasional broadly representative cloud of red mist to indicate injury and a few wounds. The game's lack of a story—or really anything but combat—prevents there from being opportunities for any other kind of prurient or questionable content.

Deaf & Hard of Hearing: Feel free to go nuts—no audio cues necessary for enjoying the game, and no dialogue to subtitle! What little story there is is presented as static text screens, so you won't miss that either!