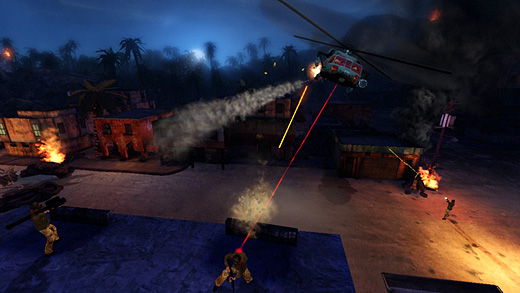 HIGH Lifting off just as zombies swarm in from all sides.

WTF There are zombies chewing on you! Why are you shooting at me?

Offering a remake that no one asked for is a risky proposition. When dealing with modern HD updates, developers are banking entirely on name recognition bringing attention to the product. With something like Pac-Man or Galaga this is an easy bet since they're integral parts of video game history. If someone offered a Gorf or Congo Bongo HD, on the other hand, they'd wind up with blank stares where they hoped to find eager fans. Choplifter, I fear, is closer to Bank Panic on the beloved nostalgia scale than Berzerk.

Despite this handicap, developer inXile went ahead and produced a Choplifter remake, and it's a success insofar as it manages to recreate the feel of the original game with modern graphics while offering added gameplay mechanics. It's also a failure in that it neglects to fix any of the original game's problems on top of adding a few new ones.

Offering a total of 30 missions, Choplifter asks players to use three different upgradeable helicopters to complete objectives ranging from rescuing hostages to destroying enemy encampments. While that sounds like a decent amount of variety, the missions all generally boil down to destroying some AA and landing to either drop someone off or pick someone up.

The game certainly gets points for its focus, as the core mechanics are never overcomplicated with powerups or boss fights. While a wide variety of enemies are parceled out over the course of the game, none of them are so bizarre as to violate the classic structure of Choplifter's gameplay. The only real changes are the ability to aim the chopper's cannon with the right thumbstick/mouse, and a boost button which allows players to dodge missiles while burning off fuel. Both additions fit in perfectly, and serve only to make the game more enjoyable.

The "three different kinds of helicopters" seems like a great idea, and it largely works. There's a simple fast police helicopter, a large transport helicopter, and a sleek attack chopper, each one well-suited to a specific type of mission. The problem lies in the fact that every level is designed with a specific helicopter in mind, to the point where attempting them with another type—which the game encourages players to try—is a fool's errand. Rather than letting the player decide which helicopter would be best for a given situation, there are three distinct campaigns, and the player is forced to play through each one with the proper helo once before unlocking the ability to try them again with a less effective model. Why would I want to?

While most levels feature a standard rescue hostages/drop off commandos structure, there are a few standouts, such as the "escape" levels which give the player a single tank of gas and force them to get from one end of the map to the other, or the zombie level, where the player has to quickly scoop up survivors before they're overrun by hordes of the living dead. While a "zombie mode" is somewhat de rigeur these days, in Choplifter HD it offers a thrilling change of pace, which is why it's so disappointing that there's only a single zombie level in the entire game even though zombies appear in other levels.

This brings me to my biggest problem with the game, one that has plagued Choplifter since the 80s—the camera is far too close to the action. The developers made the odd choice to not only put a time limit on every level, but make it one so strict that most of the time the player is forced to boost through much of the level. This wouldn't be such a chore if more of the play area was visible, and the player had the ability to see when a cloud of flak or a construction crane is going to be blocking their progress. With only a half a second before everything off-screen is slamming into the helicopter, players are forced to either fly slowly and carefully enough that they put completing the level at risk, or memorize layouts though trial and error—a process enjoyed by no one.

certainly does its predecessor justice, faithfully recreating the original's highs and lows, and offering beautiful graphics to make up for the lack of original thinking. While there may not be much depth or replayability to Choplifter HD, it's certainly an entertaining diversion which serves as a testament to the solid gameplay mechanics of a title from thirty years ago. Maybe Choplifter was never a top-tier game, but it's certainly one that warranted a second look, and inXile gave it the update it deserved. Rating: 6.0 out of 10.


Disclosures: This game was obtained via download and reviewed on the PC. Approximately 8 hours of play was devoted to single-player modes, and the game was completed.

Parents: According to the ESRB, this game contains alcohol reference, blood, language, mild suggestive themes and violence. You should be wary about letting younger children near this one. The violence is surprisingly graphic and unpleasant. Infantry explode into fountains of blood when shot, or sometimes get engulfed an a burst of flame, then run around screaming until they finally die. Things are make immeasurably worse by the callous commentary by the unpleasant pilot and co-pilot that the player controls, who are never without some mocking statement to make about a human being they've just killed. Really, I'm not sure how this game  didn't get an M. Is it because the people being blown to pieces are so tiny on screen? I wonder what the calculation is for how big an exploding person has to be before it becomes objectionable…

Deaf & Hard of Hearing: You're going to have serious problems playing the game. Three of the game's deadliest attacks have audio cues to let the player know it's time to dodge, and only one of them has an accompanying visual cue to help the hard of hearing out. Subtitled dialogue lets players know when to land at bonus destinations that aren't listed on the map, so at least that won't be a problem, and objectives for each mission are clearly laid out in text at the outset.