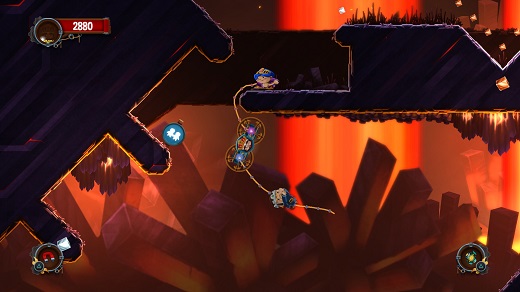 HIGH Finally nailing that mid-air vault off a flying cart to collect a secret skull.

LOW Slamming into the same wall over and over again in the terrible speed section.

WTF I may have a new favorite video game skeleton.

Chariot is is a deceptive game.

I'd almost call it a bait-and-switch, if the developers had actually ever claimed that it was fun for the whole family. Everything about Chariot's presentation screams 'accessible co-op title you might want to use to introduce people to gaming'—the cartoonish art style, the wacky premise, the bloodless combat against adorable foes… It all looks so welcoming and approachable.

Don't be fooled, though. Chariot is a sadistically difficult and incredibly tricky puzzle-platformer requiring the kind of perfection in gameplay that one would normally expect from retro-themed pixel titles… Or at least it was until the Royal Armory DLC was released.

Set beneath a fantasy kingdom, Chariot tells the story of a heroic princess and her stalwart fiancée. The pair are tasked with bringing the deceased King's corpse to a suitable sepulcher, while collecting gold along the way. Fortunately, the royal casket is attached to a pair of ropes and sports wheels for easy transport!

One or two players have to make their way through side-scrolling mazes, over obstacles, past hordes of gold-eating looters, and down steep hills atop the rolling corpse of the monarch. Not that he's dead in any serious way, of course. The game's macabre premise is lightened by the presence of the King's ghost, who pops up from time to time in order to complain about how shabbily his coffin is being treated, or to demand that more riches be added to his posthumous pile.

Chariot boasts an excellent learning curve. Players start off pushing the cart up small ledges or dragging it across precipices, gradually gaining the skills necessary to cope with challenges that pop up in later stages. Ice floors, lava pits, magical floors that support the cart but drop the player—things get daunting across its five levels, and it never lacks for invention. There was no point at which the game ceased to surprise me with inventively cruel challenges that took every bit of my skill to overcome.

This brings me to the game's conceptual flaw—it's far harder than it ought to be. I invited a casual gamer to try the couch co-op with me, neither of us having any idea what to expect. They quit after three levels, frustrated with the split-second timing and quick reflexes that Chariot calls for.

I don't particularly blame them, either. One of the most common techniques asks one player to dangle the cart over a ledge and have a second player drop down to it, make a preposterous jump, and then drag the cart (and first player) to the new safe location. It's quite tricky for two seasoned players, and someone who's not great at platforming will find themselves making sure the rope doesn't move while someone else does all the work. This doesn't feel like a partnership, and I don't recommend Chariot for co-op unless both parties are skilled gamers. On the upside, there aren't that many co-op only areas, and they aren't necessary for completing the game.

There are also problems with the controls. Central to this is the 'anchor' function, in which the princess lowers her center of gravity so she can drag the cart up cliffs without sliding. It's mapped to 'down' on the controller rather than a button, so it's too easy to press slightly left or right and wind up falling off a ledge. It's annoying at the best of times, and controller-throwingly frustrating during slippery floor levels.

Also annoying is the developers' decision to not pull the camera back during cart-racing sequences. There are a few points where the player rides the coffin down long, fast tunnels, vaulting over and dangling under obstacles. The issue is that the camera stays the normal distance away from the action, and there's simply not enough time to react. The player will find themselves slamming into walls and stopping the cart dead until they slowly clamber over yet another obstacle. It's poor design.

I have to assume the developers were aware of the game's shortcomings, since the new DLC package 'Royal Gadget Pack' does an incredible job of wallpapering over the problems.

Seemingly designed to respond to complaints of difficulty, the Gadget Pack adds tools that take some sting out of hard platforming sequences. There are boots to make walking on ice a breeze, an invulnerability bubble for lava-diving, and best of all, a teleporter that warps the cart back to safety when it gets into sticky situations. The player can only equip one of these items at a time and it may take a little while to figure out which works best on which level, but with this DLC, the game goes from hair-pullingly difficult to challenging-but-accessible.

In its base form, Chariot is cute but frustrating—a great idea with a lot of flaws. If players are willing to spend an extra few dollars, it transforms into the game it probably should have been in the first place. I'm not comfortable with the idea of devs charging extra for a fixed version of the game, but I can't deny that it's a better experience with the added gadgets. It would have to be tweaked a lot further to work as a good co-op title, but for now, anyone looking for a bit of challenge in an interesting setting can do a lot worse than Chariot. Rating: 6 out of 10. With DLC, raise it to 7.5 out of 10


Disclosures: This game was obtained via publisher and reviewed on the Xbox One. Approximately 10 hours of play were devoted to single-player modes (completed 1 time) and 2 hours of play in multiplayer modes.

Parents: According to the ESRB, this game contains mild fantasy violence. Completely safe for kids. The monsters aren't scary, and killing them isn't scarring. It's a little frustrating for those without great fine motor control, so make sure your kids are pretty good at games before getting them this one. Maybe not something for two kids to play together, though—I see it leading to fights.

Deaf & Hard of Hearing: There are subtitles for all dialogue and not audio cues! Go nuts!